I continue to wrack my brain for an idea for an adventure that is "perfect" to both to introduce new players to D&D and which also serves as the "perfect" introduction to the Silver Marches: In Search of the Unknown campaign.

There are elements of my ideas for, inter alia, B1 In Search of the Unknown, Riding the River Rauvin (Part One and Part Two),  Raiders of Galath's Roost, The Shattered Circle, and The Sunless Citadel that I really like and which I think would work but, in each case, my tendency to over-complicate the issues relating to plot makes me think that they may not be really suitable starting adventures after all.And, of course, I have no idea who the final players will be or what characters they will choose so I am flying blind on that front as well.

Nevertheless, I keep going back to the AD&D well to see what I can find and now I am thinking about the classic dungeon that appeared in the first (and now legendary) Dungeon Master's Guide. It was subsequently updated into a full adventure - Dungeon of the Fire Opal - in Dungeon 84 and the map was updated from the simply B&W of AD&D to full colour: 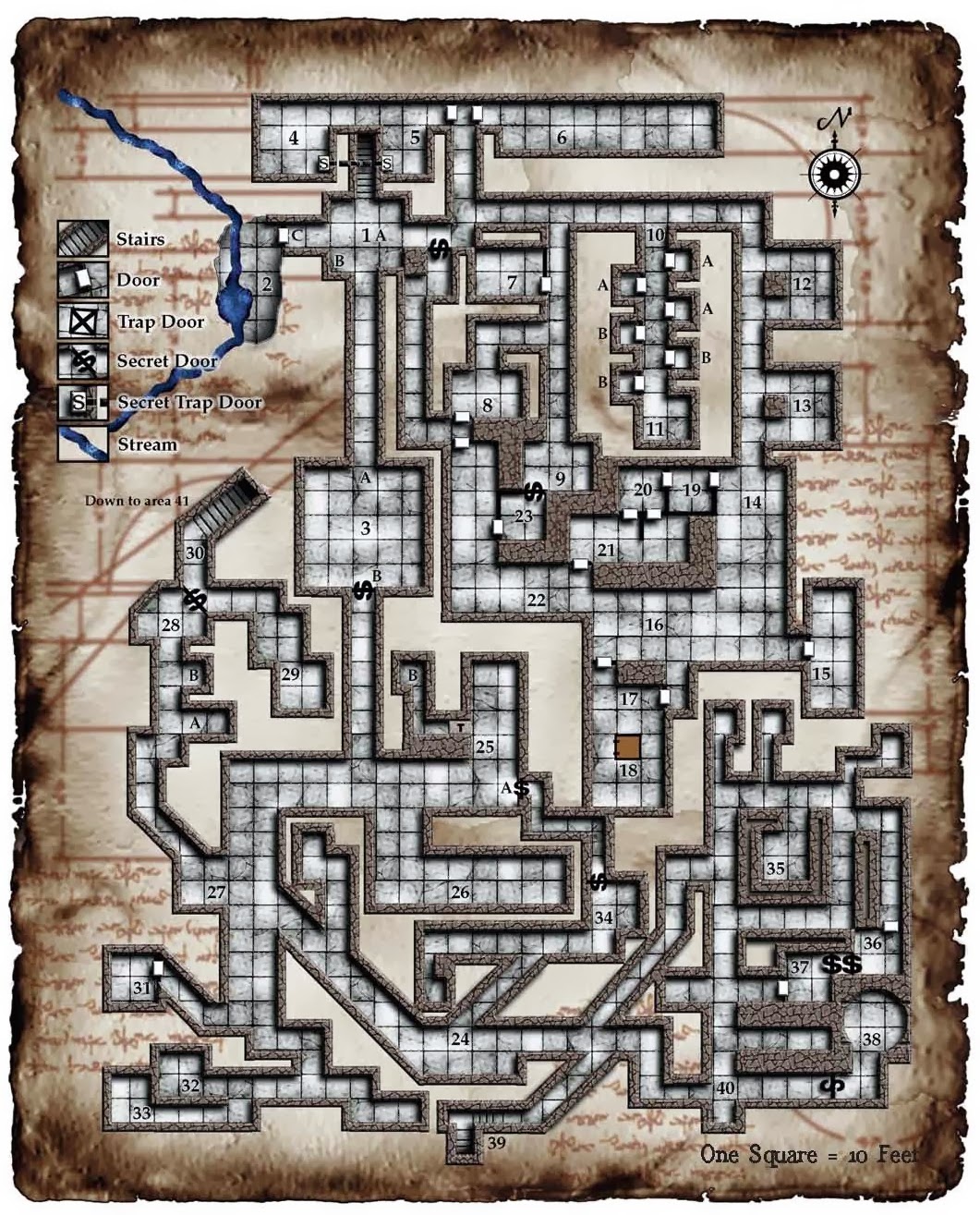 In some ways, this is the classic D&D dungeon and an entire generation of DMs grew up looking at it and, no doubt, making it their own. I wonder if I could use that here? Here, of course, being Rauvinwatch Keep.
This is what 3E's Silver Marches has to say about Rauvinwatch Keep:

About fifteen miles west of Silverymoon, on a great spur of rock overlooking the Rauvin, stands an old watchtower and keep that dominates the river below. Raised two hundred years ago to guard Silverymoon against the approach of enemies by road or river up the Rauvin Vale, the keep has always been something of a white elephant, never manned with a full garrison or maintained as well as it should have been. It has found a new purpose as the headquarters of the recently formed Argent Legion, the army of the confederation of the Silver Marches, under the command of Alustriel's son, High Marshal Methrammar Aerasumé.

More than four hundred soldiers, nearly half the strength of the Legion, are housed and trained here. Most are Shieldsar from Sundabar, but contingents of dwarves from Mithral Hall and Citadel Felbarr make up a significant portion of the force. The Legion garrison joins with the Knights in Silver in patrolling the lands west of Silverymoon, but they spend most of their time training.

And that's all the Realmslore I can find relating to this location, although I did find this interesting depiction of it on deviantART by ElmUnderleaf: 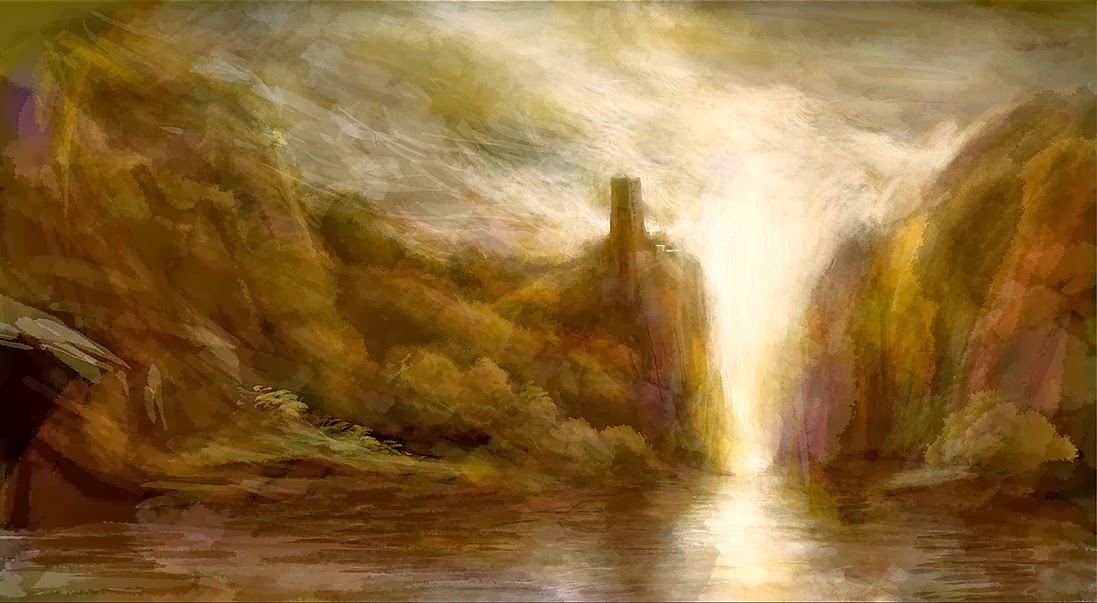 One of the reasons I am interested in Rauvinwatch Keep as an adventuring location is that, even though many old schoolers (in particular) would argue that RPGs are best played in the "theatre of the mind", there is a lot to be said for using miniatures and terrain to bring an encounter or adventure alive.

Looking through my collection of battlemaps, I noticed the rather excellent Keep of Fallen Kings from Fantastic Locations: Field of Ruins:

Instead of Rauvinwatch Keep being an operational fort defending Silverymoon, it is instead a ruin, destroyed by a band of hill giants plus orcs with siege engines some years or even decades ago... but the dungeons could still be intact... and could be based on the map of what subsequently become known as the Dungeon of the Fire Opal.

And now to put this together using the six-point checklist provided by Raging Swan Press....

The Ruins of Rauvinwatch Keep

Original Purpose of the Dungeon

Rauvinwatch Keep was built to guard the western approaches to Silverymoon, particularly the threat of troll and giant attacks from the Evermoors.
Who Built the Dungeon

The dungeon was built by dwarven stonemasons from Sundabar but paid for by the major cities and settlements of the Silver Marches.
Current Purpose of the Dungeon

The ruins of Rauvinwatch Keep serve as the lair of a fairly stupid white dragon which is, nevertheless, cunning enough to recognise that it is close to Silverymoon and it needs to be circumspect about marauding in line of sight of the Gem of the North.
Dungeon Inhabitants

As noted, the ruins are the lair of a white dragon. The dragon was from the Frost Hills but driven out by its more powerful siblings. If it is still alive by the time it is summer, it will fly north to find more suitable weather.

A band of orcs has spent the winter in the dungeons of the ruins. They pay tribute to the dragon in the form of food and also a cut of the treasure from their raids.

Finally, the dungeon also includes catacombs where dead soldiers were once interred. Because of some nameless evil, some of those dead soldiers now walk as undead.
History of the Dungeon

As noted above, Rauvinwatch Keep was built to, inter alia, watch for troll and giant attacks from the Evermoors but, some two or more decades ago, it fell to a siege by hill giants plus orc mercenaries using siege engines.

Since then it has sometimes served as a bandit roost or orc lair; since the beginning of last winter it has served as both the lair of a white dragon and a lair of its orc allies.

The severe winter has meant that the rulers of Silverymoon have largely ignored reports of a dragon in the ruins of Rauvinwatch Keep but the arrival of spring means that getting rid of the dragon is now a priority.

Rather than sending out the Knights in Silver, most of whom are required to clear the more important Silverymoon Pass, the rulers of Silverymoon have put out a call for adventurers to clear the ruins. This is not just to get rid of the dragon but to prepare for the arrival of dwarven stonemasons from Sundabar who are waiting for the Silverymoon Pass to be cleared so that they can come and rebuild Rauvinwatch Keep.

While I am not sure if I would or will use the maps I have posted above, I think the location as outlined has some potential as a starter adventure. The hook is simple - clear these ruins because a dragon poses a threat and they will soon be rebuilt - plus, unlike any of my other ideas, this one actually includes both a dungeon and a dragon. It also reminds me of the short introductory adventure in the 4E Dungeon Master's Guide, although I am using orcs rather than kobolds.

And one of the reasons I want to include a white dragon is so that I can use this particular picture: 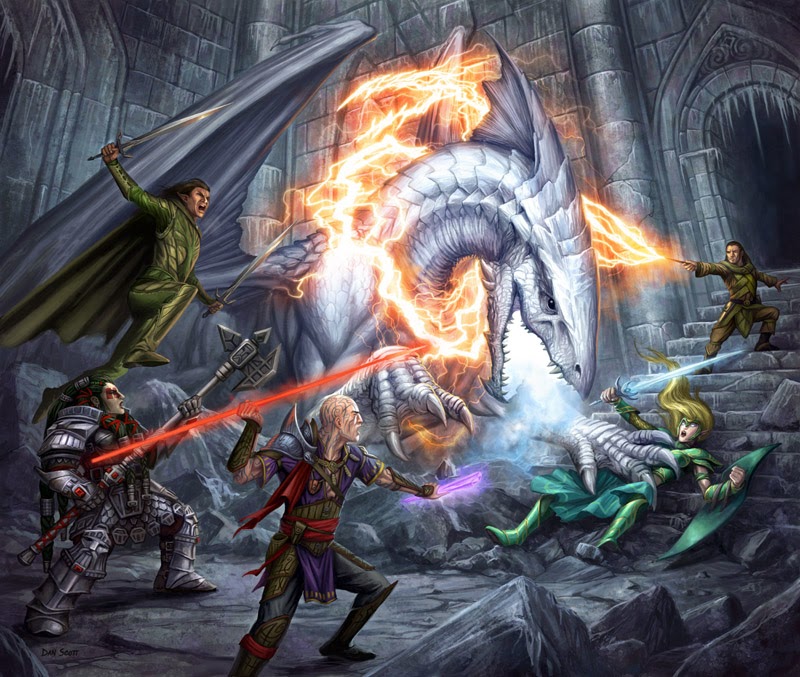 This is one of those pieces of 4E art that I think really captures what the edition is all about (and, because I like 4E, I mean that in a very positive sense).

Anyway, there's a dungeon, there's a dragon: that's probably a better introduction to D&D than anything else.
Posted by Scrivener of Doom at 21:55