My plan is to begin this campaign in Silverymoon and the proximity of the Silverwood, and the lack of existing lore, seems to make it a perfect location in which to place one or more starter adventures. A previous post suggested a modified version of Raiders of Galath's Roost and this post will offer up some suggestions for using adapting the Sunless Citadel as a low-level adventure in the Silverwood.

Sunless Citadel was the first adventure published by WotC for the then new edition of D&D, 3E, and it is now more than 13 years old! It also features highly in lists of the best D&D adventures published from time-to-time.

My previous posts in this series have been really half-baked in terms of their suggestions about how to adapt adventures for a 4E-powered sandbox set in the Silver Marches; I am planning to put a bit more effort into this post so that it may be, hopefully, more useful for anyone reading along... and, perhaps more importantly, something that I can use largely "as is" for my game.

I'll start by posting copies of the maps from a rather useful site. Firstly, here's a cutaway side view showing the vertical layout of the dungeon:

Then we have the upper level, also known as the Fortress Level: 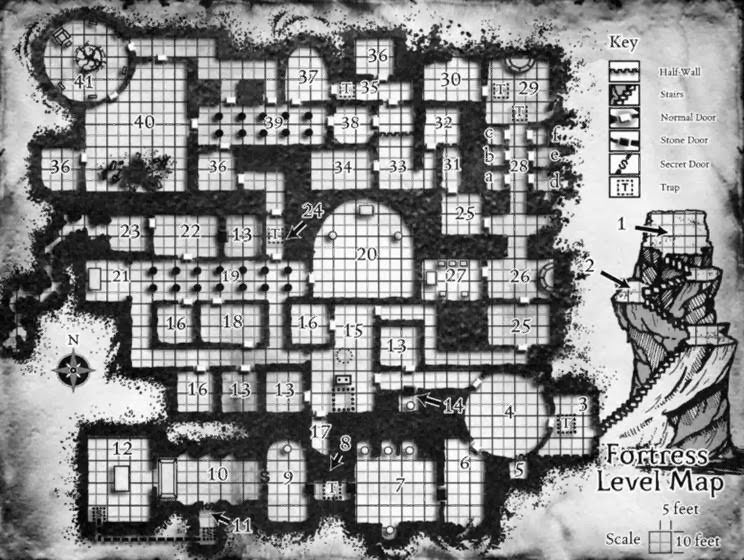 Finally we have the level I am more interested in for story reasons, the lower level or Grove Level: 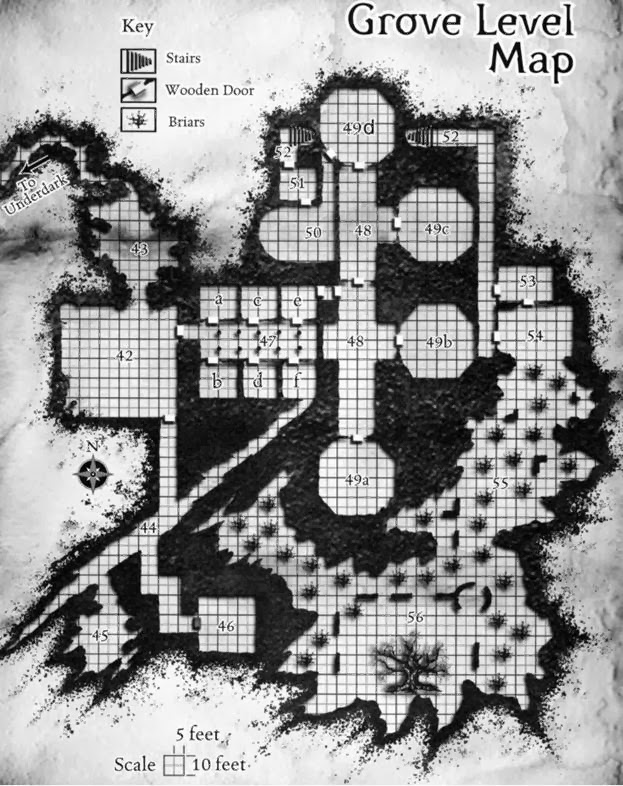 I must admit, this is far more rooms/encounter areas than I like for any version of D&D, but I am hoping I can make this adventure as much - if not more - about exploration and interaction that simply about combat, especially as I am going to aim this as new players.

Designing (or Re-designing) the Dungeon

I designed my first adventure in 1981 but I am always looking at new design paradigms, checklists etc... that I can use to try and improve my designs. Since 3.xE - and now also with 4E - my adventures have become much simpler, typically involving three (or, at the most, five) encounters and a lot more interaction with NPCs etc.... However, I think with this adaptation of Sunless Citadel, particularly in the context of wanting to adapt it for new players, I need to go back to basics... and looking at those maps, I also need to fill in a lot more space.

One of my favourite RPG publishers is Raging Swan Press. Even though their products are for Pathfinder rather than 4E, I find lots of ideas I can use in my 4E games (and, no doubt, that experience will be the same when I finally get around to running 13th Age).

In a recent post on the Raging Swan Press blog, the following was posted as a list of things to consider before sitting down to formally design your dungeon:

When designing a dungeon, consider the following factors:

I think working through that list is as good a place to start as any but, before I do so, I should mention what has attracted me to Sunless Citadel and why I want to include it in my Silver Marches sandbox (aka In Search of the Unknown).

A fews days ago, I posted a revised introduction which included a brief outline for my plans to include Lolth's Demon Weave and similar elements from the Rise of the Underdark RSE that WotC never did quite finish or bring to life. (But I am grateful that they at least started it because, without it, I wouldn't have Mike Schley's excellent map of the Silver Marches and would be stuck with the unprofessional stain that is the 4E version of the same.)

In 2E's excellent Faiths & Avatars, it mentions that the dead deity Moander is sometimes impersonated by Lolth because the Queen of Spiders believes that this may be a way she can make in-roads into being worshipped by the surface elves (and, in 4E, eladrin). I want to use this idea in the context of Lolth's plans for the Demon Weave because I think it makes sense in this campaign set, as it is, in lands once held by the elven empire of Aryvandaar which was notable for the way it embraced evil unlike most elven realms. And while, canonically, that evil was the fallen solar Malkizid, I somehow think that the subtle corruption of Moander was also one of the reasons the Branded King was able to become so influential.

So what's the relationship to the Sunless Citadel? The Grove Level of the Sunless Citadel includes a tree that, according to the adventure, was formed from a stake that pierced a vampire's heart. I want to change that to make it a tree that grew from a sliver or seed of Moander's essence and which is now awakening and, simply put, is hungry. And the cult of Moander that has formed around it must keep it fed.

And, on that note, let me tackle the rest by using Raging Swan Press's list:

Original Purpose of the Dungeon
The Sunless Citadel was built as a place where the evil eladrin of House Aelerothi from the kingdom of Eaerlann could retreat to worship Moander in secret and perform their corrupt arcane research.

Who Built the Dungeon
The dungeon was built by dwarven and gnome slaves of House Aelerothi supplemented by the heavy labour of summoned earth elementals.
Current Purpose of the Dungeon
The Sunless Citadel is, once again, being used as a temple of Moander and, more particularly, to house a cult dedicated to Moander and to nurturing the Spawn of Moander, a treant grown from a seed of the Darkbringer.
Dungeon Inhabitants
The cult of Moander represent the major inhabitants of the Sunless Citadel. The cult is led by a crazed druid and his or her acolytes, but has also attracted a group of murderous brigands who rely on the cult for magic and healing which the cult provides in exchange for captives that they can feed to the Spawn of Moander.
History of the Dungeon
The Sunless Citadel was built around 2,000 years ago during the time of Eaerlann's ascendancy. It was built near to Eaerlann's western border in order to minimise the attention of the those eladrin and elves who remained faithful to the Seldarine.
An earthquake caused into to sink further into the earth and, indeed, removed any access but an underground stream recently caused the ground to subside and the subsequent defile that was created exposed the entrance of the Sunless Citadel once again.

The druid heard the Darkbringer's whispers and, once again, the Sunless Citadel is the centre of a nascent cult of Moander.

Upcoming Events
Lolth's manipulations across the Silver Marches have stirred up the Eldreth Veluuthra. Its leaders do not realise that they are merely pawns being used by the Queen of Spiders; instead, they think that they are getting ready to cleanse Luruar of the human stain. (Also, developing the kernel of an idea inspired by 2E's Curse of the Azure Bonds and the artefact known as the Gauntlets of Moander that play such an important role in that adventure, I rather like the idea that a Moanderite relic is the key to Lolth being able to corrupt the wards of Silverymoon and thus turn the mythal-like protections of the Gem of the North into more fuel for her Demon Weave.)

I've been racking my brain for the things that make a good starter adventure, and which make a good starter adventure for 4E. I'm not completely sure what the answer is/answers are. Part of the problem is that I am operating in a little bit of a vacuum because I don't know what characters the players will create and thus I don't know their backstories or motivations or the other bits of background I could otherwise hook into to make the adventure (and, indeed, the campaign) come personally alive for them.

That said, I think this is a fairly good start. I've got several factions - the human and half-orc bandits, the human cult of Moander, the eladrin and elven Eldreth Veluuthra - which can be both fought and interacted with. The fact that the Sunless Citadel was a temple of a fairly mysterious chaotic evil deity gives me a chance to include some weirdness that might not be out of place in, say, WG4 Forgotten Temple of Tharizdun and I hope that helps scratch the exploration itch.
I'm also thinking of a few key NPCs. The first is the druid that tends the Spawn of Moander. I could simply go with Belak the Outcast from the original Sunless Citadel, or I could go with one of the blightlords of Talona from 3.xE's Unapproachable East. I rather like the second option as the picture of the blightlord from Unapproachable East also has a corresponding picture of a corrupted treant which not only matches how I see the Spawn of Moander, my second key NPC, but it also inspired the blackroot treant miniature which is part of my collection of miniatures and thus I can use it when I run this adventure. And I think a third key NPC could be an eladrin arcanist (bladesinger? wizard? warlock?) who belongs to the Eldreth Veluuthra but who is, in truth, not only a disguised fey'ri but also a scion of the Aelerothi family that built the Sunless Citadel.

Finally, Sunless Citadel includes a strange encounter with a troll trapped inside a dragon-shaped sarcophagus. That doesn't work for me but I rather like the idea of an Aelerothi eladrin mummy inside a sarcophagus which is not only undead but which is a plant-like monstrosity infected by a seed of Moander. This is not meant to be a particularly key encounter but should serve a role similar to that played by the Immortal King in the original Caverns of Thracia: it's a rather deadly, but ultimately rewarding, "bonus" encounter.

As an introduction to D&D, I should also include some traps and tricks. I am thinking that these should be fairly magical in nature - portal-based traps seem ideal - rather than mechanical. Dwarven slaves may have built the complex, but it was an eladrin architect who designed it.

I must admit, answering those six questions is a great way to organise one's thoughts about a dungeon and, I think, a great start to the design process. I will definitely use this list again and I think it is particularly helpful when one is seeking to adapt, convert and/or plagiarise an existing adventure.
But before this is going to be ready to run, I think I have to put in a bit more work into making this interesting for first time players. I'll use the (relatively0 new WotC model of trying to balance interaction, exploration and combat but based on the framework that is already here.