I've been trying to write a first adventure for this campaign - currently entitled Adytum of the Skull and based off the map for Paizo's Crypt of the Everflame - but it's more difficult to write something not having any idea of who or what the characters will be, doubly so when this is being written for a group of people whose sole exposure to RPGs comes in the form of the MMORPG Defence of the Ancients aka DotA.

Off the back of that lack of experience, I've also decided that it would be best to create the characters myself with each one based on a miniature that I have in my collection. My plan is to lay out the miniatures before the players, give some rough background information, answer any questions they might have, and then let them choose one character each.

The group will be made up of at least three players with four or five being a possibility. I've spent a couple of hours preparing character sheets tonight - 4E might be complicated but the Character Builder is just so useful! - and thought I would post some of the details of the characters here.

With the exception of the changeling rogue, the characters are fairly heroic in nature and the changeling could easily be redeemed. I expect that this will be very much a Good vs Evil campaign with the players firmly on the side of Good. 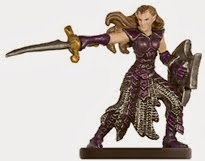 Aloevan Amarillis is the scion of a moon elf (aka eladrin) house known for its members' penchant for leaving Evermeet to explore Faerûn. That's what Aloevan has done, and she seeks not only adventure but the remains of the ancient elven heritage in the Silver Marches from the kingdoms of Iliyanbruen, Eaerlann, and Aryvandaar.

Aloevan has also studied eladrin battle tactics at Silverymoon's College of War and, as a result, is a gifted battle strategist and tactician. Her primary concern as a result of her studies is the risk to the Silver Marches of another orc horde and she believes that the eladrin have a particular responsibility to remind the folk of Luruar of this threat and also to help them prepare for, or possibly even prevent, the next horde.

It is a tradition among the youth of the eastern land of Rashemen to embark on a year-long quest to explore other parts of Faerûn when they come of age. This quest is known as the Dajemma.

Elassa was not born Rashemen. Rather she was born a slave in the land of Thay, the nation of the Red Wizards, but she was rescued from slavery by a band of brave Rashemmi berserkers who, at the direction of the masked Wychlaran of Rashemen who lead them, often raid into Thay seeking to disrupt the evil sorcery of the Red Wizards and free any slaves that they may find.

For the next five years after finding her freedom, Elassa trained as one of the legendary Rashemmi berserkers and heard the thunderous call of the primal spirits. These spirits directed her to the young Wychlaran named Yeveldra and, at their behest, she pledged herself to the young witch as her sworn protector. Thus it was only natural that when Yeveldra went on her Dajemma that Elassa followed.

(If Yeveldra has not been chosen as a character then she is missing and Elassa is looking for her.)

While you are far from the east, and far from the lands of Thay, you have heard rumours of Red Wizards even here in the Silver Marches. If you find them, you will kill them: it's as simple as that for you.

The Hawklin family are a noble family of Cormyr, far to the west, known for the wanderlust of their young scions. While there is no Rashemmi blood in Lalaskra's veins, she shares something of the same desire to embark on a Dajemma and see the world.

Lalaskra has just successfully finished three years as a soldier in the Purple Dragons, the standing army of Cormyr, and has decided to travel to Silverymoon to explore the legendary North exactly as her father, and her father's father, did at the same age.


During her time in the Purple Dragons, Lalaskra frequently had to deal with the menace of the Zhentarim, an evil organisation of mercenaries, assassins, and mad clerics of the evil deity Cyric. They have troubled Cormyr for generations and, no doubt, will continue to do so for many more generations to come. Sometimes Lalaskra dreams of ending their menace once and for all....

All of these words describe Shallar. She has spent her life simply trying to survive on the streets of the cities and other settlements of the Silver Marches, an orphan who never knew her parents or even had a proper adult role model.

Instead she relied on her wits and nimble fingers and, when those failed, her ability to change her form thus giving her an almost impenetrable disguise. But now she has companions and friends: the other PCs whom she has come to know as they have all spent time at the Golden Oak Inn.

Shallar equates money or wealth with survival and she comes across as quite greedy as a result. For now, all that interests here is treasure.

Like all of the Wychlaran of Rashemen, Yeveldra prefers to wear a mask. However, there is no taboo on its removal, rather she simply considers it a normal article of clothing.
Yeveldra's presence in Silverymoon is largely explained by the background provided for Elassa above. There is one fundamental difference: Yeveldra is a seer and she received a vision that caused her to come to Silverymoon in search of a potent magical mask once owned by another Wychlaran some generations ago.
Yeveldra is a devout follower of Selûne the Moonmaiden and thus is fundamentally opposed to Shar, the Lady of Loss and Mistress of the Night. She knows that this mask is somehow connected to the eternal war between the Moonmaiden and her sister Shar and Yeveldra believes that recovering this mask will aid Selûne's cause in this everlasting battle between light and darkness.

She knows that the mask dates back to the time of ancient Netheril and is afraid that it may have fallen once more into Netherese hands - and the Netherese are known to be devout worshippers of Shar - so she plans to follow any hints or rumours of Netherese magic believing that this is the only way the mask will be found.

I will leave personality and mannerisms etc... to the players - obviously - but I may edit in some additional notes about each character's history as I continue refining the first adventure. Obviously, part of that is going to include how they met and decided to join together: as new players, they're going to need assistance with this also.

Yeveldra was the first of the characters that I began thinking about, in part because I liked the art that inspired her miniature (shown here) but also because I love the basic idea behind the Dajemma. Interestingly, all but Shallar are also wanderers. That wasn't deliberate in the case of Aloevan and Lalaskra but was a result of reading the background of the families that they belong to both of which have their own Dajemma-like traditions.
And living in the Philippines where nearly 30% of the working age population have to go overseas to work I imagine that the players will grasp this concept fairly easily!
So far, all my potential players are girls so I am sticking to female characters. Of course, there are five characters and right now I think we're probably going to start with three players. If this happens, I suppose the group will consist of Aloevan (simply because you have to have a leader), Elassa, and Yeveldra. Lalaskra will probably be the fourth choice and Shallar will be the fifth. If we do end up with only three players, I will include two more NPCs which I will stat up as level 1 soldiers rather than creating them as PCs (and I would rather use Adventure Tools to create a monster-like NPC than learn how to create companion characters).

Anyway, now that I have a pool of characters to draw from, I can get back to trying to make the first adventure not suck as much as it currently does....

I thought it might help to have another leader class to choose from so here's a cleric.

Thaerea was raised in the Grey Wolf tribe of the Uthgardt barbarians and she saw the Shar-worshipping Netherese come and corrupt the savage nobility of her tribe into decadent bestial violence. Now the Grey Wolf tribe is but a band of tame werewolves in Netheril's employ.

However, the light of Selûne shone brightly on Thaerea and she was rescued by some adventurers in her early teens and delivered to the temple of Selûne where the silverstars, as Selûne's clerics are properly called, raised her... and also taught her to tame her violent impulses because, like the others of the Grey Wolf tribe, Thaerea is a werewolf.

Nevertheless, Thaerea is also a faithful silverstar and her bestial impulses are under control. That said, she has great difficulty keeping the beast within leashed when she witnesses the depravity and destruction wrought by the Shar-worshipping Netherese. And she believes that, together with the other female adventurers she has met at Silverymoon's Golden Oak Inn, her destiny involves striking a mighty blow against the Mistress of the Night and her Netherese servitors....
Posted by Scrivener of Doom at 00:58