I accidentally posted a very incomplete draft of this adventure a couple of days ago. The adventure is now broken into five parts - this introduction is the first of those five parts - and I will post the other parts as they are done. Hopefully this rewritten version which work out much better than the first draft!

While Pathfinder is not my game, there is no doubt that Paizo has been - and continues to be - very successful with their house-ruled version of 3.5E. (NB: I do not use house-ruled in a disparaging sense but simply to describe what it is.) I know that I still get most of their products for a combination of the ideas and the art.

In my quest to find the perfect introductory adventure for this campaign - more importantly, the perfect introductory adventure for a group of people with no idea that an RPG exists outside of MMORPGs - I thought I should go through the various level 1 Pathfinder adventures I have purchased to see what adventure I might be able to simply convert or otherwise adapt to 4E. I also remembered that I had in my collection of battlemaps the GameMastery Flip-Mat: Dungeon from Paizo which coincidentally and/or conveniently depicts the map of the dungeon in the level 1 adventure Crypt of the Everflame.

I think the visuals of the pre-printed map will work really well for introducing the players to a mini- and grid-heavy game like 4E plus, even though this is not a conversion but essentially a new adventure matched to the map, the adventure includes a lot of things - puzzles, dangers of pits, grappling-based battle etc... - that it can be helpful to introduce to new players. I will definitely keep a lot of those things and some of the descriptions, even as a I change everything else.

Now, with that lengthy introduction out of the way, onward to the Adytum of the Skull....

The Adytum of the Skull 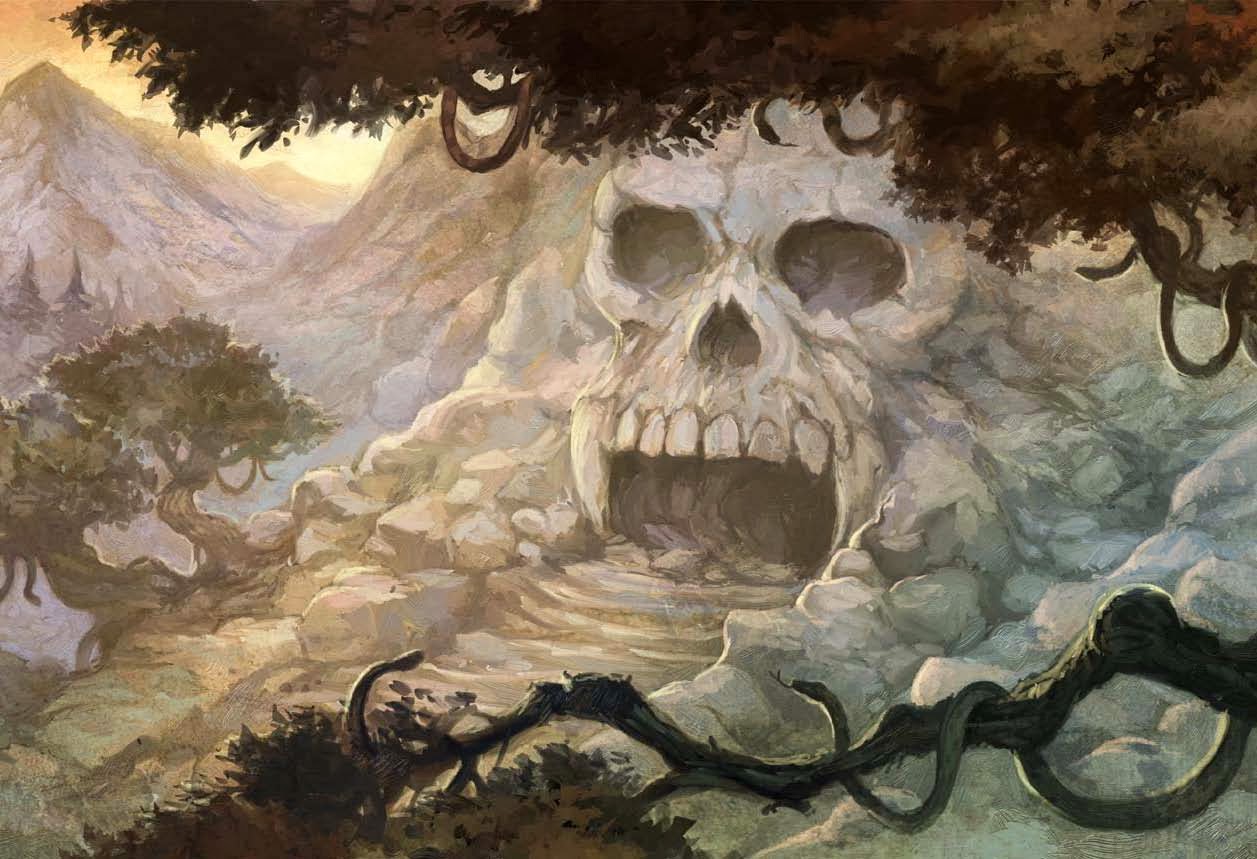 A Zhentarim cleric of Cyric seeks to awaken an ancient evil which may pose a threat to the entire Silver Marches. And in a strange twist of fate, it falls to a band of young adventures to end this threat....

A dungeon. A dragon. A death knight.


The defenders of civilisation in the North watch the orcs of the Silver Marches carefully, always looking for signs that an orc horde is being whelmed as such an event is historically overdue.


And while it seems that the orcs of the North have taken their first steps toward civilisation with the Kingdom of Many-Arrows, those who truly understand what makes an orc an orc know that it will take but a spark to ignite the orcs in a conflagration of destruction that threatens the entire Silver Marches.


The hamadryad Belaerrauna is one of those who watches for such threats in the North. While most of her "watching" is by magical means, she also has her eyes and ears ranging across the Silver Marches watching the orcs and the other major threats such as the Shadovar of Netheril and the newly resurgent Zhentarim of Newfort.


The vale bore signs of having once been inhabited - the ruined foundations of ancient buildings still remained even if the rubble now looked more like natural boulders - and was dominated by a skull-shaped rocky outcrop on a hill 100 or so feet above the surface of the vale.


Mountain goats were plentiful and they were the target of the orc raiders. Unfortunately for the orcs, the goats were well-protected by the goats' very protective goatherd: a rather large and extremely alert ettin. After the two-headed brute reduced the orcs to vulture-food, Nesker returned to Silverymoon to report the existence of the ruins and, more particularly, the skull-shaped outcropping to Belaerrauna. (Nesker will only go underground in an absolute emergency, and generally not when he is alone.)


Based on what Nesker told her, Belaerrauna performed a divination ritual and thus it was revealed that the dungeon beneath the skull-shaped outcropping - more properly, the skull-shaped entrance - held within it the "iron gauntlet of the Black Lord whose release would herald the Black Age of Bane across the Silver Marches".


Profoundly disturbed by what the divination revealed, the hamadryad now needs adventurers to travel to the dungeon and end this threat before it is unleashed across the Silver Marches.


And that's where the PCs come in….


History of the Adytum

The ruins that Nesker found are all that remains of the village of Orlsgate, an outlying settlement of the (original) empire of Netheril best known for its Jergali monastery and the more mysterious Adytum of the Skull in the hills above the village.


Here the Jergali clerics, also known as scriveners of doom performed their sacred tasks of recording the disposition of the dead and similar rites and rituals, and interred many of their most faithful in the catacombs of the Adytum of the Skull, while dwelling in a separate monastery in the village below.


(The word adytum means that part of a shrine where the public were forbidden to enter.)


This all came to an end after the apotheosis of Bane the Black Lord.


The more fanatical of Bane's followers knew that the Black Lord's power - and the power of Bhaal and Myrkul, the two other members of the Dark Three - came from Jergal who strangely surrendered his divine portfolios to Bane, Bhaal, and Myrkul with little resistance.


For the more fanatical Banites, this episode that took place in the mysterious realms of the Astral Sea needed to be played out here in Toril also. As a result, Haldroun Duskmantle, a former paladin of Jergal  who converted to Bane, led a vicious pogrom across the border areas of the empire of Netheril destroying Jergali monasteries, temples and shrines including here at Orlsgate.


While Bane could not directly stop this from happening, he was able to corrupt the curse so that Duskmantle's doom was not tied to the Adytum of the Skull, per se, but to a skull-headed mace wielded by one of the scriveners of doom the Banites had slain. However, when a Banite cleric tried to recover this mace from the body of the dead Jergali at the Black Lord's behest, the mace could not be found.


The mace still exists hidden within the Adytum. If it is found, it can be used to awaken and command Duskmantle who possesses the powers of a death knight. A Cyricist cleric, Halazondar, from within the ranks of the Zhentarim recently discovered a very incomplete version of this tale in the Vault of the Sages in Silverymoon.


Halazondar believes that the skull-headed mace will allow him to awaken and control the death knight, Haldroun Duskmantle, who, in turn, will be able to command the barrow wights and other undead of the Tombs of Deckon Thar thus providing the Zhentarim with a major advantage in their quest to dominate Silverymoon Pass (more of this story will be revealed in the next adventure).


What Halazondar does not realise is that the returned death knight is an avowed Banite who will eventually shake off the control that the mace will initially afford.


With the coming of spring, Halazondar is making plans to set out from Silverymoon (where he has secretly wintered) to find the Adytum of the Skull. With Zhentarim soldiers in tow, the Cyricist will arrive in the vale just before the PCs finally exit the Adytum….

Hired by (see adventure hooks), the PCs prepare to travel roughly half-a-day to the east of Silverymoon, into the foothills of the Nether Mountains. While it is spring, it is only the very beginning so the weather is quite cold plus there are spring rains and lots of groundwater from melting snow.

There is no road to follow, only directions and landmarks, but the PCs soon find themselves in the hills and under attack by orcs. They may have been ambushed, or clever play (with appropriate skill checks) may have resulting in the PCs doing the ambushing, but eventually the orcs are defeated and the PCs continue on.

Eventually the PCs come to a fairly flat vale overlooked by a skull-shaped structure in the hill above. Mountain goats are common and eventually they encounter the acid-scarred goatherd, an ettin named Gorbash Ghamorz. They may defeat the ettin in battle or they may negotiate with him/them to defeat the black dragon that dwells in the entrance to the Adytum of the Skull: in the latter case, the real reward is being forewarned of the dragon's existence.

The PCs may rest at this point or may push on into the Adytum. Ultimately, though, they enter the Adytum through its broken doors and encounter the very young black dragon known as Skullface. The defeat of the black dragon allows them to press on. The dungeon is explored, various undead and other creatures (possibly including the mercenaries known as the Whiteskulls) are deal with, culminating in what is likely to be the final encounter: a grand melee with the cursed undead warlord, Haldroun Duskmantle:
The PCs may then choose to explore some more in order to complete their major quest(s) and then they will (most likely) return to Silverymoon for their rewards. One small problem though: the return journey will see an attack by a large group of orcs which will eventually be complicated by the arrival of a young bulette drawn to the commotion. After that, their return home is safe and peaceful.

A Quick Note on the Maps

I'm not really sure of Paizo's policy on posting maps directly from the adventure so the maps I've posted - with the large SAMPLE watermark through them - are publicly available on Paizo's site here and here. Suffice to say, if you like the ideas behind this adventure, you're going to need to buy either the GameMastery Flip-Mat: Dungeon and/or Crypt of the Everflame from Paizo.

I will post all the stat blocks in separate posts but I will just note the monster levels and types here. Please note that I use AD&D hit dice to work out the level of a monster simply because it gives me a much larger variety of creatures to use in Heroic Tier - and early Paragon Tier, if necessary - where I prefer to run my games.

And, frankly, I just find it makes more sense but I am also conditioned by many years of the pre-4E versions of D&D.
Links


Here are the links to the other parts of the adventure: