3.5E's The Twilight Tomb was published as an adventure for level 3 characters. It was set in the Yuirwood of Aglarond and tied into that nation's own sub-race of elves, the star elves. Despite this, it is easy enough to transplant into another elven - or, in 4E terms, eladrin - land and still use it largely "as is".

It's also particularly interesting from a sandbox perspective because the PCs are actually trapped in the titular Twilight Tomb, a demiplane which, in 4E terms, is something like a bubble in the Feywild and their goal becomes that of escape. That basic set-up makes it fairly easy to add into a campaign, especially one that is more sandbox in nature. In fact, all that is required is a forest with a connection to the eladrin and/or elves and a stonehenge-like circle. As most of the forests of the Silver Marches were once part of the eladrin kingdom of Eaerlann or the empire of Aryvandaar, I could choose almost anywhere and it would make sense.

Rather than regurgitate the adventure's background and synopsis and then provide some thoughts on how it might be adapted to the basic idea I have for this campaign, I thought that as a single location that it might be better to simply use the questionnaire included with Raging Swan Press's Dungeon Design I blog post and do it all at once:

Original Purpose of the Dungeon:  Originally part of the Feywild demesne of the evil eladrin wizard Mourel Duskwalker of Eaerlann, it was turned into a demiplane and a tomb for the eladrin after he was slain by eladrin high mages for the great evil he had wrought by using the power of the Horn of Kotharvuth to summon an aspect of Moander which he then loosed against his enemies. After his death, he was interred by his faithful servants as he was the last of his house.

Who Built the Dungeon: The Twilight Tomb was built by the eladrin House Duskwalker as a place of quiet contemplation and as a graveyard for their fallen. The glass spires were designed to "sing", as it were, in harmony with the movement of the water below, much as some can hear the sound of the sea in a seashell.

Dungeon Inhabitants: When the PCs arrive, they will be almost face-to-face with one of The Twilight Tomb's inhabitants, the animated skeletal remains of the black dragon Kotharvuth:

The contested tower is the former library of House Duskwalker and it is now inhabited by a yochlol thrall of Lolth searching for the Horn of Kotharvuth:

The Redoubt of the Nilshai contains what used to be teleportation circles which were corrupted by the high magic ritual that created the demiplane. That allowed a nilshai to travel through and it now seeks to expand the portal to the Far Realm but also open another portal to Toril: 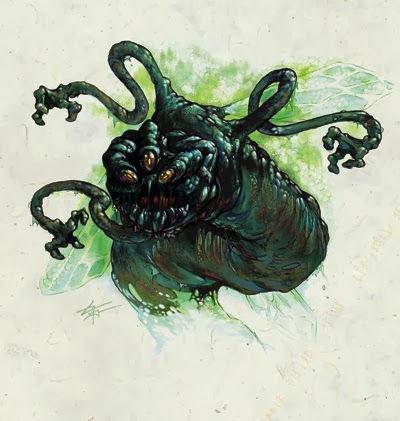 Mourel's Tomb is, more accurately, the tomb of all the Duskwalkers but Mourel's tomb is by far the largest and most ornate. However, Mourel is not dead: he is undead. He exists as a brain-in-a-jar concealed within the chest of flesh golem girallon: 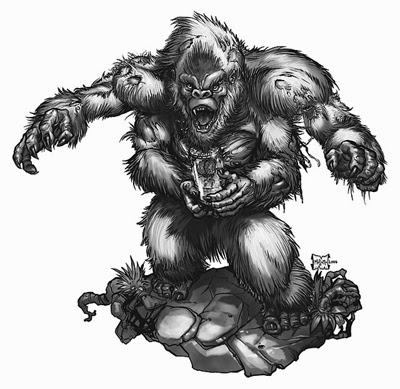 Finally, the Portal Control Centre contains the only way to return to Toril but it is guarded by a giant crystal golem (new monster) created by eladrin high mages:

History of the Dungeon: This has been covered already.

Upcoming Events: Rather than calling this section Upcoming Events, I could actually call it Why Is This Location Important Right Now? The undead Mourel Duskwalker possesses the Horn of Kotharvuth. Lolth wants this because it could play an important role in the creation of the Demon Weave and thus she has sent one of her handmaidens, a yochlol, rather than entrusting the mission to one of her drow.

This is the Horn of Kotharvuth:

The Horn of Kotharvuth was crafted from the remains of the mighty black dragon Kotharvuth - a name which translates as The Black Fiend - who was a Chosen of Moander during the time of Eaerlann and who possesses phenomenal powers of corruption beyond those of other black dragons. His Horn retains some of those powers.

My gut reaction to re-reading this adventure is to actually mash it up with The Shattered Circle - which also features a stonehenge-like circle - and trick or lure the PCs into activating the portal that will bring them to The Twilight Tomb. Perhaps it's the only way to escape a particularly fierce monster or perhaps an evil eladrin warlock from the Eldreth Veluuthra is able to force them through the portal?

As heavy-handed as that could be, it's also something different in the context of the way I DM and it might be fun to try.

Alternatively, if the PCs are on the trail of a drow (actually a yochlol) seeking out old Moanderite relics, perhaps they are able to trace her to the stone circle and then discover and activate the portal before finding themselves trapped in The Twilight Tomb and further discovering that the drow they thought they were following is a yochlol.

Anyway, the nature of the adventure just makes it a nice back-up location for any sort of sandbox set in an area of elven forests. It's a good adventure to fall back on when not much else is happening.
Posted by Scrivener of Doom at 22:20