There is a perception that there was a lot of absolute dross produced during the AD&D 2E glut as TSR tried to stay afloat after a decade or more of complete mismanagement. And that's probably true but there are some absolute gems - diamonds in the rough, as it were - that are easily overlooked from that time. The Shattered Circle, IMO, is one of those.


Here is the cover which links to its page on dndclassic.com despite not currently being available for sale:

Despite being published toward the end of 2E's lifespan, this is, in many ways, a classic 1E adventure. There is essentially no plot or story: this is simply an interesting location that is ready to be explored and with room for a DM to add his own plot on top, should he so desire.

Here's the upper-level and side-view of the entire dungeon:

The dungeon is supposed to be an ancient ruin. In a Forgotten Realms context, I would make it date back to the time of the Creator Races and, more specifically, make it a sarrukh ruin. (The sarrukh were the reptilian creator race and, inter alia, the creators of the Serpentfolk. They were more fully described in the excellent Serpent Kingdoms.) But the dungeon, with its upper level and lower levels are not the real attraction of this adventure. This is:


Right in the centre of the dungeon, between the two levels of ancient ruins, is this web-city of the chitine. The chitine are a spider-like race of humanoids created by the drow as part of some sort of experiment perhaps to create a slave race. The backstory is not so important: I just love the fact that the PCs explore this dungeon and suddenly discover a giant spider egg-sac turned into a city.

Here's the rest of the dungeon:

The web-city is not mapped but it probably doesn't need to be. After all, who in their right mind would go in there? What is interesting, though, is if the players decide that they want to destroy the city. Are those webs flammable like spiderwebs? Will a well-placed fireball simply cause the whole thing to go up in flames? Can the webs that are suspending the sac-city in the air be severed by other means?

I think this is one of those situations where I would prefer not to work out the answers in advance. Instead, I think I would rather listen to the players' ideas and simply respond. For now, that's the way I will leave it.

With a web-city in which to live, clearly this dungeon needs to include chitine and probably lots of them. I think they simply have to represent the majority of encounters. I haven't decided on what level they should be: they're level 5 in 4E (IIRC) and they began as a 2 hit dice monster when introduced in 2E. I'm inclined to make them level 2 to match their 2E hit dice and also because I see this as an early adventure for levels 1-3 (although it does look tough for level 1; perhaps levels 2-4 instead?). 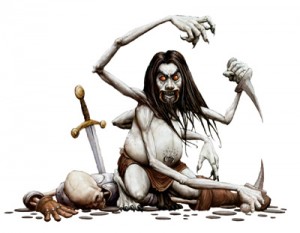 The chitine are ruled by a priestess class - no doubt inspired by the priestess-rulers of the drow - called choldrith which seemed to have been introduced in 3E with 4 hit dice. They appear like this: 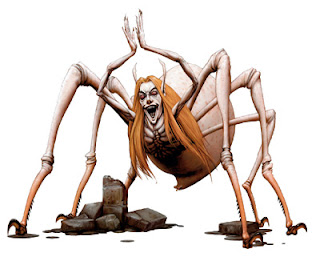 One of these could be the queen at the centre of the web-city and she would only be seen if the PCs were captured and brought before her and/or they decided to try and destroy her city. From memory, they were noted somewhere as being able to control carrion crawlers. Anyway, assuming that these spiderfolk have a spider's appetite for blood, that suggests that the husks of bodies will be thrown away. This could easily attract carrion crawlers and similar garbage-eating creatures.

One of the key conceits of the original adventure was that a powerful, immovable artefact had been discovered where it had been buried - and it is powerless when buried - called The Foundingstone. One of this object's powers was the ability to reach back into the past and summon creatures that existed at that time. In the adventure, this is used to explain the appearance of, inter alia, dinosaurs.

While I normally avoid anything related to time travel, I quite like this in the context of this being the ruins of some sarrukh-created facility. It's also a good excuse for having monsters "respawn" and then the PCs face a fresh challenge: how to prevent the respawning? And here's The Foundingstone with its werespider guardian (an odd touch, and one I do not plan to keep):

I'm also tempted to include one or more undead sarrukh, inspired by the Immortal King in the classic adventure Caverns of Thracia, and also by this picture:

So, we have chitine, carrion crawlers, dinosaurs from beyond time and a strange serpentfolk mummy. It's enough to start with but it probably need a few extra monster types as well as a lot of dungeon dressing... and the mention of Caverns of Thracia is enough to make me start thinking how easily this site could form the basis of a megadungeon. So very tempting....

In my last post, I provided a revised introduction for this campaign including, inter alia, a plan to include the drow and have them motivated by Lolth's desire to create the Demon Weave and then take the portfolio of magic that previously belonged to Mystra.

An artefact like The Foundingstone would be perfect for the Demon Weave. In fact, it might even be the cornerstone of Lolth's new creation. I've always had the Creator Races possessing a level of magic that has never since been equalled in the Realms and I see The Foundingstone as being of that ilk.

What if the chitine have found it and their choldrith queen has used whatever the 4E equivalent of commune is to seek the advice of Lolth. The Queen of Spiders considers the chitine to be little more than cast-offs so she instructs her favoured drow to come and take The Foundingstone and sacrifice the chitine to her as part of the Demon Weave ritual.

When the PCs begin exploring, the drow also begin exploring too adding another encounter type to the mix. But perhaps The Foundingstone senses the presence of the drow and Lolth's plan for it and so it starts summoning creature's from Toril's distant past to defend itself from the drow and whoever - or whatever - else might try and take its power. Perhaps the undead sarrukh awakens and strikes some sort of bargain with the PCs to drive off the drow?

Like any of my suggestions, it's hardly original but it will probably work as a combination of light plot and backstory. Otherwise, I am at a loss as to why the PCs might continue exploring this location. Even as part of the Demon Weave plot, there's no sense of urgency here; it's just an interesting location.

Finally, I probably should have mentioned this already, but my current plan is to place this within the Silverwood and, if circumstances allow, run it after my homage to Raiders of Galath's Roost or whatever other adventure I decide to use to open the campaign. I just hope that when sit down to write this up properly, I don't find myself getting excited and inspired by the reference to Caverns of Thracia and turning this into a megadungeon....
Posted by Scrivener of Doom at 23:09

Email ThisBlogThis!Share to TwitterShare to FacebookShare to Pinterest
Labels: Drow, In Search of the Unknown, Sandbox, Silver Marches