Silver Marches Sandbox 22 - So, You All Meet in the Golden Oak Inn...

... seems to be a variation on a widely-despised D&D trope but it's one that actually makes sense considering the role that inns, taverns, pubs, and even hotels have played historically in real life to this day.

More importantly, today is considered D&D's 40th birthday or anniversary and it's therefore a day to celebrate such familiar tropes and clichés without which we might not be gaming today.

And, in the context of Silver Marches: In Search of the Unknown, I'm preparing a campaign for a group of people who have never played a tabletop RPG before and, until they saw my books and miniatures, had absolutely no idea that such a thing existed. I just cannot imagine introducing people to D&D without also introducing them to this, one of my most favourite and, indeed, practical D&D tropes.

There is one more trope I am going to tackle here; that of the patron. In the context of a campaign for new players, I think the extra information and direction that a patron can provide will prove to be invaluable for ensuring that the campaign has a sense of momentum. And in this case, the patron and the inn are rather closely intertwined....

Volo's Guide to the North describes this inn as follows:

This excellent, expensive inn is also a temple to Shiallia, a local deity tied to Silvanus and Mielikki. (Be careful not to wantonly destroy seedlings or harm any animal babes while in Silverymoon or the High Forest lest you direly offend her.) I was not allowed near the place.

I was told it’s very beautiful and has a live oak tree growing up through the taproom, with little lanterns hanging down from its boughs over every table. The rain comes in, so in stormy weather the taproom empties quickly to cellars downstairs and meeting rooms that open out from the taproom on all sides, a few steps up.

All the rooms in this inn open off a central atrium dominated by a huge oak that rises up into the open sky. latterns depending from its branches to hang above tables. Dedicated to the deity, Shiallia, the Golden Oak is favoured by druids, rangers, elves, and those who like privacy or peace and quiet. The prices are stiff, but guests can expect superb chamber service.

This historic inn features cozy, rustic rooms, dim flagstoned passages, fragrant herbs, and pots and window boxes full of well-tended plants. All the rooms open off a central atrium dominated by a gargantuan oak that rises into the open sky. The tree’s branches are alight with glimmering lanterns, giving soft light to the tables beneath.

I think the description in Silver Marches is the most useful for my purposes. 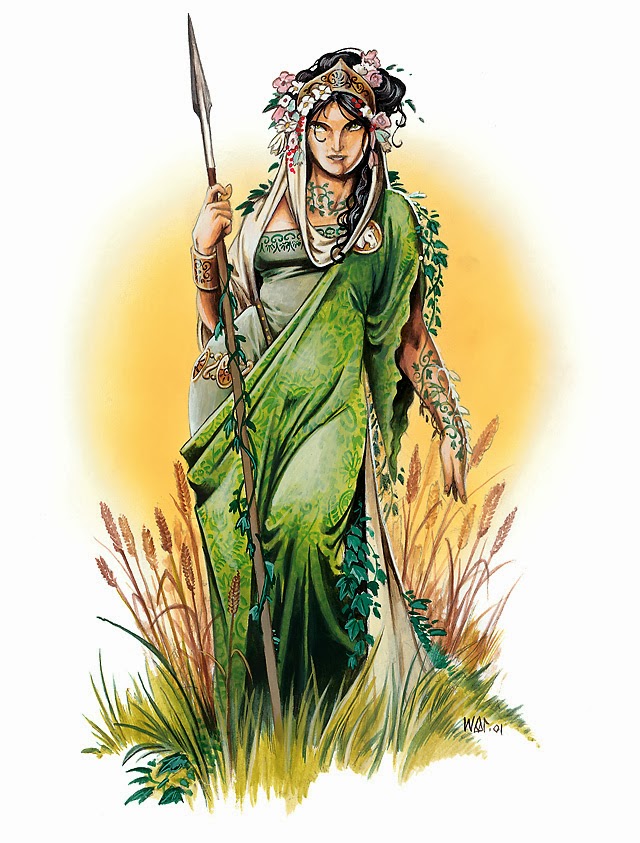 Bel, as her intimates call her, is the latest in a long line of hamadryads worshipping Mielikki, Shiallia, and/or Silvanus who take up residence in the Golden Oak for a number of seasons and use it to learn of what is happening in Silverymoon so that they might be better equipped to deal with the threats to the forests and other natural areas of the Silver Marches.

The principal advantage of dwelling within the Golden Oak is that the Lady is able to take the measure of those who stay in the inn and determine whether her interests and the interests of a particular individual or group may align. In these cases, Bel becomes a patron dispensing quests across the Silver Marches to thwart the depredations of the Netherese, the whelming of an orc horde, the slaving of the Red Wizards, or the general strife of the Zhents. In all of these cases, she is acting to preserve what she sees is the Balance.

The Lady of the Lance has made herself known to the PCs having taking their measure and deciding she likes what she sees. She has effectively become their patron at the beginning of the campaign.

Landivar Telstone (male human ranger) is the master of the Golden Oak Inn. Formerly one of the Mielikki's rangers, Landivar chose a more sedate life as an innkeeper after the touch of a plaguechanged wraith withered his left leg and left him permanently lame (and secretly spellscarred). A friendly dwarf crafted a steel frame (name?) for his withered left leg and that allows him to still get around, albeit a lot slower than in his trailblazing days.

Now in his 50s and retired from the adventuring life for more than two decades, Landivar still remains something of an expert on the geography of the Silver Marches and lands to its north, as well as being very knowledgeable about flora and fauna including orcs, giants, etc....

Landivar is also a worshipper of Shiallia and shows his devotion by rearing a menagerie of orphaned animals in the loft above the inn's stables. Anyone foolish enough to harm his young charges will soon discover he has lost none of his talent with a pair of handaxes....

The PCs begin the campaign as regulars in the Golden Oak Inn. One of the irregular patrons that they recognise is a mysterious loner, a shifter ranger named Nesker (male shifter ranger) who always sits near the oak at the centre of the inn and is frequently observed apparently talking to himself. Landivar is very protective of this particularly customer and dissuades any questions or prying into the shifter's identity or history.

Nesker is a solitary ranger who is tasked by the Lady of the Lance with monitoring the movements of the various orc tribes near Silverymoon. While his bestial features might attract scornful looks from the civilised (but ignorant) folk of Silverymoon, among the orcs those same features remind them that Nesker is not to be trifled with.

He is also held in very high regard by the Knights in Silver who often seek his advice on dealing with orc threats. One of the shamans of Dark Arrow Keep has placed an enormous bounty on Nesker's head in response to the death of the shaman's son as Nesker's hands. The fact that Nesker was protecting simple farmers from an orc raid, of course, means nothing to an orc.

Nesker thoroughly dislikes anything enclosed or underground. Even cities feel wrong to him but he loves the atmosphere at the Golden Oak Inn and this is about the only place he can be found in Silverymoon. When Nesker is seen to be talking to himself he is normally speaking with Belaerrauna. Sometimes, though, he communes with a primal spirit that will occasionally reveal itself through the oak.
The shifter never takes a room when he stays in the Golden Oak Inn. Instead, he is unique in that he is permitted to sleep in the oak's branches which he does after first taking care that none see him doing so.
Other People


The Captain: Knights in Silver.

Excellent quality; elven and eladrin tastes are catered for.

There's treasure to be found at the Abe abbey.
A cougar has escaped from a travelling circus.
The hiding place of The Cavernrot Boys can be found in the the plains.
Celegalad Stonebeam and Firin Firebeard will be fighting a duel tomorrow.
The body of a male dwarf was found in the outhouse of The Cheap Queen. The City Watch says it has all the markings of a crime of opportunity. Examining the wounds on the body, they appear to be caused by fist and open hand. The body appears to be stripped of everything of value. .
There's a reward of 1 gold for badger skins.
The hiding place of The Damnghost Troop can be found in the the hills.
The towns of Oxford and Barnley are having a territorial dispute.
Erestwen Mirrellas the bard was attacked by a manticore in the nearby fields.
Plague has struck the town of Seaham.
Bifur Silvermace, a local wizard needs the heart of a unicorn for "research purposes".
Elemmë Redsmith the mage was attacked by a dragon in the nearby desert.
Dwari, a local wizard needs the heart of a manticore for "research purposes".
The Shadowed Bass House has a sect in town
The body of a male gnome was found in the outhouse of The Tiny Minotaur Resthouse. The City Watch thinks it is a mugging gone wrong. Examining the body, magic was the likely cause of death. No items of worth were found on the body
Daniel Turner has discovered the location of The Scioptic Panopticon of Evil.
Lugrat the shipwright has mysteriously disappeared.
Posted by Scrivener of Doom at 15:55