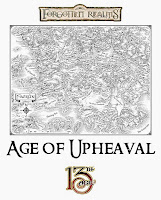 One of the reasons I chose Mike Schley's map of Faerûn for the picture in the campaign's banner is that I am hoping to run Age of Upheaval all over the map. Normally my campaigns focus on a region but in view of the subject matter, in this case I want the PCs to range all over Faerûn.

There is also a certain irony at work here because I not only despised the whole concept of the Time of Troubles, I also thought the Tablets and Fate as well as Ao will silly concepts that the Realms was better off without.

For those who don't know, the Time of Troubles was largely caused by Bane but resulted in his death, but it also resulted in the deaths of the other two members of the Dark Three, as they were called, Bhaal and Myrkul. Bane managed to come back with the events that accompanied the 3E version of the Realms, but both Bhaal and Myrkul are essentially dead. (Essentially is an important qualifier when it comes to Realms deities.)

Immediately after the Time of Troubles, Cyric inherited the powers and portfolios of all three of the Dark Three placing him in the position of being probably the most powerful evil deity. Over time, he lost most of that power and now, of course, he's imprisoned as a result of his role in causing the Spellplague.

I mention all of this because it's important to the overall story of Age of Upheaval. What if:
So, three dead deities and three tiers for the campaign. Here's a rough outline:

Adventurer Tier: The Crown of Horns 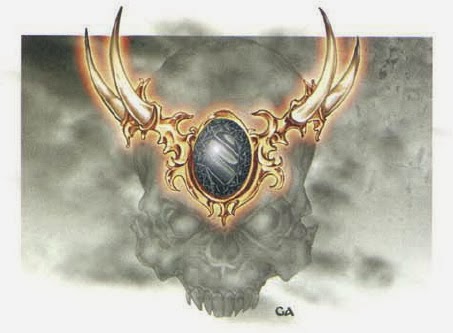 What happens when you mash-up Eye of Myrkul from Dungeon 73 (the fifth adventure in the Mere of Dead Men series, the original Dungeon adventure path), add in the god golem from the 4E super-adventure updating the Tomb of Horrors, and then make Nhyris D'hothek, the yuan-ti lich wearing the Crown of Horns into the BBEG?

The PCs begin in Waterdeep and soon find themselves on the trail of yuan-ti slavers operating out of Downshadow and/or Skullport. Seeking to bring the slaving operation to an end, they follow the trail to the Mere of Dead Men fighting an army of undead, numerous lizardfolk including a lizard king riding a catoblepas, and yuan-ti.

Ultimately they end up in an ancient temple of Myrkul sunken beneath the Mere of Dead Men in the middle of a three-way battle for control - Banites vs Cyricists vs the serpentfolk cultists of the Crown of Horns - or a huge flesh golem crafted from the bodily remains of Myrkul.

What do the PCs do if they win? They will need the aid of one or more Icons - and they will need to choosen carefully - to end the threat posed by Myrkul's remaining power. 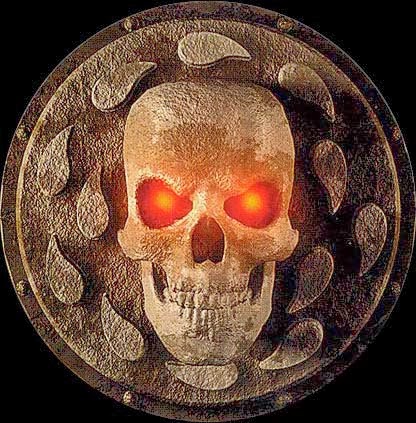 By the end of the Adventurer Tier, the PCs have some idea of what is happening. It may be that they have, for example, travelled to Candlekeep to learn more of the forces that are not only shaping the Realms but shaped the Realms in the past.

That then brings them to Baldur's Gate where I could run some of Murder in Baldur's Gate to introduce the threat posed by Bhaal being awakened again. From there, the adventure leads to the Boareskyr Bridge because Bhaal was slain close by and his black blood still pollutes the water.

This blood possesses significant power such that it could be used in a ritual to corrupt The Companion, the second sun that hovers above Elturel in Elturgard nearby. The Companion is a relic of Amaunator imbued with his power but the Banites, Cyricists and perhaps another faction are seeking to corrupt The Companion and turn it into both a thing of darkness but also a colossal symbol of their deity.

This clash between Cyric and Bane has had an additional effect. The Zhentarim of Darkhold are effectively in a state of civil war between the Cyricist and Banite factions. With clever play, the PCs may be able to use these factions to accomplish their own goals.

Ideally, the Champion Tier concludes with the PCs protecting The Companion from being corrupted and thus earn the gratitude of the paladins of Torm who rule Elturgard. This is important leading into the Epic Tier.... I will address the conclusion first.

Ideally, I would like to see a repeat of the battle between Torm and Bane that took place in Tantras toward the end of the Time of Troubles but, this time, the role of Torm is played by the PCs and they fight Bane in Torm's place (this is why having the gratitude of the paladins - and likely Torm himself - was noted as being important at the end of the Champion Tier).

However, that means that Cyric is no longer in the running. How was he removed from being an agent of influence? Did the PCs travel to another plane, perhaps even his prison? Did they strengthen his bindings?

While I have an endgame in mind, I still haven't thought out how to fill the Epic Tier with things that are truly Epic. That said, I have plenty of time to do so.

Filling in the Blanks

The above is very much a first draft of a campaign arc and is more about providing a general direction that formally serving as a campaign outline. Clearly there is a lot of detail missing particularly in relation to the named NPCs which is what I typically use to shape my campaigns. Also, in a 13th Age context, the role of the other Icons needs to be more carefully considered.

But the general direction is there. I think I will enjoy filling in the blanks. :)
Posted by Scrivener of Doom at 00:13