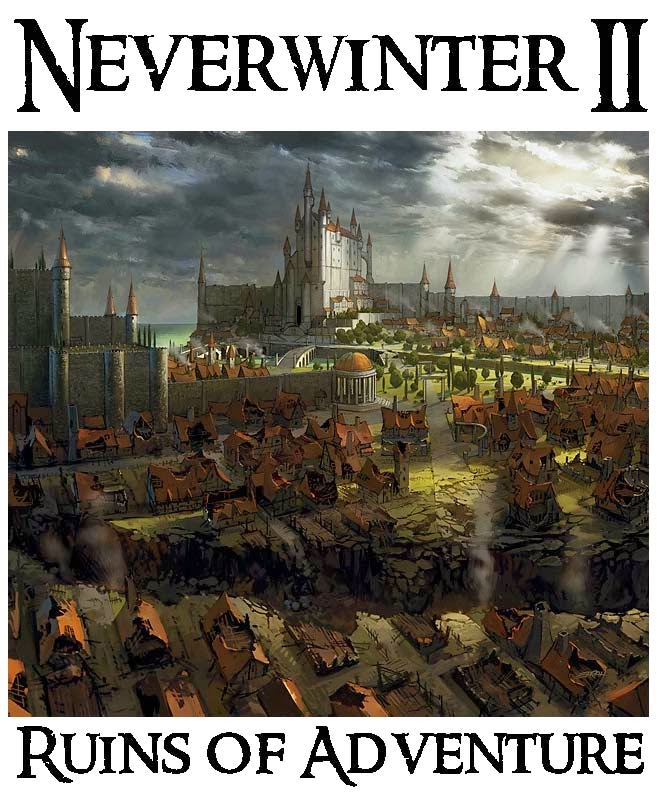 In one sense, this would turn a Neverwinter campaign into something of an old-fashioned OD&D/AD&D hexcrawl where you clear the hexes surrounding the castle you just built because you had achieved "name level" as it was once referred to. I suppose that it is an option, but instead of building a castle, the PCs would take over the rulership of Neverwinter from Lord Neverember. And that still remains a possibility.

But the real point of this post is to offer up some ideas for BBEGs - different to the ones employed in Neverwinter I: Year of the Ageless One - and their goals to give the Neverwinter II: Ruins of Adventure campaign a bit of plot/metaplot/backstory support.

The first campaign that I ran in 3E all the way to its conclusion around level 23 or so was an adaptation of the 2E boxed set adventure Night Below.


It was fairly heavily modified but the basic plot remained in place: the aboleth needed spellcasters to fuel the rituals that would create gargantuan psionic obelisks that, in turn, would allow the aboleth to magnify their natural domination ability to affect entire regions. Of course, the only way to obtain the spellcasters was by organising slaving operations that would capture them. The net result was a logical progression from individual slavers to a group of slavers to a slave market and then into the Underdark before finally confronting the aboleth in their city.

This could also work in Neverwinter.

I was surprised to find this rather inspiring piece of flavour text introducing the entry for beholders in 4E's Monster Vault:

When the unwholesome plane known as the Far Realm comes into tenuous contact with reality, terrible things boil across the boundary.

Nightmares form the thunderhead of psychic storms that presage the arrival of warped beings and forces undreamt of by the maddest demon or the vilest devil. Many aberrant creatures stumble upon the world by accident, pushed in like chill wind through a door suddenly opened. Others crash into reality because it is as loathsome to them as their surreal homeland is to all sane natives of the rational planes.

Beholders, however, come as conquerors. Each one seeks to claim all in its sight, and beholders see much indeed.

What if the disaster that brought Neverwinter low also echoed across the planes - and the not-plane of the Far Realms - and, like a receding sea the precedes a tsunami, the natural disaster of the volcano preceded a most unnatural disaster: a rift in reality that allowed the Far Realm to spill into the world.

The net result? A new beholder hive, fresh arrivals to Toril, who, like the daleks of Dr Who, are here only to conquer or to exterminate.

Another option, based on the BBEG in Paizo's first adventure path The Shackled City, is to have the beholder be able to take the form of the human ruler of Neverwinter: what if Lord Neverember is actually a beholder mage in human form? 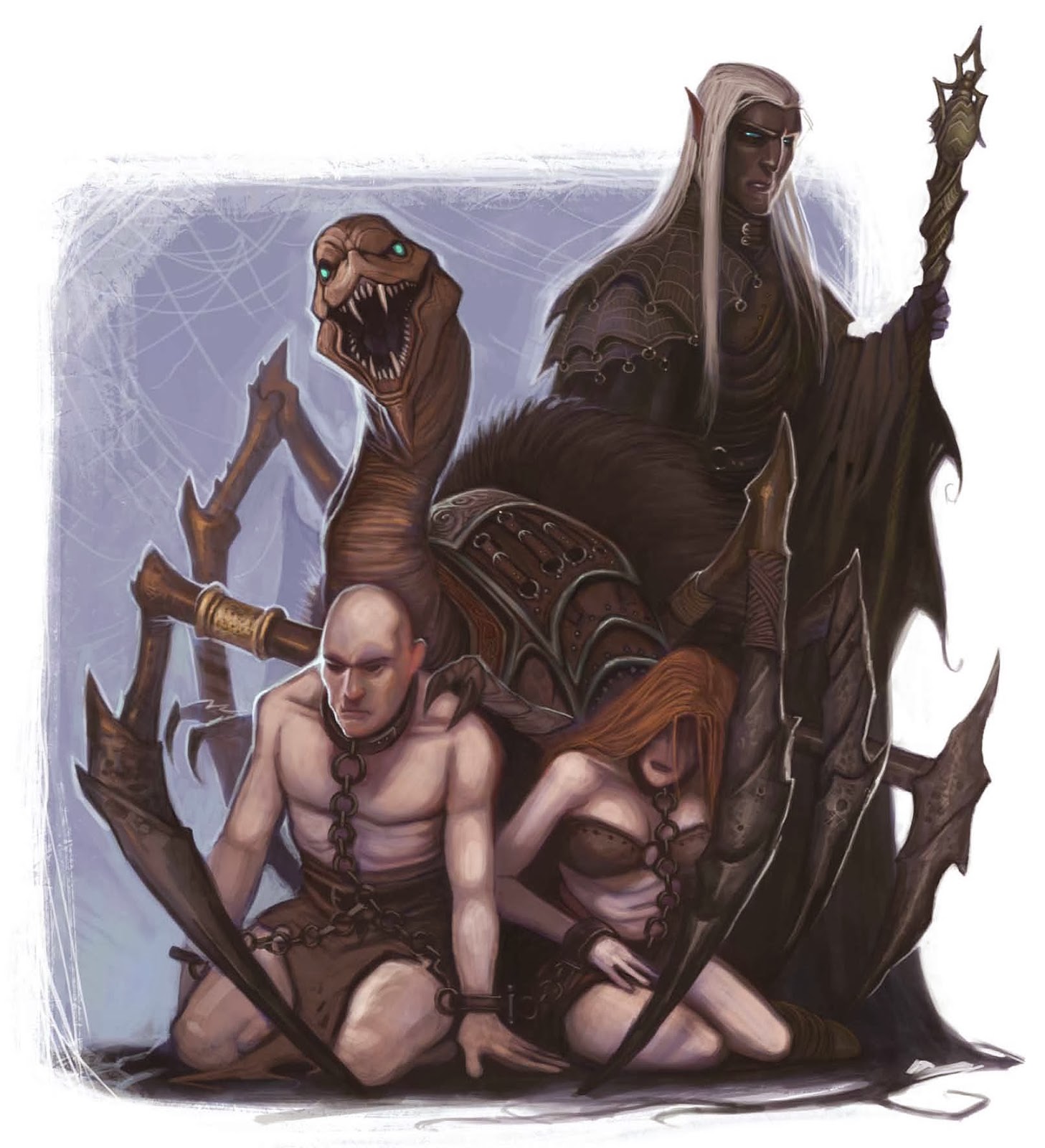 I have really liked the neogi - a strange cross between a moray eel and a spider - since they were first introduced in the boxed set Spelljammer: AD&D Adventures in Space, the first in the Spelljammer line of products which actually did what its tagline said and set AD&D adventures in space.The neogi were introduced as evil merchants and slave-traders whose only interested was in gaining wealth and owning things, particularly slaves.

Despite my fondness for them, to the best of my knowledge I have never used a neogi in adventure. Perhaps Ruins of Adventure is my chance to address that?

One of the (few) good 4E adventures published in Dungeon was Web of Chains in Dungeon 168. I think the background for this adventure could be easily adapted for use in the ruins of Neverwinter:

The Bloody Chain clan is an ancient group of neogi slavers and merchants ruled by Ghorfal the Voracious, the eldest neogi of the clan. The Bloody Chain were once voyagers across vast seas, commanding slave ships with green sails that struck terror into the hearts of all that saw them. The Bloody Chain traded with devils, drow, and evil giants, and they even aspired to build their own empire until a group of heroes struck them down. Although they burned all the green-sailed ships and left most of the Bloody Chain neogi dead, Ghorfal and a few of its servants survived.

... Through cunning trade and its considerable personal power, it has brought the Bloody Chain from the brink of extinction and turned it into a small but dangerous raiding band. Ghorfal still craves the greater wealth and influence it once commanded on its slave ships and is taking a great gamble to reclaim his lost status. Ghorfal leveraged what treasure and slaves it has left to hire enough mercenaries to aid it in building a new, permanent stronghold. Using his old contacts, he has spread the claim that he already controls a vast slave bazaar where creatures of all species can be bought and sold. Come spring, his buyers will begin to arrive, and he must finish his base of operations before then....

What if Ghorfal the Voracious has set up its lair in the ruins of Neverwinter and has loggers working the Neverwinter Wood for lumber with which to build new ships while a great Underdark bazaar at the bottom of the Chasm - which could even be based on the Seven-Pillared Hall from H2 Thunderspire Labyrinth - serves as the market for its slaves.


The other beauty of this basic set-up is that it could also work in conjunction with, say, having a beholder as the true ruler of the ruins of Neverwinter or it could be tied to the aboleth-based adaptation of Night Below previously mentioned. Further, a natural conclusion to this sort of slaving operation would be the Demon Weave-based adaptation of the legendary D series - D1 Descent into the Depths of the Earth, D2 Shrine of the Kuo-Toa, and D3 Vault of the Drow - that I seem to mention repeatedly on this blog.

Email ThisBlogThis!Share to TwitterShare to FacebookShare to Pinterest
Labels: Neverwinter, Ruins of Adventure