Silver Marches Sandbox 11 - Riding the River Rauvin, Part 2: The Dungeon of the Ruins (aka The Prison of the Firebringer)

In Part 1, the PCs found themselves in the town of Nesmé after accepting a commission to guard a barge travelling down the River Rauvin from Silverymoon and carrying weapons that Nesmé would use to fight off troll raiders from the Evermoors.

Originally a dwarven hold called Andalbruin, the site was transformed into a human village when the Selskar Order, a group of Netherese arcanists, occupied the ruins of the hold in -626 DR and set up a magic school named Selskartur (Tower of the Star in Loross). Less than forty years later, as the village looked to expanding into a realm of its own, the troll warlord Harska Thaug attempted to attack Rilithar but Selskartur was in-between the troll's forces and the elves.

Troll magic-users defended Harska's army against the arcane might of the Selskar Order and appeared to have the upper hand despite taking tremendous casualties. Ilviroon, the leader of the Selskar Order, opened a gate and summoned Bazim-Gorag whom he charged with burning the trolls to death. Bazim-Gorag did as he was commanded and drove the trolls into the Spine of the World. When Ilviroon dallied in compensating the slaad lord for his services, Bazim-Gorag turned on his summoners and killed many Selskar arcanists. Ilviroon trapped and bound Bazim-Gorag in some dwarven vaults beneath Selskartur and left him there, beginning an effort to rebuild what had been destroyed.

Harska and his trolls returned the following winter though and, still weak from the last attack, the Selskar Order was wiped out. Unfortunately, Ilviroon was the only person who knew how to release Bazim-Gorag from his binding. The slaad was trapped with no hope of rescue for nearly two thousand years.

Over that time Selskartur became known as the Dungeon of the Ruins and in 1356 DR adventurers calling themselves the Company of the Riven Orb ventured far enough into the dungeon to meet their ends at the eyes of a beholder just outside Bazim-Gorag's vault. With the path to him almost completely clear of obstructions, the slaad managed to remotely influence many evil individuals to come serve him. These individuals became a cult, calling themselves the Acolytes of the Hidden Flame, and came to inhabit the dungeon, doing all they could to enact Bazim-Gorag's will. In 1373 DR a durzagon cultist discovered a method to free his master but his plans were foiled by adventurers.

The source for this background was the Prison of the Firebringer adventure by Rich Baker and published in Dungeon 101. I am not proposing a simple conversion of Prison of the Firebringer - that adventure was designed for 3.5E characters of levels 13-15 - but the maps, background and general idea provide a really good framework around which I can easily build an adventure suitable for 4E's Heroic Tier. (And, of course, it would be even simpler to adjust it for almost any level for a 13th Age game.)

The Black Raven tribe of the Uthgardt have their primary camp west northwest of the Dungeon of the Ruins. They are notorious bandits and raiders in the area having eschewed almost any form of civilisation but holding fast to their Uthgardt traditions.

It seems that many have been sighted around the Dungeon of the Ruins and the ruler of Nesmé hires the PCs to find out why as the place has a sinister reputation.

Build It and They Will Come

The simplest hook for this adventure is for the players to see Dungeon of the Ruins on the map and simply decide to explore what's there. This actually makes a lot of sense in the context of the set-up assumed in Part 1: bored adventurers looking for something to do in or near Nesmé.

Lurkwood Loggers
The Lurkwood has an unsavoury reputation that keeps such races as eladrin, elves, and the more goodly fey from settling within its borders. However, that also means that it is a target for loggers who don't want to upset the goodly fey and their allies amongst the rulers of the Silver Marches.

With the arrival of spring, logging crews have departed Nesmé, their winter base, to log the eastern edges of the Lurkwood near the Dungeon of the Ruins. Soon enough, a lone logger appears at Nesmé's gates claiming that his fellow loggers have all been slain, have disappeared and/or have been taken as slaves by Black Raven barbarians, dark fey, frog-like humanoids (ie, bullywugs) and/or slavers. The PCs are then hired to deal with the situation and the parties involved which ends up leading them to the Dungeon of the Ruins....

Getting There: The Surbrin Way

I like this relatively simply wilderness map that is part of the Prison of the Firebringer adventure as it makes it relatively easy to turn the journey to the Dungeon of the Ruins into a mini-sandbox.

I really like the idea of a simple ambush by Black Raven Uthgardt barbarians, filling a role that might be played by orcs in other campaign. To mix it up a bit, perhaps I can have a Black Raven shaman riding a giant raven (stats for these are in 3E's Silver Marches and they would be easy enough to convert).

The encounters along the Old Selskar Road are probably going to be very similar to those in Selskar Vale which, in turn, will be determined by what is actually the primary threat at the Dungeon of the Ruins (see below).

These hills could easily hold common creatures like leucrotta, ogres, orcs, perytons, and maybe a dragon or two  (grey, red, white), all of which might decide that a party wandering along Old Selskar Road makes for good eating.

It's also likely that these hills contain other dwarven ruins and maybe a steading of hill giants which may provide inspiration for further adventures in this area.

As implied above, the Lurkwood is a dark and dangerous place. It's noted in a few sources as a place with bottomless bogs and deadly quicksand. That suggests that will-o'-wisps are likely to be plentiful which further suggests the presence of dark fey.

Perhaps those who explore the Lurkwood eventually encounter cyclops slavers working for a fomorian king whose Feywild demesne overlays this great forest and perhaps that fomorian king is also linked to the troll problem in the Evermoors.... (I'll post a link expanding this idea at some point.)

What will the PCs find in the Selskar Vale? At this point, I haven't decided what the primary threat might be but here are some initial ideas:
Actually, I could use a combination of two or more of these ideas to create factions at the site which might make the dungeon that much more interesting. I think with further development, it could end up with more of a T1-4 Temple of Elemental Evil feel to it, which would be a great excuse to use this wonderful piece of art: 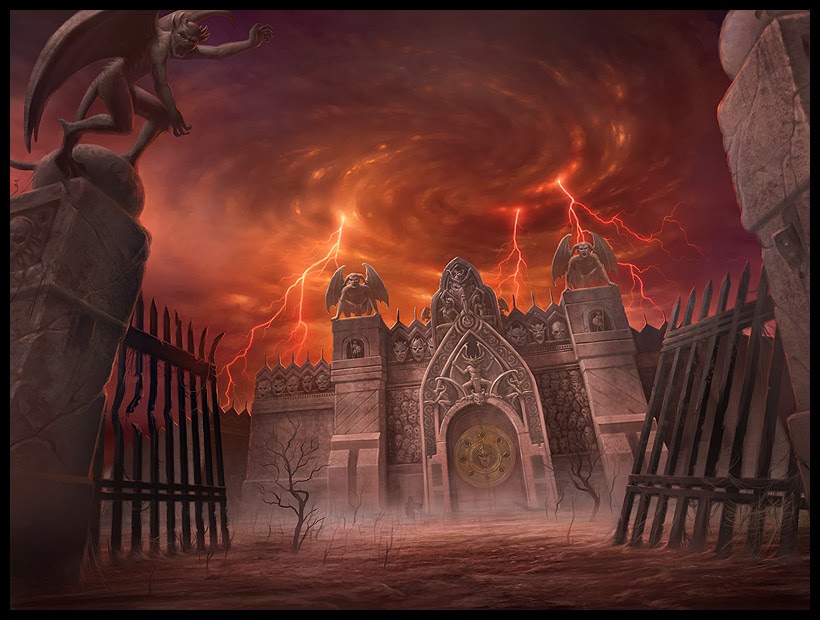 Maybe the Dungeon of the Ruins is not so ruined after all?

Finally, we get to the dungeon itself.

I think the most important point is this: even if the PCs are only level 1 and the rest of the adventure suits beginning characters, if the PCs explore far enough, they will encounter the imprisoned aspect of Bazim-Gorag even though he is probably something like a level 12 elite soldier (which has the same XP value as a level 7 solo soldier: this is another option if the PCs come back after a few levels).

The dungeon should feel like it was built by dwarves - and that means that there might be some stonework traps in less-travelled areas - but also have a theme of elemental fire and chaos. And the final encounter should involve the PCs coming across a ritual to free Bazim-Gorag which they must stop else they will have to fight the Firebringer themselves....

Anyway, with this rough outline plus the Dungeon 101 adventure Prison of the Firebringer, I think most DMs could nut something out fairly quickly on the fly for use in a sandbox campaign set in the Silver Marches.