The Forgotten Temple can be viewed as being divided into three sections. There is a wilderness section rather similar to the wilderness section of Lost Caverns, there is an aboveground surface temple and then there are several dungeon levels below ground.

As I would probably set this very close to Lost Caverns, I would simply use the same ideas for wilderness encounters as per the Lost Caverns post. However, there is a rather usable old school blue map of an orc lair that it would be a shame to waste. It would be easy enough to incorporate with minimal conversion work.

In the original adventure, the aboveground temple was the demesne of a mountain giant - Groorg the Cunning in this case - which had, in 1E, a weird power to summon evil humanoid creatures to itself and those humanoids would then willingly serve the giant. (It never was explained how or why this happened and it's something I have no intention of incorporating. I'm fairly sure this was yet another piece of random design from 1E's Fiend Folio.) This led to a situation where entering the temple required the PCs to fight their way through several waves of humanoids with each wave increasing the hit dice of the creatures involved. (Yes, that's 1E Gygaxian story logic at work. :) )

I don't want to use a mountain giant and I am thinking that this adventure works best if I ignore my preference for a plot-free sandbox and actually parcel out a few dollops of plot and/or metaplot: the Netherese are here and their forces are led by a death giant. Hopefully I can use this picture even if it means changing the description (and map) of the temple quite significantly: 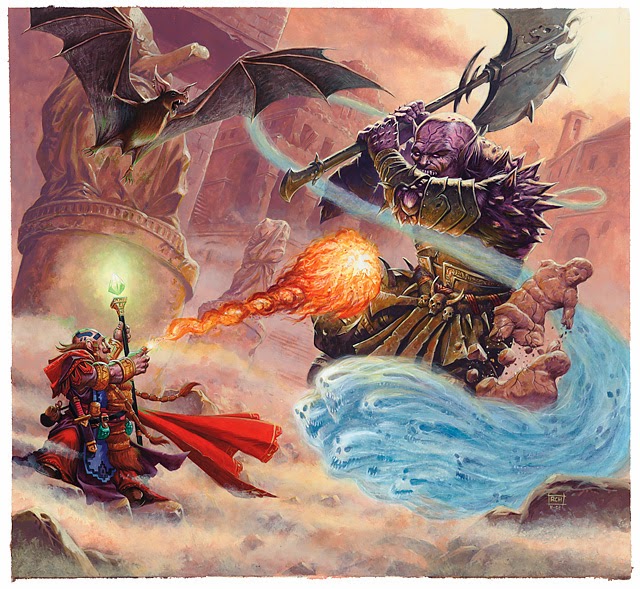 The Netherese forces can be a mixture of shadar-kai, krinth (a shadow demon-spawned slave race), and Netherese humans. And while they're guarding the temple above, an elite band of Netherese are trying to puzzle out the mysteries of the dungeon below.

I'm also thinking that the temple itself is actually a temple of Shar built during the pre-Karsus time of Netheril when it was at its height. The temple of Shar, though, is significantly younger than the dungeons beneath for reasons that will shortly become clear.

Notwithstanding the different monster roster, I would like to preserve the mass battle feel of the original adventure. Fortunately, minions make that really easy in 4E, as mooks do in 13th Age, and hopefully the experience will leave the players feel like their characters are badasses....


There is no point trying to incorporate a conversion of, adaptation of or even an adventure inspired by WG4 The Forgotten Temple of Tharizdun without actually embracing the weirdness including the  strange altars, mysterious robes, torches and incense, the whole lot. And that's definitely my plan.

The fundamental difference is that I don't want to include Tharizdun as I see him/it as belonging to Greyhawk and the world of Oerth although WotC allowed him/it to cross worlds for their (incredibly half-assed) Abyssal Plague plotline.

Instead of the creature trapped in the Black Cyst being Tharizdun, in this case the creature is actually a shadevari, an ancient creature of shadow said to predate the creation of Toril. The Netherese are devout (even fanatical) Shar-worshippers who are trying to free the shadevari believing it to be part of the key to achieve Shar's primary goal: utter nihilism with the world and its galaxy reduced to utter nothingness.

I am thinking of keeping the Tharizdun name, or at least the original name coined by Rob Kuntz before it was appropriated by Gary Gygax. That name was the very similar Tharzduun although an interview with Rob Kuntz also included a superfluous apostrophe - Tharzdu'un - which, in this case, may actually make sense.

So the PCs follow in the footsteps of the Netherese Sharrans and the shadevari may or may not be freed... but hopefully it will all be weird in a good and memorable way.