My Realms - What's Next? Part Three

In the first of these "What's Next?" posts, I mentioned my desire to run what is to me the classic FR campaign: Zhents, drow, beholders and mass combat in Shadowdale. In other words, a complete rip-off of stuff written by Ed Greenwood... but with no nudity. ;)

I'm calling that campaign Land Under Shadow and, besides Ed's obvious influences, it also grew out of an earlier idea I had for a campaign called Blades for Daggerdale, inspired by the rather good LFR adventure of the same name. I had posted my ideas for Blades for Daggerdale, and even started a campaign-specific blog, but I deleted all of that some months ago as I wasn't expecting that I would be able to run that campaign.

As much as I love the ideas for Land Under Shadow, it's a fairly complicated campaign so I've been thinking about Blades for Daggerdale again because I think it would be an easier campaign to run and, more importantly, a campaign that new players would find easier to play.

(I still have this idea of running a group of new players through a 4E campaign here in the Philippines. I may be crazy but I still have hope it can be done!)

The latest version of this idea is now called...

The name Reavers of Daggerdale alludes to the fact that his campaign, while drawing on the LFR adventure Blades for Daggerdale, is a complete rip-off of the 4E adventure Reavers of Harkenwold which came with the DM's Kit for 4E Essentials. Instead of the Iron Ring, though, the titular reavers will be the Zhentarim.

The backstory of Land Under Shadow applies here: Manshoon is back and is establishing control over the trade routes leading to the ruins of Zhentil Keep which is now in the process of being rebuilt.

Other than that, the new Lord of Daggerdale is a Zhentarim stooge and Daggerdale itself is afflicted by gnoll raiders, werewolves and, of course, the Zhentarim.

I'm tossing up whether to have the Zhentarim leader as a Black Cloak wizard in the Mines of Tethyamar (and this Black Cloak may even be a lesser clone of Manshoon - more on "lesser clones" in another post) or a beholder who operates out of the Temple in the Sky above the Burning Tower on the boundary of the Border Forest.

In 2003-4 I ran two FR campaigns over a 12-month period with two different groups with no overlap in the players. Each campaign was set in a different part of the Realms - the Silver Marches (aka Luruar) and the Dalelands - but both campaigns involved the same plot by Shar involving the Shadow Weave and some other very unimaginative ideas (I admit that I rarely ever have an original idea involving D&D so anything you read of mine is almost always based on someone else's work).

The two groups were approaching the same endpoint from slightly different perspectives and I was only two sessions away from being able to join the two groups together for one final session that would have involved both groups playing through the same conclusion to their respective campaigns.

Unfortunately, real life issues played havoc with both groups so I wasn't able to bring these campaigns to this planned joined conclusion but it remains on my gaming bucket list to run two (or more?) parallel campaigns with different groups and then conclude the campaigns by bringing both groups together to share the same conclusion.

I think Reavers of Daggerdale and Land Under Shadow have this sort of potential because of my idea for the...

The Many Clones of Manshoon 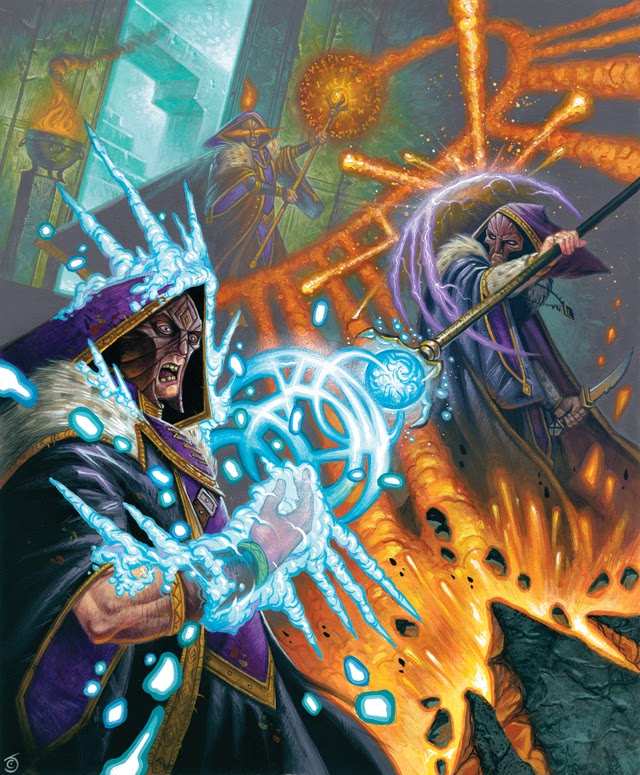 My plan for the backstory of both Land Under Shadow and Reavers of Daggerdale involves the Xraunrarr hive of beholders awakening an early clone of Manshoon from when he was younger, less powerful and yet to master the stasis clone spell (or ritual) that later became his signature magic.

My theory is that this Manshoon dates back to around 1355 DR when he was around level 15. I am thinking he used - or maybe a beholder mage - used a variation of the 1E spell simulacrum that products a lesser clone with only about 75% of the power of the "clonee" (if there is such a word). This means that the beholders have awakened a Manshoon who is only about level 12 and realises that his personal power is significantly less than what it was.

One of his first goals once he realises how weak he is is to seek out a new source of cloning magic. My idea, based on a 3.5E-era Dragon article The Ecology of the Spellweaver, is that he knows of the location of an old spellweaver ruin beneath the Glacier of Silver Swords in the Dragonspine Mountains north of Phlan (and not far from the former Zhent fortress, the Citadel of the Raven).

There he finds the means to begin cloning himself anew but he also uses the spellweaver magic to make a major change that he has never before attempted: he is able to create lesser clones of himself that can co-exist with his primary self and whose senses he can share when he so desires.

This allows him to personally oversee several concurrent plans at once aimed at rebuilding the Zhentarim while his primary self remains safely ensconced within one of his many safeholds. It also means that he can be encountered repeatedly during the course of the campaign - or even in parallel campaigns - and will hopefully make his final defeat that much sweeter for the PCs.

As implied, if I do run two or more Manshoon-themed campaigns, they will involve many clones of Manshoon but the final adventure where the two (or more) groups are joined together will involve a showdown with the primary Manshoon... and, quite likely, a hive of beholders.

Of course, I still don't know whether or not I will ever get a chance to run with this idea, but I think it's worth posting just in case someone else can get some use out of it.