I find that B2 Keep on the Borderlands, particularly the main adventuring site, the Caves of Chaos, seems to try and sneak its way into every campaign that I write. There's something about a valley filled with evil humanoid tribes that are both allied and at odds with one another that seems to be so eminently portable and, of course, game-able.

Considering how much of the real estate, as it were, of the Silver Marches is covered in hills and mountains, and also how many tribes of orcs and other humanoids are identified in 3E's Silver Marches, placing the Caves of Chaos is a really simple endeavour. What is more of a challenge, however, is finding a suitable location for the titular keep.

Mike Schley's outstanding map of the Silver Marches is really large and my plans for this campaign involve narrowing my focus to a 100 mile radius circle centred on Silverymoon. You can see some of that - and a lot more - on the following extract from the main map:

Some 60 miles east northeast of Silverymoon is Hawks's Nest, a location that is barely detailed in FR Realmslore. All that I can find boils down to it being a small watchtower at the top of Silverymoon Pass from where a dozen or so Knights in Silver protect the pass during the months when it is used by travellers.
However, that description dates back a century or so as it comes from 3E's Silver Marches. I think the idea that Hawk's Nest has been expanded into a larger keep from where scouts are sent out to monitor the Ripped Gut and other orc tribes to ensure that they're not whelming into a horde that could threaten Silverymoon makes a lot of sense. And, who knows?, perhaps other more secret threats from, say, the Underdark have arisen in the years since the Spellplague necessitating an expanded presence of Silverymoon's defenders at this key point in the Silverymoon Pass.

So that's the titular keep taken care of from a background perspective. Now for the Caves of Chaos: 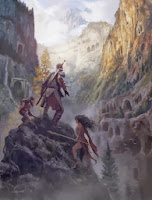 This picture is from a WotC book (I think 3.5E's Dungeonmaster's Guide II) and is supposed to depict the Caves of Chaos from B2 Keep on the Borderlands... but it doesn't really match the map in that adventure. Nevertheless, it's an interesting take on the Caves of Chaos and one that could inspire a rather interesting adaptation.

The original Caves of Chaos included multiple humanoid tribes - from memory: gnolls, goblins, hobgoblins, kobolds and orcs plus a solo ogre and a solo minotaur - with no hint as to how they might successfully co-exist in such proximity to each other. The closest we have to a hint is the presence of mysterious shrine of or to "evil chaos" and that's something I would like to give some thought to because I think the Caves of Chaos work best when you first decide what has caused such disparate races to co-exist relatively peacefully.

In my previous post, I posited the presence of a group of Netherese in a dungeon adapted from the one in the B1 In Search of the Unknown adventure and I am going to again run with this idea at the risk of creating a plot for this campaign rather than a simple sandbox.

And here's the basic idea: what if the Netherese are using some relic of evil - some of the 1E artefacts such as the Regalia of Evil might provide inspiration - to draw these evil humanoids to this location where they are brainwashing them and training them for a mass assault on Silverymoon when the time is right.

The shrine of "evil chaos" instead becomes a temple of Shar presided over by a shadar-kai invoker of the Mistress of the Night. The keep of Hawk's Nest also plays host to a secret trio of Sharran assassins, actually sorcerer/monks from the order of Dark Moon monks, who may be used by the Netherese to punish those PCs who strike against the Caves of Chaos then think they are safe when they return to the keep at Hawk's Nest (and generally they are but, at some point, even new players need to learn to be scared of assassins in the night).

Another option involves focussing solely on orcs but arranging them by tribes. In such a case, these orcs include outcasts from Many-Arrows who are frustrated with the trappings of civilisation that now surround the orcs of that kingdom. These outcasts believe that this is not the orc way and they have gathered here in the Nether Mountains to build their strength until the point where they can wash away civilisation's stain.

The shrine of "evil chaos" thus becomes a shrine or temple of Gruumsh. And just as Gruumsh replaced Talos, Talos also replaced an earlier deity, Kozah, as the Storm Lord. I rather like the idea that this temple of Gruumsh was once a temple of Kozah known as the High Altar of Storms (and that's a nod to Warcraft II). Perhaps the orcs can perform ritual sacrifices here that allow them to call down destructive storms in the Silverymoon Pass providing both an additional adventure hook and an extra challenge to overcome.

I'm avoiding a Zhentarim connection but it does remain an option: the whole plan could be a Zhentarim operation and the temple could be devoted to either Cyric or Bane. I've used that idea so many times that I don't really want to use it again (plus I find that using Zhentarim tends to get me building more a plot-based campaign which is not what this campaign is meant to be) unless I somehow feel that it would be the best possible idea based on the players and the choices they have made.

Ideally, I would like to run this as the second adventure in the campaign - with In Search of the Unknown being the first - which suggests that at least one of the hooks could involve uncovering a Netherese plot following clues the PCs uncover in the first adventure and assuming that the shrine of "evil chaos" is now a temple of Shar. However, I really would prefer to avoid any hint of a plot except that which develops organically.

I rather like the idea of the PCs, following the success of their first adventure, being hired by the Knights in Silver to travel to Hawk's Nest and determine if there is a link between a series of unnatural storms afflicting Silverymoon Pass and mass movements of orcs from tribes that normally fight on sight but yet seem to travelling together. This is based on the idea that the shrine of "evil chaos" is now a temple of Gruumsh-who-was-Talos-who-was-Kozah.

Finally, if the Zhentarim are involved then the humanoids will definitely be raiding merchants travelling on the Silverymoon Pass (except for those who pay for Zhent protection). This option suggests that the adventure hook could come from the Knights in Silver seeking to remove the threat posed by the orc et al bandits or from a group of merchants concerned about their losses. It also suggests the possibility of some intrigue and adventure within Silverymoon as the PCs seek to first unravel a Zhentarim conspiracy before heading to Hawk's Nest for a more traditional adventure.

I think the sandbox is taking shape.
Posted by Scrivener of Doom at 13:37