Legacy of the Crystal Shard + B2 Keep on the Borderlands 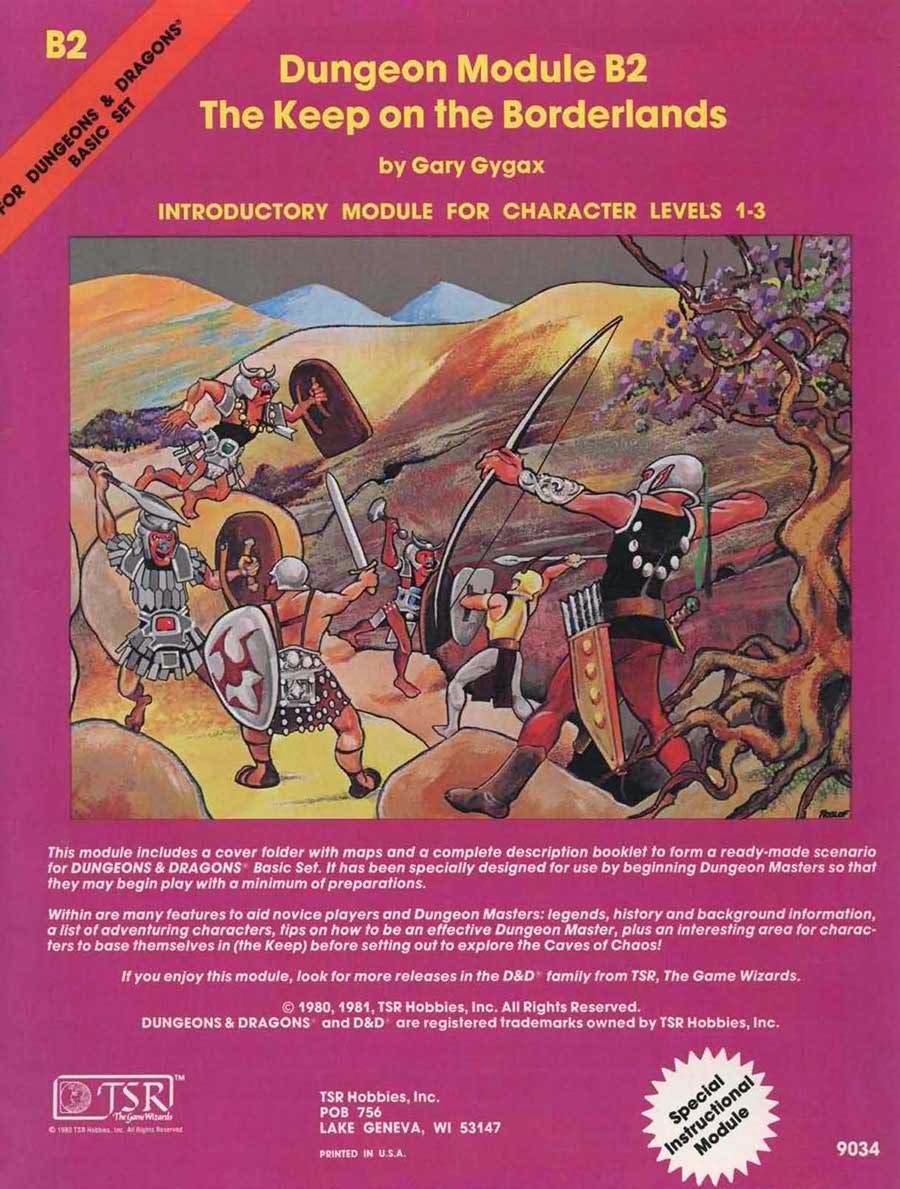 I think most gamers of a certain vintage have a soft spot for B2 Keep on the Borderlands. (This is linked to DNDClassics.com.)

For many of us, it was the first adventure we bought, ran and/or played in and probably more than once. One of the things that stands out about it is that the basic set-up is surprisingly flexible and can be easily adjusted to serve whatever plot a DM might come up with.

Leaving aside the titular keep and its inhabitants - these aren't really relevant in terms of using this adventure as an expansion to Legacy of the Crystal Shard - and focussing on the Caves of Chaos, what we have is a location that, on the face of it, doesn't really make sense, but with a bit of backstory can actually work really well.

The basic conceit is this: the Caves of Chaos are a networks of "dungeons" inhabited by competing races or, in a few cases, competing tribes of the same race. Having these natural enemies so close together doesn't seem to make sense... until you realise that there is also a mysterious temple of Chaos hidden away deep in the network of caves.

That temple of Chaos and the power it represents was never explained away by the adventure's author and it's the nature of this temple that I want to expand upon in this post suggesting how the Caves of Chaos can be used to expand Legacy of the Crystal Shard.

For the sake of this post, I am simply going to assume that you want to use the Caves of Chaos more or less "as is" in or near Icewind Dale. However, as the DM you are wondering why these creatures that should be at odds seem to be able to dwell in close proximity to each other and my answer to that lies in the mysterious temple.

So here are my suggestions as to what this temple could be about.

In many ways, this is the easiest option as it immediately ties into the extant plot of Legacy.I can imagine Auril gathering outcasts of the various humanoids tribes to herself, promising to protect them from the cold and an unnatural winter that may be coming.

It would also be interesting to have the principal altar of the temple constructed out of black ice.

What if a Chosen of Bane has arisen from among the hobgoblins of the North? And what if he received a vision from the Black Lord bringing him to an ancient temple of Bane hidden deep in a network of caverns? What we would then have is something like the beginning of 3.5E's Red Hand of Doom where a great goblin horde prepared to descend on the Ten Towns.

Yes, this would expand Legacy rather nicely into a mash-up of Legacy, Keep on the Borderlands and Red Hand of Doom.

One of the changes to the deities instituted for 4E was that Cyric was imprisoned for his murder of Mystra etc.... Let's assume that his place of imprisonment is somewhere deep in the heart of the Elemental Chaos and/or the Abyss and close to the Shard of Evil. Let's further assume that this means that the key to his freedom is somehow unravelling the elements that are bound together to make the world of Toril.

This means at least two things:

1. We're looking at a similar backstory to how Tharizdun could released in 3E's Return to the Temple of Elemental Evil.
2. Cyric's interests now coincide with those of the primordials who also want to undo the bound elements.

Auril's actions in Icewind Dale are slightly destabilising the balance between the elements. This is something that Cyric is able to sense and to tap into and so he has guided a Zhentarim strifeleader and a Zhentarim band of Cyricists to a mysterious stone altar in the Caves of Chaos. This altar is of some forgotten primordial and can act at the focus for elemental evil - yes, now I am introducing ideas from T1-4 Temple of Elemental Evil - and sends out something of a siren call to those of an evil nature, hence the gathering of the humanoid tribes.

So the Dalesfolk are not only experiencing the bitter and perhaps unnatural winter thanks to Auril, but earth tremors are shaking the region causing near-tsunamis to form on Maer Dualdon, Lac Dinneshere and Redwaters. Even steam can be seen exiting new vents on the sides of Kelvin's Cairn.

And all of this is caused by rituals performed by the Cyricists, and these rituals require sacrifices. Zhent slavers are operating in Icewind Dale and the PCs are hired to end this threat ultimately bringing them to the Caves of Chaos and a confrontation in a mysterious ancient temple.

With 4E it was revealed that Talos was actually an aspect of Gruumsh and so the two were merged into a single deity. One of the side-effects of that was that Talos's portfolio of storms seem to disappear before awkwardly appearing as one of Auril's domains.

What if Gruumsh-who-was-Talos wants the portfolio of storm back? 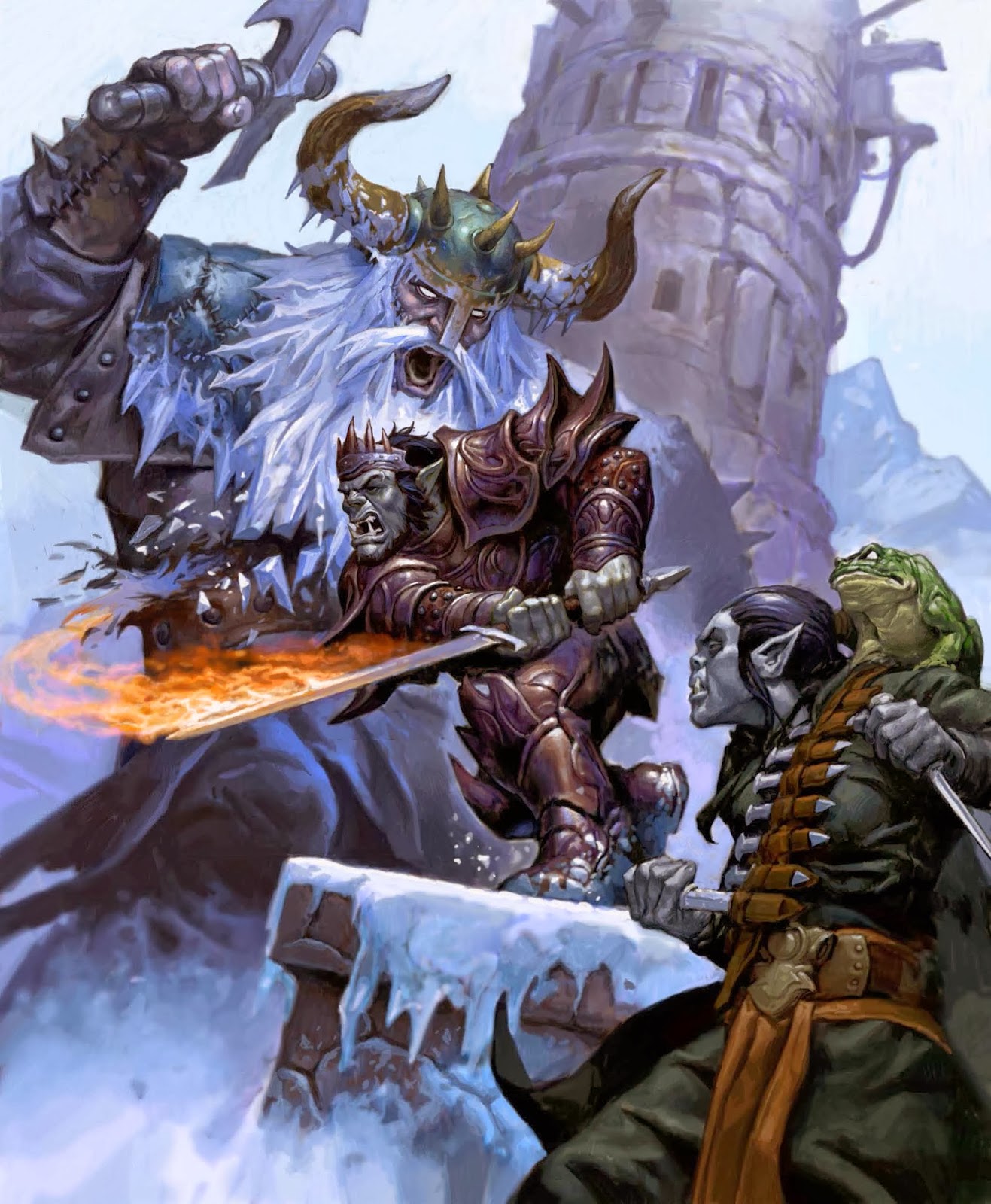 The R A Salvatore-authored article History Check: Dark Arrow Keep in Dragon 429 reveals, unsurprisingly, that there is a faction within the orcs of Many Arrows who do not want peace with their neighbours and the trappings of civilisation but instead want to return to the more traditional orc ways.

What if it is this faction that has found these Caves of Chaos and the mysterious ancient temple of Kozah, an earlier identity of Talos? They are here to clash with the forces of Auril... but they also have reverted to the normal orc ways of raiding and reaving and that's what brings them to the attention of the PCs.

I don't think that having the goblinoid races in the Caves of Chaos would make sense in this case but I could imagine ettins, ogres, ogrillons and trolls and perhaps a mysterious group of minotaur priests of Kozah (if I explore that idea further, I will end up involving the Caverns of Thracia as part of a grand mash-up).

What would be interesting would be having the PCs defeat or otherwise deal with these orcs and then have to ask King Obould for assistance with a frost giant threat - per the illustration above - simple because Ten Towns is not powerful enough to deal with the giants on their own. Perhaps Obould agrees because the PCs have brought the orc renegade mention in the Dragon article to Obould for justice and so earn his respect and a reward, which coincidentally helps to satisfy the war-like impulses of his people.

The Rise of the Underdark/Demon Weave storyline that was played out through a few seasons of D&D Encounters could also be kicked off in Icewind Dale beginning with the Caves of Chaos.

In this case, the secret temple is a temple of Lolth and a drow priestess is gathering humanoids together to raid for slaves and also magic items, both to be sacrificed in Menzoberranzan for the creation of the Demon Weave.

This could even lead to an expanded version of the D&D Encounters season War of Everlasting Darkness which could also be mashed-up with D1 Descent into the Depths of the Earth, D2 Shrine of the Kuo-toa and D3 Vault of the Drow (with Menzoberranzan otherwise replacing Erelhei-Cinlu). That might not work for a lot of 4E DMs because drow etc... are such high level, but it would be OK for me as I reduce everything to match hit dice or levels in 1E so that I can focus my games on the Heroic Tier (and maybe early Paragon Tier).

Email ThisBlogThis!Share to TwitterShare to FacebookShare to Pinterest
Labels: Legacy of the Crystal Shard