Silver Marches Sandbox 2 - In Search of the Unknown

Silver Marches Sandbox didn't quite have the right ring to it for the name of this campaign, particularly as I am planning to pitch it to my wife's family who have no idea what a sandbox is (I don't think they've even heard of a children's sandpit either so explaining a sandbox to them really would be starting from scratch).

B1 In Search of the Unknown is very old school in that it is essentially a location with a bit of a fairly generic backstory but it suffers from a map that makes absolutely no logical sense. That said, it might provide the perfect framework for an introductory dungeon adventure in this campaign. As the Nether Mountains are noted as holding caches of ancient Netherese magic, it makes perfect sense for a dungeon like this to be a legacy of lost Netheril. I do like the mix of the dungeon rooms on one level and the more natural caverns on the other, plus the arcane weirdness of the Room of Pools is something that I think is almost mandatory in anyone's first adventure.

Assuming I do run it, or something very similar to it, I would probably update the maps. The original map looks like it was created using a random dungeon generator but at least one fan on the internet has posted a cleaned-up/neater/more logical version of the same. I would probably use the latter and otherwise make sure I keep all the "weirdness" which includes:

a) several one-way secret doors;
b) illusions and magic mouths;
c) a wind corridor which may extinguish torches and open flames;
d) the aforementioned room of mysterious pools;
e) a room of doors;
f) a water pit trap which suddenly drops adventurers to the lower level;
g) a portcullis trap where vertical bars drop behind the party in a dead end corridor;
h) a pair of teleport rooms to confuse explorers;
i) several magical treasures - most beneficial, some cursed; and
j) mysterious containers with a variety of contents for examination.

Frankly, the hardest part is coming up with a list of monsters and NPCs to include. As an ancient Netherese site it probably makes sense for there to be some modern Netherese exploring the dungeon - a good excuse to use shadar-kai - and these Netherese probably have some orcs for guards. That, of course, then gives me the perfect excuse to use a rather good piece of art that I haven't been able to use yet: 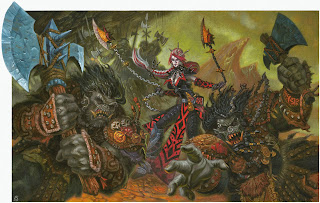 However, shadar-kai and orcs aren't quite enough. And while I am trying to avoid a lot of story or plot in this campaign, I rather like the idea that the dungeon is a battleground for two different factions. So, if I have the Netherese on the upper level searching for a cache of magic from ancient Netheril, perhaps I can also have drow on the lower level searching for the same cache of magic as fuel for the Demon Weave that is Lolth's planned ascension to the vacant position of deity of magic.

I'm thinking that, as already mentioned, the Netherese shadar-kai will be served by orc mercenaries while the drow will be served by troglodytes who will have a bugbear overseer (an arrangement inspired by the original Drow series). For dungeon "weirdness" I am thinking that monsters such carrion crawlers, fire beetles, some sort of golem-like construct, green slime, grey ooze, mimic, ochre jelly and a water weird might be a good list to play with. Outside the dungeon, my encounter ideas include:
All of these monsters appear in the first Monster Manual. The only thing that is really missing is a dragon but I think that's probably best saved for later. Anyway, there seems to be enough material here to put together an introductory adventure based on B1 In Search of the Unknown located in the foothills of the Nether Mountains not far from Silverymoon. However, what about adventure hooks? Here are some simple - and admittedly clichéd - possibilities:
I must admit, if the campaign does develop into something with a plot, I am expecting to use the Netherese to fill the role of BBEGs. Having them stirring up the orcs seems to be a nice hook to close out the Heroic Tier and enter into Paragon but exploring that idea is a long way off.
Posted by Scrivener of Doom at 11:04

Email ThisBlogThis!Share to TwitterShare to FacebookShare to Pinterest
Labels: In Search of the Unknown, Netherese, Sandbox, Silver Marches