When the Sun is Black, DM's Guide


Ever since I first read about the second sun above Elturgard, I have been imagining scenarios that would allow the Companion, as it is known, to be darkened turning Elturgard from a land of eternal day to a land of eternal night. Many factions would desire this and this campaign is designed to explore what would happen if various factions - the Cyricist Zhents, the Banite Zhents and the Netherese - made this event their goal.


The campaign is also supposed to be about yet another civil war within the the Zhents of Darkhold involving the Cyricists against the Banites. This time, however, the Banites are being manipulated by another faction - beholders. A beholder hive with long-time ties to the Zhents. The hive wants to return to the "good old days" when the Zhents would provide them with prisoners and magic to satisfy their various appetites.

As the Companion was a product of Epic magic, its corruption would also unleash a lot of power. My first thought is that the moment when the Companion is corrupted - assuming this is performed by the Banite faction - would result in the summoning of a (level-appropriate) aspect of Bane.


Similarly, if the corruption of the Companion is performed by the Cyricists, I could see it being transformed into a colossal unholy symbol of Cyric that lashes out with purple fire against the Dark Sun's enemies. As for the Netherese, if the corrupt the Companion something like a huge nightshade might be summoned (and I am sure I have the miniature for this, just as I also have the miniature for the aspect of Bane).


Of course, the corruption of the Companion is something that might occur as the party advance from Heroic to Paragon Tier (with the balance of the campaign then based around reversing the corruption). I rather like using gnolls from the Reaching Woods, werewolves from the Werewoods, corrupt paladins of Torm and a multitude of Zhents until this point is reached.

For a long time, this phrase was simply a Zhentarim recognition phrase - indeed, it still is - but it hints at something of far greater import for the Zhentarim and also for the Heartlands, Elturgard most of all.

Gnolls of the Reaching Woods 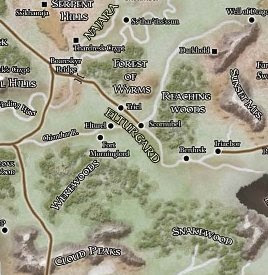 Each act will involve five separate adventures with each adventure, ideally, covering one level.


I want to use a good mix of encounter levels in each adventure, with a particular emphasis on the use of a lot of lower level encounters. Typically my campaigns have involved level-appropriate encounters; in this campaign I want to use a lot more "walkover" encounters so that the players feel like their characters are "big shots" and also so that some encounters take only 10-15 minutes to play out (as 4E encounters can go for a very loooooooooooooooooong time).


Of course, if the players don't like this it will be easy enough to change the encounter mix on the fly (one of the many strenghts of 4E).


I'm hoping that the three acts I have outlined will feel something like the virtual three acts of Star Wars, Empire Strikes Back and the Return of the Jedi.

Act One: The Coming of Strife
Levels 1-6

The adventures in Act One need to show the Cyricist-led Zhents bringing chaos and strife to Elturgard and surrounds.


Typically, they do this my sponsoring bandits etc.... In this particular case, I will have Zhents stirring up the gnolls of the Reaching Woods and the defeat of the gnolls will provide both a natural conclusion to Act One but also act as a catalyst for the Banite takeover of Darkhold in Act Two.


Ideally, the first adventure should involve an old ruined temple of Bane where the party proceed to accidentally free the banelich who causes the Companion to be darkened at the end of Act Two. Perhaps that will help inculcate a sense of responsibility when that event happens.


(In a parallel to Star Wars, Act One sees the party strike a solid blow against the Zhents of Darkhold. When the PCs reach 6th-level they should feel like they have really achieved something [and that something may be the defeat of a lesser aspect of Yeenoghu summoned by the Zhents].)

The Cyricists in Darkhold have failed (see Act One) so the Tolak of Darkhold, Lady (placeholder), has allowed a Banite cabal to take charge. It seems that while the Cyricists were manipulating the gnolls of the Reaching Woods, the Banites were organising the goblins, bugbears and hobgoblins of the Reaching Woods and the mountains around Darkhold in order to reconstitute the Red Hand of Doom. And now it is ready to march on Elturgard.


Act Two will largely be a rip-off of the excellent 3.5E adventure The Red Hand of Doom but will conclude with a grand melee in Elturel beneath the Companion. The High Observer (or perhaps even the party) will perform a ritual to lower the Companion to the ground so it can smite the armies of the Red Hand (actually Bane's talon rendered in blood) but, in doing so, he allows a cleric of Bane/banelich-possessed cleric of Bane to touch the Companion with an artefact of darkness and snuff out, as it were, the Companion's light. Instead of shedding sunlight, now it sheds darkness and Elturgard becomes the land of eternal night.


Furthermore, the corruption of the Companion allows the banelich possessing the cleric of Bane to break free and the first thing he does is summon a lesser aspect of Bane from his own lifeforce (although, when the aspect is bloodied, the banelich returns, albeit bloodied).


(Looking at Act Two as something like Empire Strikes Back, the players should feel like the Zhents are back in the ascendancy and that their victory in Act One was not only short-lived but may have laid the foundation for something worse because now the Zhents are controlled once again by Banites and beholders.)

The party may have defeated the lesser aspect of Bane but Elturgard is now a land of eternal night and the Black Age of Bane has begun. Over the course of Act Three, they discover that the Chalice of Amaunator can be used to create a magical substance known as liquid sun, and this can remove the corruption from the Companion.


The party may even have to travel to Spellgard to consult Lady Saharel to find this out (which would require an extensive rewrite of Sceptre Tower of Spellgard to make it suitable for Paragon-level adventurers).


Alternatively, they may be able to find this out by solving the mystery of Fort Morninglord.


(My initial thoughts are that the Epic-level cleric of Amaunator, Daelegoth, who created the Companion fell to some of the darker impulses common to the Netherese-era Amaunatori and started to see Amaunator as a replacement for Bane in relation to the divine portfolio of tyranny. In due course, this cleric was overthrown and sealed beneath Fort Morninglord. The Amaunatori were so ashamed of the evil that he had wrought in Amaunator's name that they ceded the nation of Elturgard and control of the Companion to followers of Torm thinking that they would make better stewards of the land. However, the same darkness that corrupted Daelegoth has also created the Eye of Justice sect within the church of Torm.)


This idea comes from 3.5E's Anauroch: Empire of Shade and the adventures will be inspired by, if not plagiarised completely, that book. Basically the party will head to the ruins of the Netherese city of Synod within the Stonelands north of Cormyr and fight their way through shades and other servants of Netheril.


The final battle should be with Lady (placeholder), the Tolak of Darkhold, who is revealed to be a beholder mage named Ixathinon.


(Returning to the parallels with the Star Wars series, the end of Act Three is much like Return of the Jedi because not only do we see the Companion shedding light again, the corruption within the church of Torm has been largely removed as many of the corrupt clerics died with the corruption of the Companion and the uncovering of the mysteries of Fort Morninglord have shown the truth of what happened.)

At this point, the PCs should be 16th-level. The players are probably attached to their characters and may want to take them further. There are a few options consistent with the story of the campaign up until this point:


1. The recovery of the Chalice of Amaunator may have brought the very unwelcome attentions of the Empire of Netheril. Perhaps the players will want to send their characters back into the proverbial heart of darkness?


2. The PCs have struck a mighty blow against the Zhentarim but the leader of the Zhentarim, Manshoon, still remains. What would it take to bring him down?


3A. I still like the idea of having Graz'zt working in the background. The Dark Prince wishes to supplant the Black Lord as the deity of tyranny, although I still feel this campaign theme is better explored in the context of my plans for a campaign set in the Moonshae Isles (cf Heretics of the Harlot's Coin) but I could always change my mind. (I will go back and edit in some Graz'zt-flavoured encounters to prepare for this eventuality).


3B. What if the darkness that tempted both Daelegoth and the Eye of Justice was in fact Graz'zt as part of his plan to take over the portfolio of tyranny?