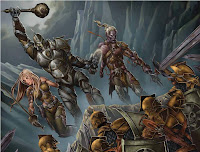 The Merchant’s Guild in Elturgard seeks to bring prosperity to the region. They desire free trade and freedom of choice.

The Merchant's Guild supports a separate organisation of adventurers to deal with local problems this group is known as the Lion’s Den.

"The Den" is composed of mostly well meaning adventurers – though some prefer to call them mercenaries.

While the guild has means to bring prosperity to the region, some feel that only money motivates the guild.

People of many different faiths in Elturgard support the Lion's Den. Most of these are good-aligned faiths, including the faiths of Sune, Tymora, and of course Waukeen.
Posted by Scrivener of Doom at 10:25