I have never really run a traditional drow-based campaign. In 3E and 3.5E drow were involved; the former as servants of the aboleth, the latter as followers of Shar. But I have never run a traditional drow-with-spiders-and-serving-Lolth campaign and clearly I am itching to do so. Of course, some of the things I have read about WotC's Rise of the Underdark series may be contributing but I like to think it is because I keep thinking that I want to run 1E's D1 Descent into the Depths of the Earth, D2 Shrine of the Kuo-toa and D3 Vault of the Drow at some point before I give up on D&D.

The main idea for this campaign outline is based on this question,  "What if the Lolth-worshipping drow of Sshamath decided to corrupt Elturgard's second sun to be a thing of darkness and thus create a surface nation suitable for drow habitation?"

Of course, this makes it a variation on both my When the Sun is Black and Doom of Daggerdale campaign arcs but that means anything I design for those arcs could be used in this campaign as well.


Ideally, this will really feel like a First Edition campaign in the sense of having lots of pre-Drizzt drow but also feel like an early Forgotten Realms campaign because the Zhents play such a key role.

The Secret History of Elturgard

Before the Spellplague, the rise of the faith of Amaunator was in the hands of Daelegoth Orndeir. He was considered a heretic by the followers of Lathander - Amaunator’s predecessor in a sense - and was persecuted by same until the day he caused the Companion to shine in the skies over Elturel.

The land of Elturgard was named by Orndeir and he ruled beneath the light of the Companion, the second sun he had caused to be created. Then, some 30 or so years ago, Orndeir was on retreat in Fort Morninglord, a noted bastion of the faith and the Supreme Potentate’s favourite place for study and meditation. A great beam of sunlight struck the fort at high noon and the inhabitants of the fort were seen no more. It was told that Orndeir was taken by Amaunator to be an exarch of the Sun Lord but Elturgard changed suddenly thereafter.

It became part of Amaunatori dogma that this change not be questioned by the faithful. Indeed, all discussion of Orndeir, Fort Morninglord and the change in government of Elturgard became prohibited. Too much talk would lead to a visit by a church inquisitor and, it was rumoured, in some cases the disappearance of the one who questioned the church’s decisions.

The reality was that Orndeir was a heretic blinded by pride and tempted by the blandishments of Graz’zt the Dark Prince. The Supreme Potentate had captured a minor aspect of Graz’zt within a golden cage of binding. Rather than simply consigning this shard of the Dark Prince to eternal imprisonment, Orndeir revelled in his ability to command and control - to dominate - such a potent creature.

Graz’zt bided his time but was soon able to manipulate Orndeir to his own ends. He explained the history of Amaunator and twisted ancient Amaunatori teachings to show that Amaunator should be supreme on Toril. The Sun Lord should be the supreme lawgiver: he should even replace Bane as the deity of rulership!

Part of Orndeir’s pride was based on his deep knowledge of the Three-Faced Sun Heresy. He believed Amaunator to be one aspect of three faces of the sun: Dusk, Dawn and High Noon. Myrkul was the last deity to hold the portfolio of Dusk and Orndeir secretly sought after any information he could find on the Lord of Bones. He even visited the Mere of Dead Men and gathered some of Myrkul’s essence and traded with the yuan-ti for knowledge about the Crown of Horns, a malefic relic containing the last of Myrkul’s identity.

This heresy also became a topic of conversation with the imprisoned aspect and the Dark Prince also used this as fuel for his own blandishments. In due course, Orndeir’s fall was complete on the day he attempted to perform a ritual within the grounds of Fort Morninglord to absorb the essences of Myrkul and Bhaal (whose black blood still stained the [name] River near the Boareskyr Bridge) and to replace Amaunator but as the Three-Faced Sun.

At this point, Amaunator struck. A mighty blast of sunlight rent the sky and Orndeir was no more and Fort Morninglord became the blackened husk under the ban of Elturgard to this day. In reality, Orndeir was transformed into an undead thing - something like a skull lord, with three heads representing the three sources of power he now wielded - but, although not destroyed, the divine wrath of Amaunator consigned Orndeir to a darkened prison beneath Fort Morninglord with the caged aspect of Graz’zt his only company.

The Dark Prince was - and still is - playing a dangerous game. Ultimately he wishes to steal the portfolio of tyranny from Bane, the Black Lord, and properly enter the pantheon of the Realms. His masquerade as Waukeen, a result of the Time of Troubles, means he is already a member of the pantheon, albeit in disguise.

As for Orndeir, he waits beneath Fort Morninglord, a weakened pawn of the Dark Prince, for the day when someone might free him and he can return to his plans for apotheosis anew.

(Alternatively, I could replace the aspect of Graz’zt with a glabrezu in the service of Lolth. In 3.5E terms, it would have the fiend of temptation prestige class.)

The highest-ranking cleric of the church of Torm has died and been replaced by [name], a Vigilant Seer of the Eye of Justice from Westgate.

The Eye of Justice arrived in Elturgard some three or so years ago. Introduced to the population as experts in combatting the Zhents, they soon showed their value by bringing many Zhent agents to justice and defeating a large Zhent force sent to secure the Boareskyr Bridge.

The leader of Eye of Justice is one of five Vigilant Seers with oversight of the entire order. He has been chosen as the new High Observer and promises a new era of vigilance and justice under his rule. However, things seem darker....

Adventure One: The Slavers of the Second Sun
Levels 1-3

The Dungeon of the Inquisitor is an important site in this adventure. The Eye of Justice faction within the church of Torm is selling prisoners to the Zhents, the drow of Sshamath, the gnolls of the Reaching Wood (although this is via the Zhents) and the yuan-ti of Najara.

A council of Slave Lords have been formed (stolen more or less wholesale from the original A1-4 series.

What I really need is a strong opening. (I really like the first adventure for Fimbulwinter and need something at least as strong as that.)


What do I want from the first adventure?

The trail of the slavers leads to a combined Zhent and drow base in the Reaching Woods. It seems that they are manipulating the gnolls.

Those slaves too weak to be of use are sold to the gnolls who are filling a great charnel pit with corpses. They plan to summon an aspect of Yeenoghu (solo skirmisher 5). 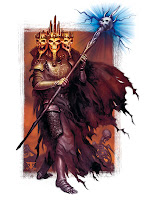 A traitorous Tormite leads the party to Fort Morninglord, the source of the corruption in Elturgard. The party may even confront the heretic, Daelegoth Orndeir, in his current form: a skull lord (solo artillery 7).

This is when the Companion is darkened.

The next place to investigate is Darkhold. Why?

Could it be that the High Observer is secretly meeting with the Zhent leadership giving the party an opportunity to strike?

Is it as simple as breaking the alliance between the Zhents and the drow?

(It is important that the PCs have drow house insignia in their possession before they go any further. If they did not gain any in Adventure Three then they should obtain them in Adventure Four.)

This is D1, D2 and D3 combined. The final battle takes place in a temple of Lolth - for the sake of D3-inspired nostalgia, this will be called the Great Fane of Lolth.


There are four factions in Sshamath as noted in the LFR adventure Enemy of my Enemy. Lolth's faction is not the strongest and the PCs may be able to manipulate the other factions into destroying the Lolthites... with, of course, the leader of that faction reserved as a foe for the PCs to fight.

So far, this is feeling like a stronger story than When the Sun is Black. It steals a lot of the ideas from that campaign outline but the drow feel like a better "finish" to the campaign.


I also love the way that - finally! - I can run the D1-3 adventures after wanting to do so for close to 30 years! It scratches the drow itch. It scratches the Zhent itch. And, with some additional work, it will scratch the beholder itch as well.


Expanding into the Paragon and Epic Tiers


The 4E adventure Tomb of Horrors is a solid update of the 1E classic and could be adapted to the post-Spellplague Forgotten Realms. Rather than Acererak being the BBEG it makes more sense, Realmslore-wise, to replace him with Larloch. Coincidentally, Larloch's demesne - the Warlock's Crypt - is on the western border of Elturgard.


I could use Larloch and the Tomb of Horrors by making it Larloch's goal to replace Mystra as the deity of magic. To do this he needs both souls, as Acererak required for his schemes, and also to harvest the arcane energies of Plaguelands. I am thinking that he has connections within Sshamath which he manipulated to have House Zauvirr attempt their corruption of the Companion. In fact, the energies of the Companion are a vital component in the apotheosis ritual that Larloch has designed.


While I would be happy to end this campaign simply with an updated version of 1E's D3 The Vault of the Drow, it may be that the players wish to continue the game so, in that case, I think I will use this as the expanded plotline.

Email ThisBlogThis!Share to TwitterShare to FacebookShare to Pinterest
Labels: Amaunator, Dark Weavings, Drow, Elturgard, Eye of Justice Heresy, Graz'zt, Larloch, Rise of the Underdark, Tomb of Horrors, Vault of the Drow, When The Sun Is Black, Zhent