When the Sun is Black - Brainstorming


Ever since I first read about the second sun above Elturgard, I have been imagining scenarios that would allow the Companion, as it is known, to be darkened turning Elturgard from a land of eternal day to a land of eternal night. Many factions would desire this and this campaign is designed to explore what would happen if various factions - the Cyricist Zhents, the Banite Zhents and the Netherese - made this event their goal.

The campaign is also supposed to be about yet another civil war within the the Zhents of Darkhold involving the Cyricists against the Banites. This time, however, the Banites are being manipulated by another faction - beholders. A beholder hive with long-time ties to the Zhents. The hive wants to return to the "good old days" when the Zhents would provide them with prisoners and magic to satisfy their various appetites.

As the Companion was a product of Epic magic, its corruption would also unleash a lot of power. My first thought is that the moment when the Companion is corrupted - assuming this is performed by the Banite faction - would result in the summoning of a (level-appropriate) aspect of Bane.


Similarly, if the corruption of the Companion is performed by the Cyricists, I could see it being transformed into a colossal unholy symbol of Cyric that lashes out with purple fire against the Dark Sun's enemies. As for the Netherese, if the corrupt the Companion something like a huge nightshade might be summoned (and I am sure I have the miniature for this, just as I also have the miniature for the aspect of Bane).


Of course, the corruption of the Companion is something that might occur as the party advance from Heroic to Paragon Tier (with the balance of the campaign then based around reversing the corruption). I rather like using gnolls from the Reaching Woods, werewolves from the Werewoods, corrupt paladins of Torm and a multitude of Zhents until this point is reached.


The Call of the Carrion King 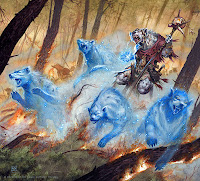 The gnolls of the Reaching Woods play an important role in this campaign as they comprise the major non-PC race humanoid foe.


Their primary goal is to summon an aspect of Yeenoghu that will lead their packs on a rampage through the lands of Elturgard. 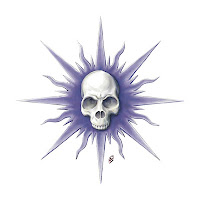 As I have been plotting out the possibilities for this campaign I have been making it more and more complicated. What started out as a Banite plot to corrupt the Companion now involves Cyricist Zhents against Banite Zhents, manipulations by beholders, further manipulations by followers of Shar and Graz'zt and who knows what else.


Why not keep it simple?


The Darkhold Zhents are largely followers of Cyric. There is no Banite schism at present. Even the tolak (supreme commander) of Darkhold is a Cyricist (and not a beholder). The Cyricists simply want to disrupt the Land of Two Suns. They don't like the light. They want to corrupt the Companion so that it becomes a giant unholy symbol of Cyric and Elturgard becomes a dark land devoted to the Prince of Lies.


I can still throw in Banite spies, agents of Graz'zt, Netherese nightcloaks of Shar - even drow followers of Lolth - but I should keep the campaign firmly focussed on the Cyricist faction that represents the majority of the Zhents of Darkhold.


There. I feel better now. 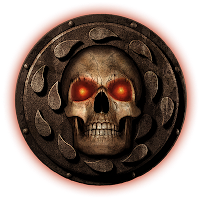 At the risk of stealing a large part of the plot of the first Baldur's Gate CRPG, I rather like the idea of the Cyricist Zhents rediscovering an old Bhaalist ritual that allows them to corrupt iron and steel such that it weakens dramatically to the point where it is nearly useless in combat.


Imagine the paladins of Elturgard having their arms and armour weakened in this way? Who would defend the Land of Two Suns? Who would uncover the source of this corruption? What if it was even tied to the Companion? Bhaal's blood from the Boareskyr Bridge has been used in the recreation of the ritual. Furthermore, another ritual using Bhaal's blood has corrupted the Companion just enough that it is providing the power to weaken metal. Its light, in effect, is the medium by which the power of the Bhaalist ritual is imparted to the arms and armour of the paladins!


It's up to the PCs to uncover the mystery!


- A dwarven mine in the Far Hills or Sunset Mountains where the ore is mined and arms and armour are forged by dwarves in exchange for food and lumber.
- An underground and partially underwater temple of Cyric near the Boareskyr Bridge.
- Another underground temple of Cyric beneath the Companion.


It's consistent with my new-found desire to keep the campaign simple by focussing on the Cyricists plus it's an idea I have wanted to run with since I played the first Baldur's Gate CRPG for the first time.


A Possible Sequence of Adventures


If I am going to go with the idea of the Companion corrupting the arms and armour of the paladins of Elturgard then I am going to need an adventure or two that will allow the PCs to show that they are loyal to Elturgard and can be entrusted with a mission of such importance.

Adventure One: The Assassins' Run

Beneath the streets of Scornubel is a dungeon once inhabited by a Bhaalist assassins' guild. Here, a Cyricist cleric holds sway and sends out gangs of bashers each night to take captives. Some are sold into slavery in Najara, while others are used for even more vile purposes in the Lost Temple of Bhaal near Boareskyr Bridge. A portal links the two locations.

The Cyricist in charge has a skulk assassin as his (or her) chief assistant.

The adventure begins with 1. the Zhent recognition code that is the basis of the name of this campaign being overheard and 2. a Zhent mage attacking a boy-thief.


This could largely rip-off the A1-4 adventure set in an ancient temple and involving slavers. The only difference is that this is the site where the rituals are performed to cause the arms and armour of the paladins to decay. The power of the ritual is fed into a small duplicate of the Companion which otherwise looks like an unholy symbol of Cyric.

This duplicate was created using the corrupted holy symbol of Daelegoth Orndeir.


Dwarven mines affected by the same Bhaalist ritual. Zhents are guarding the place. (What if the dwarves also know about the Zhent plan to somehow awaken an earth titan from beneath Darkhold? That could involve the Orcs of Stonefang Pass adventure with Zhents taking the place of orcs.)

Adventure Four: Into the Reaching Woods, Part One - The Crystrum of Tranquillity


Could this be about freeing the elves from their green dragon-induced nightmare?

Adventure Five: Into the Reaching Woods, Part Two - Call of the Carrion King


Ultimately this is about fighting the aspect of Yeenoghu and thus weakening the gnolls before their attack on Scornubel.

Adventure Six: The Siege of Scornubel


I need to look at Heroes of Battle for some more ideas for this adventure. A unit of Tormite knights turn traitors in the middle of the battle. It seems that they used to guard Fort Morninglord.


This dungeon adventure uses the map and ideas from 2E's Bastion of Faith. The undead Daelegoth Orndeir is discovered and defeated.

Adventure Eight: The Infiltration of Darkhold


While the Zhents march on Elturel, the PCs are sent in the other direction to decapitate Darkhold's leadership. They arrive in time to stop an alliance between the Zhents and the drow.

Adventure Nine: The Corruption & Cleansing of the Companion


While the Zhent army lays siege to Elturel, a force of groundlings and Cyricist invokers appear in the temple of Amaunator linked to the Companion (think of the corrupted temple in The Speaker in Dreams) attempting to convert the Companion into a colossal unholy symbol of Cyric. They may even succeed for a time before the PCs use the Crystrum of Tranquillity to reverse the corruption.


The PCs have demonstrated that they are a major force for good in the Western Heartlands. Knighthoods and lands await them from the hand of the High Observer. The power of the Darkhold Zhents is largely broken.