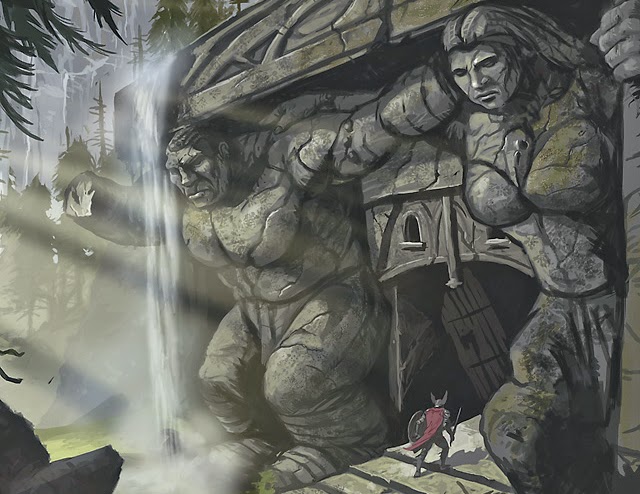 It seems the first time anything about the Sword Mountains was published was in 1996's The North boxed set. I had thought it would have been mentioned in either FR5 The Savage Frontier or Volo's Guide to the North but it seems I am wrong.

The boxed set notes that "orcs, bugbears, kobolds, leucrotta, and other dangerous creatures" can be found here which provides a rather nice simple monster roster. (Personally, I think leucrotta are one of the most criminally underutilised creatures in D&D, something I am presently trying to rectify in my own game.)

To that list, I would definitely add perytons - also horribly underutilised, IMO - and gargoyles for flying threats particularly if the PCs are climbing, together with ogres and hill giants (it's also a perfect location for a conversion of G1 Steading of the Hill Giant Chief).

It's also tempting to simply steal the wilderness portions of S4 Lost Caverns of Tsojcanth and WG4 Forgotten Temple of Tharizdun with very little modification other than stat conversions. Similarly, 3E's Forge of Fury would also fit right in as a former outpost of Delzoun.

Frankly, I think those basic ideas are enough for most DMs to spin the Sword Mountains into a fairly interesting sandbox.

As I mentioned in an earlier post, I actually prefer the idea of the Cragmaw tribe being orcs rather than goblins. Part of this is because I cannot think of a reason a tribe of goblins would name themselves Cragmaw (I mean, I can, but it doesn't really resonate) whereas it makes perfect sense for orcs.

What I am thinking of specifically, is that this is a tribe that, while not matriarchal, is heavily dependent for direction on the auguries and manipulations on a group of female orc clerics of Luthic the Cave Mother. Originally from The Crags where they frequently clash with the Uthgardt barbarians, the Cragmaws are actually an offshoot of the fallen orc kingdom of Uruth Ukrypt. Their clerics of Luthic - cave witches, for lack of a better term - have been receiving signs and portents from the Cave Mother that it is time for Uruth Ukrypt to be reborn and for a new orc horde to strike at the North. However, before the horde can be formed, certain relics of Uruth Ukrypt - I have previously mentioned the Bloodbone Throne of Uruth Ukrypt - need to be found. And that is why, for example, there are orcs at Wyvern Tor.

Anyway, this search for relics leads to at least two published adventures.

The orcs who are present are even attempting a ritual to invest their leader with more power. Stopping that ritual being performed can be a key part of the adventure.

I also like the complication that an Zhentarim ambassador is present seeking to form some sort of alliance with the orcs. While that would work perfectly in my own game, for those DMs reading this and running the 5E version of the Realms where the Zhentarim are not heroic but they are a player-friendly faction, this probably wouldn't work but some Red Wizards of Thay or even the Cult of the Dragon could fill a similar role.

While 4E is rightly derided for having some of the worst published adventures of any edition - if you see Mike Mearls, Bruce Cordell, or Bill Slavicsek given design credits then assume it is complete and utter garbage - the later adventures were actually rather good. And although Orcs of Stonefang Pass is often considered the weakest of the later adventures, I think it has a tremendous amount of potential... particularly in the context of the Cragmaw orcs.

Before I give some ideas about how to use it, I just want to mentioned the dungeon of Southkrypt first mentioned almost in passing in FR1 Waterdeep & The North. FR5 The Savage Frontier then had this to say about this dungeon:

This abandoned dwarf-hold east of Leilon is the lair of many strange and dangerous creatures. Adventurers probing the upper levels have encountered norkers and bands of ravening gibberlings. Deeper forays have uncovered xaren, vilstrak, vargouilles and storopers.... In addition to the creatures mentioned, the lower halls of Southkrypt are lair to a vampire hill giant shaman (6th level) and his three vampire hill giant slaves.

What is remarkably consistent about this group of creatures is that they are, in later edition terms, all tied to the element of earth. FR11 Dwarves Deep further explained that Southkrypt was part of the ancient fallen dwarven kingdom of Haunghdannar which was notable for being the only dwarven kingdom that took to the sea and that the sea subsequently drove those dwarves mad. To me, that sounds like Haunghdannar was touched by the power of elemental or primordial chaos, and that is very much the tack I have taken in my Neverwinter campaign where the PC dwarf actually discovered his Haunghdannar heritage and tapped into some of their elemental magic.

It's also interesting how these basic ideas from 1E products take on new life when you look at the ideas through some of the 4E concepts such as the Elemental Chaos etc....

So, assuming that, consistent with the various hints, Southkrypt is touched by the power of elemental earth, having it substitute for the dungeon described in Orcs of Stonefang Pass makes perfect sense. To summarise that adventure for those not familiar with it, Stonefang Pass is a dwarven dungeon that is a prison for an earth titan (basically a larger - possibly dumber - hill giant that is very close to an earth elemental in appearance). So, what if the cave witches of the Cragmaw orcs have determined that freeing the earth titan under their control - let's assume they can perform a ritual to bind its will - is an important part of their plan to restore Uruth Ukrypt? The earth titan can, of course, wreak havoc on a battlefield but its command of elemental earth means it's a fantastic way of delving beneath the earth to uncover more of the secrets of that ancient orc kingdom.

If you're wondering where to put Southkrypt, I think somewhere around the letter T in Sword Mountains on the regional map makes sense. And for more on the hill giant vampire, he is covered in the Children of the Night article in Dragon 236 (although I don't think I would personally use that idea).

Iniarv's Tower aka The Tomb of Horrors

This idea is completely unrelated to orcs or anything else I have mentioned to date.

Iniarv's Tower is noted as being on the western slopes of the Sword Mountains and east of the High Road and Mere of Dead Men. On the regional hex map, I would put it in the bottom row of hexes immediately to the right of the High Road.

Iniarv is noted in The North boxed set and elsewhere as being a demilich. He was also revealed in the Eye of Myrkul adventure in Dungeon 73 ( where his tower is actually mapped) as being the reason that the Mere of Dead Men exists.

That background information aside, beneath his tower seems to be a good place to insert the Tomb of Horrors with Iniarv replacing Acererak. And there is no better way to wipe out a group of PCs, especially for those DMs who are itching, inexplicably, to have their groups start again with Hoard of the Dragon Queen. (Sorry, that's my anti-Tiamat bias showing. People often complain that drow are done to death... but Tiamat, for me, is the one who has had the most over-exposure.)

As I have been working through these posts, it's clear that I am focussing on an orc threat to the region depicted on the map which ties in nicely with the presence of the orcs in Neverwinter. Red Hand of Doom had its goblins but I cannot think of a campaign where orcs really served as major antagonists. Tiamat has been done to death across multiple editions so maybe it's time to steal a basic idea from Lord of the Rings and have the orcs on the march?