There are not enough volcanoes in D&D. This is your chance to rectify that oversight.

Some people see the name "Hotenow" and wonder if it's a play on "Hot Enough". It could be. The name was not invented by Ed but by Paul Jacquays who wrote FR5 The Savage Frontier and which, in turn, was based on his The Enchanted Wood sourcebook/adventure for DragonQuest.

Among his many early RPG claims to fame is the dungeon masterpiece Caverns of Thracia which, in turn, has inspired one of my favourite web articles on dungeon design, Jacquaying the Dungeon. While Gary Gygax was championing incoherent randomness in both his adventure and rules designs, Paul Jacquays was writing such adventures as Caverns of Thracia and Dark Tower (published by Judges Guild) where there was some sort of design logic. He really was a breath of fresh air in the early days of this hobby.

This forest east of Neverwinter seems to have a magical quality about it, or at least an air of mystical secrecy. The always-warm Neverwinter river, which flows out of the wood, has its source deep beneath Mount Hotenow, a sleepy volcano in the northern wood. Fire elementals are said to live deep within Hotenow. The steep mountains to the north of Hotenow hide griffon lairs.

In a section of the fallen dwarven kingdom of Gharraghaur it mentions:

Gharraghaur was the first of the great dwarven kingdoms to fall to orc attacks; its people were too busy mining to arm themselves in numbers enough to withstand the orcs before it was too late. At its height, the borders of this realm were as follows (using the old dwarven names wherever possible): east from the sea at Lyntara, a blue-veined, uninhabited rocky headland north of present-day Port Llast, to Glaurimm, the lofty volcanic peak known today as Mount Hotenow.

When Mount Hotenow is first mentioned in this book, it is in connection with the volcano's eruption that reduced Neverwinter to something little better than a ruin. However, the volcano is subsequently introduced as follows:

For untold generations, this volcanic peak quietly fumed in the depths of Neverwinter Wood. Rumoured to be the source of the warmth of the Neverwinter River, Mount Hotenow once featured in the bedtime stories of Neverwinter's citizens as the home of fire giants, red dragons, and other blazing beasts. People looked upon the fantastic peak as a thing of beauty - until its wrath was unleashed against Neverwinter in the cataclysm. Now jutting like a broken tooth from the forest, Mount Hotenow still fumes, the land occasionally quaking with the echoes of its fury.

It is later further described:

What resembles a mouth to the Nine Hells gapes open at the southwest edge of the Crags, in the form of the volcano known as Mount Hotenow. Its occasional rumblings and sporadic gouts of smoke are ample reminder that it is never entirely at rest. Hot springs and magma flows run beneath its rocky exterior, ensuring that Neverwinter River never freezes. It's small wonder, then, that the mountain stars in so many local legends. Some believe Mount Hotenow does sit atop a passage to the Hells; others say it's a doorway to the Elemental Chaos. Still others claim it hides the entrance to Gauntlgrym or is the home of a mighty red dragon. Stories of demons, giants, and all manner of flame creatures have existed here since before recorded history. Today, an often-told tale in Neverwinter and Helm's Hold suggests that anyone who dares to enter Mount Hotenow's caves is cursed to die in fire within the year.

The fire giant Gommoth is then mentioned, a hunchback exiled from his tribe and self-styled king who reigns over other fiery creatures (fire elementals, magma beasts, and salamanders are mentioned).

Putting it Together
Hall of the Fire Giant King

The first thing that sprang to mind when I was looking at Mount Hotenow for my extant Neverwinter campaign was, naturally enough, the idea of setting an adaptation of G3 Hall of the Fire Giant King there.

Chris Perkins wrote an excellent conversion for 4E in Dungeon 200 but it is for level 18 characters due the level of fire giants in 4E. As I have mentioned elsewhere on this blog, I reduce the level of monsters to match their 1E hit dice so, IMC, a normal fire giant is a level 11 soldier. That said, as I only plan to run my campaign to about level 12 or so, it might end up being the final adventure and, if this is the case, I suppose stopping another eruption of the volcano might be the basic plot.

Alternatively, Ed Bourelle of Skeleton Key Games produced a book of maps called Dungeons of Doom that was published by Green Ronin. In it, he includes some maps of dwarven halls inundated with lava - these could be ruins of ancient Gharraghaur - and I could imagine setting that location in Mount Hotenow. If I did that, I would probably cut back on the fire giants and go with azers - fiery dwarves - instead. However, I would reserve a fire giant or fire titan as the final "boss monster".

That also suits my collection of miniatures better as I only have a single (Huge) fire titan. I could make him a level 11 elite soldier which has the same XP value as a level 6 solo soldier. At that level, I could make this fiery dwarven delve into an adventure for characters around levels 4-6, particularly as my azers are levels 2-5, matching their hit dice in 1E.

I could still use the basic plot of stopping the volcano, but at a much lower level. 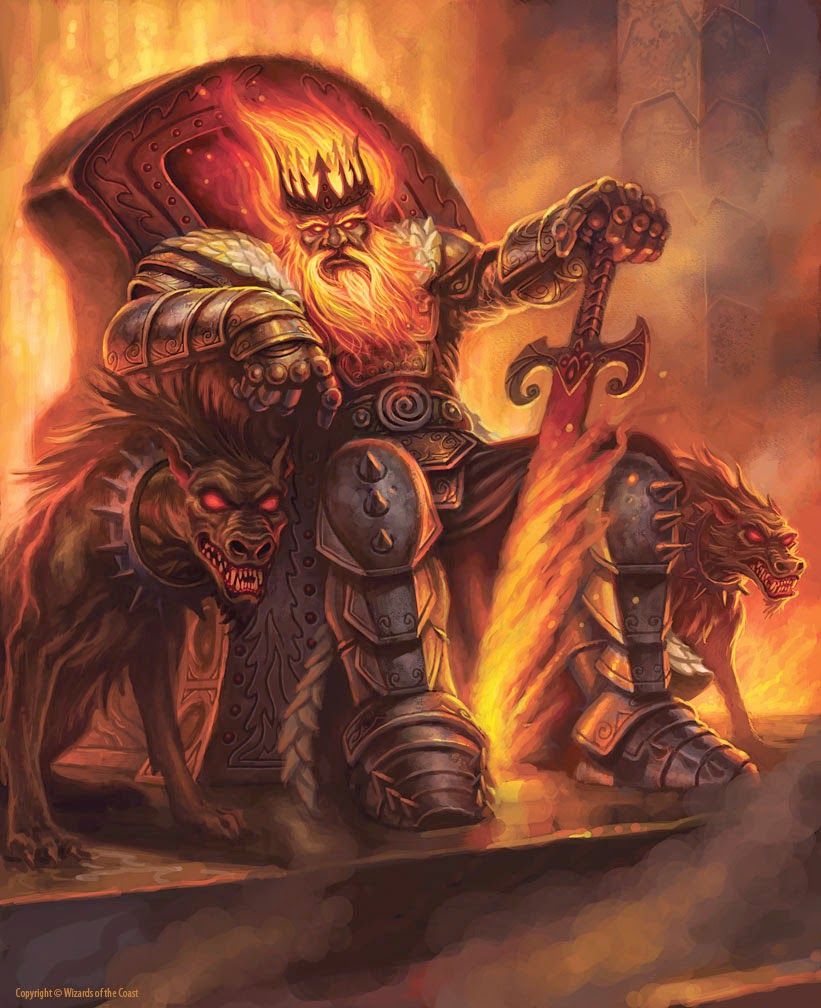 White Plume Mountain
I must admit, I only thought of this while writing this post.

For those of us who have been playing D&D since the 1980s (or earlier), thinking about a volcano in the context of D&D should almost automatically produce memories of playing in and/or running S2 White Plume Mountain. It was also expanded and republished for 2E as Return to White Plume Mountain.

The original is a bit of a fun-house masterpiece with a lot of interesting and even weird encounters that many of us can still remember 30+ years later, such as the invisible giant crab in a clear bladder inside lava. The author Lawrence Schick has subsequently admitted in interviews that it is based on some samples he produced for dungeon encounters as part of his application for employment at TSR and that he never saw it as an actual adventure to be published, per se. That said, I like it. It really has a certain charm... and I dare any DM reading this to run it in Mount Hotenow!

I also noticed that the conversion work has already been done for 5E DMs. In conjunction with the re-release of the 1E adventures S1-4 in hardcover as Dungeons of Dread in 2012, WotC also included stat block conversions in at least one of the 5E playtest packets.

So, why not? While "fun houses" are not normally my cup of tea, it might work as a way of finishing a campaign based on Lost Mine of Phandelver with something that is very different in tone, but still rather deadly.

This is, without a doubt, one of my favourite adventures of all time. It's also a reminder that Bruce Cordell was once a great adventure writer. Firestorm Peak? Hmmm, that sounds like another name for Mount Hotenow. This could slot right in....

Summing Up
I do like the idea of Mount Hotenow threatening to erupt again and I think a lava-filled dwarf-created dungeon ruled by a fire titan and populated with his azer slaves is something my players and I would enjoy. Of course, an adaptation of Hall of the Fire Giant King would also be interesting but that's at a level where I would be looking to finish the campaign and, to me at least, it doesn't strike me as the sort of adventure that has the campaign finishing on a high note.
Posted by Scrivener of Doom at 23:49