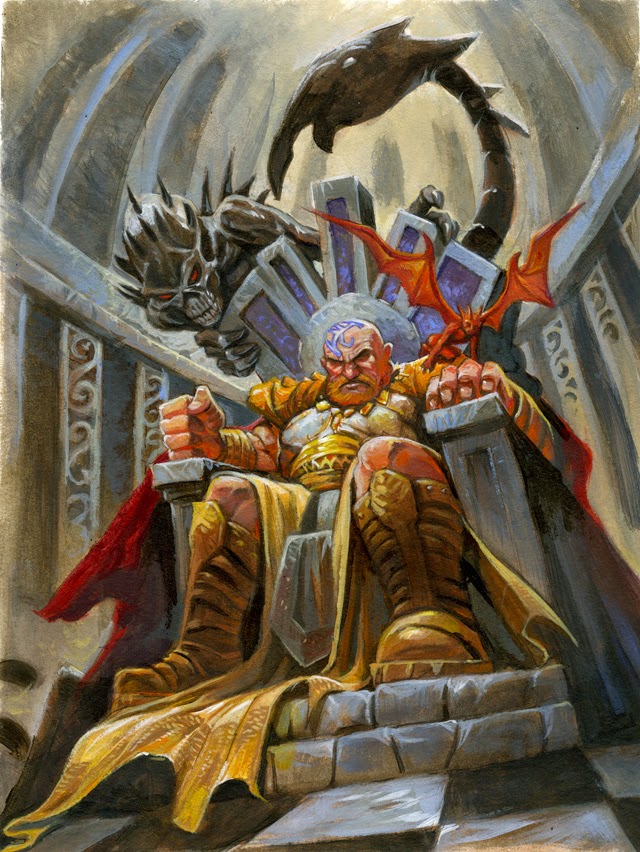 To the best of my knowledge, "Starmetal Hills" has only been mentioned twice before in Realmslore. The first time was in Demihuman Deities and then in the Interactive Atlas which compiled a host of 2E-era FR maps on CD-ROM and which is a collectors' item today.

Berun's Hill, however, appears in quite a few sources so that's what I will be focussing on here.

I'll quote only from the first one but they say largely the same thing:

This local landmark is a bare-topped, conical hill that commands a splendid view of the valley of the river Dessarin to the east. This lookout has often been used in times of trouble to watch for advancing orc tribes coming down from the north and east. It is named for the famous ranger Berun, who met his end here at the hands of such a horde.

He failed to stop the orcs, but slew over three hundred single-handed ere he was overwhelmed. Bandits sometimes watch from the hilltop for the approach of likely victims. Northern legend has it that a dwarven tomb lies under the Hill, rich in golden armour and treasures, but none have ever found it, and no dwarves of today know any more of it than the legend.

Both sources also note the following about Berun:

It is probable that Beorunna (or Berun in the Northman tongue) was a hero of the pre-Uthgar people who merged with the followers of a renegade from ancient Ruathym. Legend holds that Beorunna destroyed Zukothoth, a type IV demon, in the cavern, collapsing it in on both of them.

The boxed set had this to say about Berun's Hill:

This local landmark is a bare-topped, conical hill that commands a splendid view of the valley of the Dessarin to the east. This lookout is used to watch for advancing orc or barbarian tribes coming from the north and east. It.s named for the ranger Berun, who met his end here at the hands of such a horde. He failed to stop the orcs, but single-handedly slew 300 before he was overwhelmed.

Northern legend mentions an ancient dwarven tomb beneath the hill, rich in golden armor and treasures, but none have ever found it. Bandits often watch from the hilltop for the approach of victims, a much easier treasure to obtain than riches long since lost.

To me at least, Demihuman Deities offers the most interesting information about Berun's Hill and my subsequent ideas are going to draw upon this:

In the Year of the Crown (1351 DR), nearly fifty priests of the Finder-of-Trails established the Vault of the Lost Wayfarer in a great natural cavern at the heart of Berun's Hill that had once been the crypt of Maegar, son of Relavir, grandson of Anarok, of the Royal House of the Helm of Gharraghaur. The existence of a dwarven tomb beneath the tor has long been the talk of legends in the North, but the Marthammoran priests who finally found the cavernous vault discovered that it had been plundered long ago by duergar who had tunnelled up from below.


Berun's Hill and Twilight Tor - Mrinolor and Anaurdahyn in the tongue of the dwarves - are the southernmost and northernmost tors respectively, of the Starmetal Hills, a range of knolls that runs parallel to the Long Road west of Longsaddle and has been the target of several meteor showers in recent millennia. Berun's Hill and, to a lesser extent, Twilight Tor command a splendid view of the Dessarin Valley to the north and east, and both hilltops have long been employed by the followers of Marthammor both to worship the Watcher Over Wanderers on moonless nights and to observe passing travellers and caravans on the Long Road.

Under the leadership of Immar Mistwalker, High Old One of Marthammor, son of Gadlyn, blood of Dorn, the Watchful Eyes have gradually extended their aegis over a region stretching from Wyvern Tor in the foothills of the Sword Mountains to Twilight Tor and from the town of Triboar to the Neverwinter Woods. Thanks to the regular patrols and ready assistance of the Watchful Eyes, small dwarven holds in the area have been able to reestablish long-sundered trade links with the neighbouring human communities along the Long Road and the River Dessarin.

Putting It All Together

So, we have some hills named Starmetal which suggests that meteor strikes seeded the area with various metals and ores. (This, of course, also explains the dwarven interest in the place.)  We have the legend of a dwarven king buried with treasures of gold. We also have a dwarven temple which, if you continue reading Marthammor's section in Demihuman Deities, can have its features described in such a way so as to differentiate it from, say, a temple of Moradin.

I rather like the idea of several smaller sites - played out mines hosting such creatures as basilisks, derro, and troglodytes - as well as surface encounters with perytons, wyverns, and their ilk. A dragon wouldn't go astray, either. In 4E terms, I would probably use a grey dragon (a fang dragon pre-4E) although a young red dragon could also be appropriate for the terrain. I think I would avoid orcs - they've been featured enough in these posts already - but goblins, ogres, and maybe a handful of hill giants might work well in this area.

But to me at least, the centrepiece of any adventure(s) set in the Starmetal Hills is the exploration of the Vault of the Lost Wayfarer.

When I was preparing my current Neverwinter campaign a couple of years ago - and the picture I have chosen for this post provides a hint of the direction I took - I decided to make Vault the site of a potent earth node that was used to seal away a potent diabolic creature, an aspect of Malkizid the Branded King. (Malkizid was invented by Rich Baker and appears in Champions of Ruin. Personally, I completely ignore any reference to Asmodeus in any published D&D material and use Malkizid instead. He's far more interesting.)

However, the Spellplague weakened the bindings that held the aspect in check, and he was soon able to work some of his more subtle magics on the dwarves in the Vault. Now, nearly 100 years later, most of the original dwarves have been massacred and a band of durzagon from the Realms Below (more accurately, the city of Gracklstugh) now dwell in the Vault in their place. The high priests, however, is a gold dwarf and a former dwarven cleric of Marthammor before he fell to the blandishments of the Branded King.

In case you're wondering what a durzagon is, in 3E's Fiend Folio, they were revealed to be a cross between a duergar and a bearded devil. For some inexplicable reason - and this was one of the things I didn't like about 4E - 4E made this the default for all duergar. I still like to keep them separate: the psionic duergar or grey dwarves and the diabolic durzagon.

At the risk of riffing off one of the most common adventure tropes of all time, the durzagon leaders and their duergar followers are raiding the roads and trails around the Starmetal Hills for sacrifices all of whom then become fuel for the rituals that the gold dwarf heretical cleric is performing to try and free the aspect of Malkizid from this prison.

I also rather like the idea of Marthammor intervening by sending a meteor shower for the PCs to investigate or, as is noted as his way of manifesting in Demihuman Deities, a glowing spectral blue mace that leads the PCs to a group of durzagon-led duergar slavers who have just taken prisoners.

As the PCs seek to end their depredations, they discover the far greater risk of an aspect of Malkizid being released (IMC, aspects are roughly level 12 elite monsters not Epic Tier threats). Of course, if the PCs are successful, perhaps that great golden treasure unclaimed since the days of 1E will be theirs!

In short, it's a fairly simple site-based adventure in a corrupted dwarven temple with evil rituals providing both an interesting backdrop and a countdown timer for the successful completion of the adventure.

Personally, I am looking forward to running it for my group, as clichéd as it might be!
Posted by Scrivener of Doom at 23:34