Princes of the Apocalypse "officially" begins at level 3 in Red Larch so the adventure gives some ideas for mini-adventures to take PCs from levels 1-3 if necessary. These mini-adventures are also centred on Red Larch, as are some of my own ideas mentioned in my <previous post>.

However, looking at the <regional map> some players might be wondering why they are in Red Larch and what route they took to get there. One obvious answer is that they came via Amphail so what happened when they were there?

Turning to 2E's Volo's Guide to the North once again for source material, it seems there are one or two things that might interest PCs en route to Red Larch....

Princes of the Apocalypse

Princes has little to say about Amphail and what it almost exactly the same as what appears in 2E's Volo's Guide to the North and the later 2E product The North boxed set which is also largely reprints from Volo's:

Amphail lies on the Long Road, about three days’ ride north of Waterdeep. The town is named after Amphail the Just, one of Waterdeep’s early warlords, who is said to haunt the surrounding hills in spirit form, frightening away monsters. Horses are bred and trained here, rich Waterdhavians maintain secluded estates in the hills, and farmland is plentiful. Stands of dark duskwood and spruce trees are everywhere.


In one corner of the town square stands the Great Shalarn, a black stone statue of a famous war stallion bred in Amphail long ago. Gelded by a prankster, the rearing horse is often painted bright colours by high-spirited locals. Children are allowed to hurl stones at birds perched on the statue, to keep it free of droppings. The children often climb it themselves and cling precariously to the high, tilted saddle, waving their arms and commanding imaginary armies into battle. Within spitting distance of the statue is the Stag-Horned Flagon, a cozy tavern.


Reason to Visit: Great Shalarn is a popular place to leave cryptic messages, either tucked under the statue’s hind hooves or slid between the sculpted curls of its tail.


There's not a lot to work with there but it would be in the finest tradition of a sandbox-style campaign for the PCs to find a message in the statue of the Great Shalarn and for that message to lead them to an adventure.

On a related note, a DM planning to run Princes largely as written could place a clue to the identity of one or more of the agents of Elemental Evil in Red Larch within a message in this statue.

Volo's Guide to the North

One of the points of interest called out in Volo's is the horse pond and the tomb reported to lie beneath:

For a local spot of interest, you might try the Horse Pond. It'’s a placid, muddy home to frogs and water-lilies, and it is said to hide the underwater entrance to a tomb.

Local lore tells of the Maiden King, a female human chieftain who ruled here an age ago. According to the tale, she sleeps forever on a stone bed, with a magical two-handed sword on her breast. Adventurers have entered the pool several times looking for her sunken tomb, and at least one band did not return. Some years ago, a number of undead skeletons emerged from the pond and stalked through the village, strangling several folk before the beasts were hacked apart. The truth about what lies in the depths of the pond remains to be revealed. However, it is used daily, without incident, to water dirty, thirsty horses.

The Horse Pond Tomb. That's not a bad name for an adventure and it is definitely the basic sort of old school adventure that is perfect for kicking off a new campaign. Imagine the PCs arriving in Amphail only to discover a small horde of undead skeletons rampaging through the village. They save some of the folk of Amphail and are then hired to put a permanent end to the undead threat. What then follows is some underwater exploration which is particularly freaky when your characters are only level 1 before the PCs uncover the entrance to an ancient barbarian queen's tomb as otherwise described above.

Maybe the problem has been caused by a necromancer or evil cleric taking up residence - what if the Maiden King was a folower of Garagos the Reaver and it is a cleric of Garagos who has come back to fulfil an Arthurian prophecy that the Maiden King will rise again? - and animating some of the dead. Alternatively, maybe a thief broke through some protective wards and eventually awakened the Maiden King who is actually a creature of great evil bound beneath the earth some centuries ago.

In short, there's an extensive set of barrows, some of sort of necromancer or cleric, a trapped thief, and an a horrible unique undead barbarian queen who wants to regain her kingdom. Yep, that would work.


Then there are two more adventure locations that hold some promise:

At the north end of the village stands the burned ruin of the Laughing Bandit Inn. It was destroyed in a wild spell battle three winters ago.

The battle was between a mysterious masked mage whose skin was ink black (some folk believe he was a drow) and the wizard Thalagh Tarn of Tethyr who was blasted to bloodspray. It'’s not clear if the other mage escaped the inferno of the inn. Many, many bones, cracked by the heat, were found in the ashes.

As the owner died in the conflagration, there is no great interest in rebuilding. Local children love to play in the ruins, where many “jools” of melted, puddled glass can be found. Somewhere under the charred timbers lie the inn’'s cellars, which may still contain some valuables. There’'s no way to get down there without doing a lot of digging that would have to be done in full view of the children and anyone passing on the road.

To the north is a disused temple to Waukeen. It is rapidly becoming overgrown with ivy and creeping vines.

Cellars of the Laughing Bandit Inn. Instead of requiring the PCs to dig into the cellars, perhaps the coming of Spring has caused the soil to subside so that there is now a narrow entrance to these old cellars but the folk of Amphail are too scared because of old legends to explore them for themselves. Instead, the PCs are hired to do so and first discover merely old storage rooms... but then a prison where captives were kept for sale to the drow.

That then suggests some sort of passage into the Underdark and maybe a great fungus-filled cavern with the remains of a drow outpost. Perhaps there is a drider - with pet hunting spiders - there that survives by hunting myconids with the latter surviving from the rich fungal forest that they tend.
Ruined Temple of Waukeen. I suspect the reason this temple was ruined was because, in the 2E era, Waukeen was a prisoner of Graz'zt and her church went into a period of decline. (In my own campaign set in the 4E era, this is still true but her church is thriving secretly run by a cult of Graz'zt.) What if the ruins are still haunted by minor demons from that era? And what if the church of Waukeen is now wanting to reclaim their former temple and is hiring adventurers to clear out the ruins? That's a fairly simple mini-adventure that could be ad libbed with the right map such as the monastery dungeon that features in the original Dungeon Master's Guide.

Beyond these three adventure ideas, there are several other suggestions in Volo's but they require a bit more work/thought.

T1 The Village of Hommlet 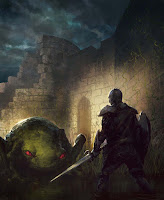 I hate, loathe, detest, and despise T1-4 Temple of Elemental Evil as being one of the most overrated, incomplete, nonsensical, and basically poorly-designed (and randomly-generated in large parts) pieces of crap ever published for D&D... but that's because I have such high regard for The Village of Hommlet and waited so long for Temple of Elemental Evil that a never-actually-finished-but-still-published piece of garbage was never going to satisfy my desire for a worthy sequel.

My rants aside, the Moathouse is a classic adventure location that almost needs to be in any campaign based on Elemental Evil, including Princes of the Apocalypse.

What if Amphail substitutes for Hommlet? The Moathouse can represent a move by an almost renegade faction of the Elder Elemental Eye to move further south toward Waterdeep and, of course, that faction would be headed up by Lareth the Beautiful....

Really, can Princes of the Apocalypse even be considered a successor to Temple of Elemental Evil if it doesn't begin with the Moathouse? :) Seriously, if the PCs need to be level 3 by the time they reach Red Larch, why not start Princes with an update of the Moathouse? And, if you do so, make sure you post about it online so that the Greyhawk purists weep....

I've run a few homebrewed "adventure paths" over the past few years and I have found that they ones that have worked best have begun with something a little bit different so that the players get some variety and don't feel like they're being railroaded from day 1. I think starting in Amphail and then travelling to Red Larch can provide that sort of start, even if the PCs end up taking on Lareth the Beautiful in an adaptation of the Moathouse from T1. But it might be better to run through one or more of the other adventure ideas first just to get the players used to their characters before they begin the process of tackling Elemental Evil....
Posted by Scrivener of Doom at 21:09