I am almost finished writing up my Neverwinter: Year of the Ageless One session report relating to the PCs bearding the Dead Rats in their lair and decapitating their leadership so that one of the PCs - a Dead Rat deserter - could take over the organisation and use it for more "noble purposes".

And these are the Dead Rats they fought their way through....

These are the common street thugs employed by the Dead Rats. They're a scurvy-ridden bunch of malcontents, traitors, and former pirates with nothing better to do than become bashers for a bunch of wererats.

That also means they can be found beating up little old ladies, tormenting stray cats, taking candy from babies, and similar sorts of things that make players hate them before they have their characters mow them down like wheat before a combine harvester. Ahhh, I love minions that players hate....
The stat block began life as a level 1 brute (100 XP) which I boosted to a level 9 minion brute (also 100 XP) once the PCs hit level 6 or so. They can be quite nasty in waves if they get combat advantage and start handing out the dazed condition. Silly me: I should have made a dazed target become stunned if it was dazed again. 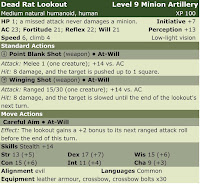 It made sense for the Dead Rats to have lookouts so I threw this stat block together fairly quickly to meet that need. At the beginning of a campaign, it would be a level 1 artillery but, now that the PCs are level 10, building it as a minion makes more sense.

And, once again, I was amazed at how much of a threat minion artillery creatures really are particularly with respect to their XP cost when building an encounter.

I had the lookouts placed up high with both cover and concealment and that allowed them to snipe without having to move. And, of course, without having to use their move action to move, they were able to use careful aim to get a boost to their attack rolls.

Frankly, for those who say that 4E is too easy for players, I would suggest that they reconsider that opinion when a big chunk of an encounter's XP budget is spent on minion artillery.

I also want to point out something I have been doing a lot with weapon-using artillery stat blocks: I turn the ranged weapon into a melee weapon to give the create a melee basic attack. Frankly, if I had my own editable 4E Character Builder, I would probably create a feat to allow PCs to do something similar. After all, we've all seen the Lord of the Rings movies and how effective Legolas is with a bow and arrow in melee combat!

The Dead Rats are, at their heart, a guild of wererats. In 1E, a wererat is a 3-hit dice monster. Similarly, there was also level 3 4E stat blocks for the wererat and that's where I started with this. Again, as noted in the two previous stat blocks, I kept the XP value but changed the standard monster into a higher level minion.

Wererats have regeneration in 4E so I modelled that with an ability - lycanthropic regeneration - to return to 1 hit point when slain with a successful saving throw, unless the attack is with a silvered weapon. My players are used to minions that make saving throws... and they also have an item that lets one of them create an aura 5 within which his and his allies attacks with implements or weapons are considered silvered.

Ultimately, these were less of a threat than the Dead Rat lookouts as a result! 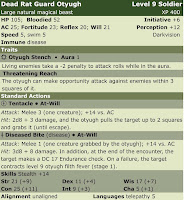 You cannot have D&D sewers without otyughs. I believe that is one of the fundamental rules of the game.

I had a fresh look at the otyugh in both 1E and 2E to see what I could discover afresh about them as 4E had reduced them to beasts with an Intelligence of 1. Not so in AD&D were their Intelligence ranged from 5-10 and, in 2E at least, they all possess short-ranged telepathy. Anyway, that should explain those small changed on the stat block.

The normal otyugh in 4E is level 7; I bumped this one up to level 9 which is still within the hit dice range in 1E (although I think it's actually within range for a neo-otyugh but close enough).

I will just comment on the damage on this stat block. A level 9 soldier is expected to deal an average 17 damage. In this case, average damage for tentacle is 12 while average damage for diseased bite is 22 (actually 21.5 but I will round up). The average for the two attacks is 17 damage and, as the attacks work in combination, it seemed fair plus it provides a strong incentive to escape the creature's grab.

I know later 4E stat blocks included an escape DC for monster grab attacks but I actually prefer the original 4E model where the player can choose either Athletics vs Fortitude or Acrobatics vs Reflex.

The leader of the Dead Rats in Neverwinter is Rsolk, a nasty piece of work who has become far too rat-like - with his twitching nose, furtive movements, and squeaky voice - for a human.

In battle he's clearly a skirmisher who also provides a mobility boost to his allies. That said, if I was going to build him again, I would also give him a bonus shift with his melee basic attacks as he needs a bit more mobility. 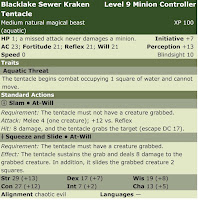 I'm a bit of a fan of the adventure The Lost Crown of Neverwinter which was season 6 of the D&D Encounters programme. The idea for the Blacklake sewer kraken - and even its tentacles as minions - is shamelessly stolen from that adventure.

This is a spoiler for those who haven't read or played in that adventure - and it's also spoiled in my session report that is not yet posted as at the time this post was written - but there is an encounter with the Dead Rats that results in one of the Dead Rats hitting a lever and essentially flushing the PCs and the remaining Dead Rats into another chamber that was once used by the once-notorious Kraken Society...

... and that's where the battle with the Dead Rats would continue further hampered by the tentacles of a devolved kraken.

I took it a step further and also included the devolved kraken as a monster plus four of its tentacles. And this is where I will insert the link to a description of the battle once I have finished writing it.

The highlight of the battle with the sewer kraken was its used of kraken's bite. Elite creatures are supposed to deal average damage equal to a standard monster of the same level (in this case, that would be 2 x 17 = 34) and sometimes I like to put all of that damage into a single attack which is what I did here.

Also, if you're going to run a similar battle, I recommend watching the most recent Conan film before you do so. The battle with the tentacled creature in that movie is a really good source of inspiration for fighting a kraken-like beast. 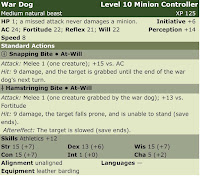 One of the many odd things about Gygaxian AD&D was the absolute lethality of household pets relative to the impotence of a lot of characters. When house cats were statted out in the Monster Manual II, IIRC, out group enjoyed mocking the designer who decided to make a house cat far more lethal in melee combat than a lot of 1st-level characters.

Slightly more believable was the war dog which appeared in the first Monster Manual but it was also lethal: a 2-hit dice monster with a bite attack that dealt 2d4 damage. In short, it was better in combat than most 1st-level fighters rolled up according to the 1E rules... and you could buy war dogs! Of course, then the only problem was getting your DM to agree that they were trained and would obey orders etc....

Reminiscences aside, I thought the Dead Rats needed some watch dogs and decided to go with the 1E war dog as inspiration so I started with a level 2 soldier. Bumping it up to a minion made it level 10 and I changed its primary role to controller purely to drop the AC by 2. At some point, I may even stat up a pack as a Huge swarm....