So far, I have made 22 or so posts to this blog outlining some ideas about a sandbox campaign set in the Silver Marches but, as I think I have already noted elsewhere, I don't do sandboxes.

I try but they don't "take" with me and I end up working on plot/metaplot ideas particularly once I start working out what NPCs to include. And the simply process of looking at the goals and motivations of an NPC then suggests further plot points... et voila, it's no longer a sandbox.

And that's what has happened with my plans for a Silver Marches sandbox campaign: it now has a plot and metaplot but it still has (hopefully) plenty of room for player agency.

However, the realities of real life make me realise that, at the age of 45, there are only a finite number of times I will play D&D or any other RPG for the rest of my life. As I look at this issue of "gaming mortality" I cannot help but think of applying the concept of the bucket list to this particular hobby, and my plot/metaplot ideas for what I am now calling the Silver Marches: The Winter Horde campaign draws from ideas taken from items on my gaming bucket list. The cover of Dragon 429 included this marvellous piece of art by one of my favourite D&D artists, Jesper Ejsing, depicting King Obould of Dark Arrow Keep in combat with a frost titan. I love this even if I cannot explain why (beyond simply loving Jesper's work). Looking at it made me think of the classic G1-3 Against the Giants series - G1 Steading of the Hill Giant Chief, G2 Glacial Rift of the Frost Giant Jarl, and G3 Hall of the Fire Giant King - which I have never run properly as part of a campaign. (I did run the first two as standalone adventures in 2E but they really showed how crappy AD&D was when you were no longer filled with child-like glee.)

So, reading the accompanying article, History Check: Dark Arrow Keep, and reminding myself how perfect the Silver Marches is as a setting for the classic G1-3 Against the Giants series, I decided to make them a key part of this campaign. However, there are a couple of changes I should note:

1. I have lots of hill giant and frost giant miniatures, but only a single fire titan miniature. I'll ditch the third adventure purely for that reason... plus I think three fairly similar adventures in a row is just a bit too much.
2. Giants in 4E are Paragon Tier monsters. I will run them instead as having the same number of levels as their 1E hit dice. This will reduce the hill giants to level 8 brutes and the frost giants to level 10 brutes. If I include stone giants, they will be level 9 artillery and fire giants will be level 11 soldiers.

So that's a fairly major item crossed off my gaming bucket list. And when I get around to writing an introduction for the second part of this campaign, Silver Marches: The Demon Weave, I'll be crossing off another major item.

Before I get to the synopsis, I should mention that this campaign is going to be run for my wife and family who have no experience with tabletop RPGs or even boardgames. They have played the Warcraft III clone DotA and they have played cards: that's it.

As a result, I feel the inclusion of a plot is fairly necessary and it's pretty simple. It's also more about the illusion of choice rather than a true sandbox: anyone who has played D&D before will spot the railroad before they sit down! And it also involves fairly simple monsters: orcs, ogres, and giants, with a dragon or two simply to invoke the name of the game.

With those comments out of the way, here's my rough synopsis for the campaign:

To make this work, I've decided that I need to really heavily on visual and kinesthetic elements to bring the story side to life. Beyond the heavy use of miniatures, I'll also be using a Paizo flip-mat - the one depicting the dungeon in their introductory adventure Crypt of the Everflame - as part of the effort to try and bring the game to life for these players who only known fantasy games from MMORPGs.

Actually, that's also why I decided to go with 4E. I know a lot of the criticism of 4E is that it is too much like a MMORPG: I don't know if the criticism is true, but I am hoping there are enough parallels that these new players enjoy playing D&D! :)

I've also decided to make this first adventure stand largely separately from the campaign's plot... but to tie into the plot for the Paragon Tier conclusion I have planned if the players end up liking the game. In the first instance I am doing this to provide some variety but, if we do continue the campaign, I am rather hopeful that the players enjoy the "big reveal" when they realise their first adventure directly relates to what happens 10 or so character levels later.

The basic plot of this adventure is that this is a tomb of a Banite paladin slain in the Banedeath by Cyricists after the Time of Troubles. A group of Banite hobgoblins have been led by visions from the Black Lord to find this tomb and raise this paladin to unlife... only to find that he is already a death knight. Now, while that part doesn't tie into the second part of the campaign, there will be slavers present that are allied with the drow - a drow will also be present - and they will be particularly interested in spellcasters for reasons that will not be revealed unless and until the campaign is continued in Silver Marches: The Demon Weave....

Menace of the Icy Spire
Levels 3-5 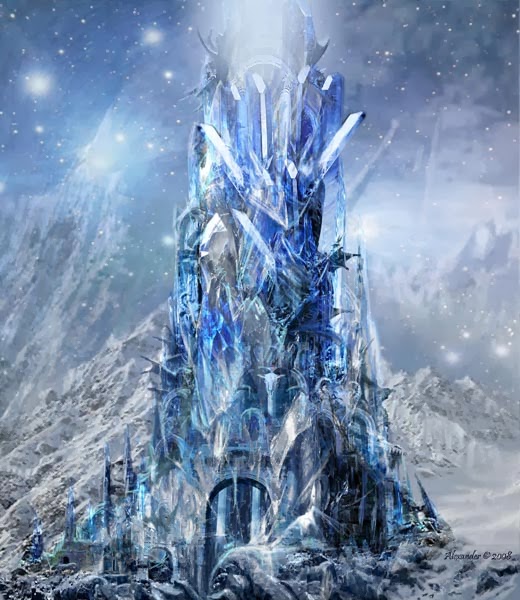 And now we get to Silver Marches: The Winter Horde proper....

The previous adventure - and, indeed, the campaign itself - begins at the very beginning of spring. However, after some initial signs that spring had arrived, winter has returned with a vengeance.

Something the PCs have done in the previous adventure - one of the things I still have to work on but it could be as simple as rescuing someone important from the slavers - has brought them to the attention of Silverymoon's leadership. They are asked to investigate the ruins of Rauvinwatch Keep which have been subsumed by a mysterious spire of ice.

The reason for hiring the PCs is that the unnatural winter has caused Silverymoon to withdraw its standing army, the Knights in Silver aka the Argent Legion, closer to Silverymoon itself because of rumours of orcs, ogres, giants, and also trolls from the Evermoors.

Anyway, this is a fairly simply adventure involving a mad female eladrin cleric or invoker of Auril who is angry with Silverymoon and has decided to bring winter to the city's doorstep. However, when the PCs end the threat posed by the eladrin they soon realise that this is but part of a larger problem leading them to... 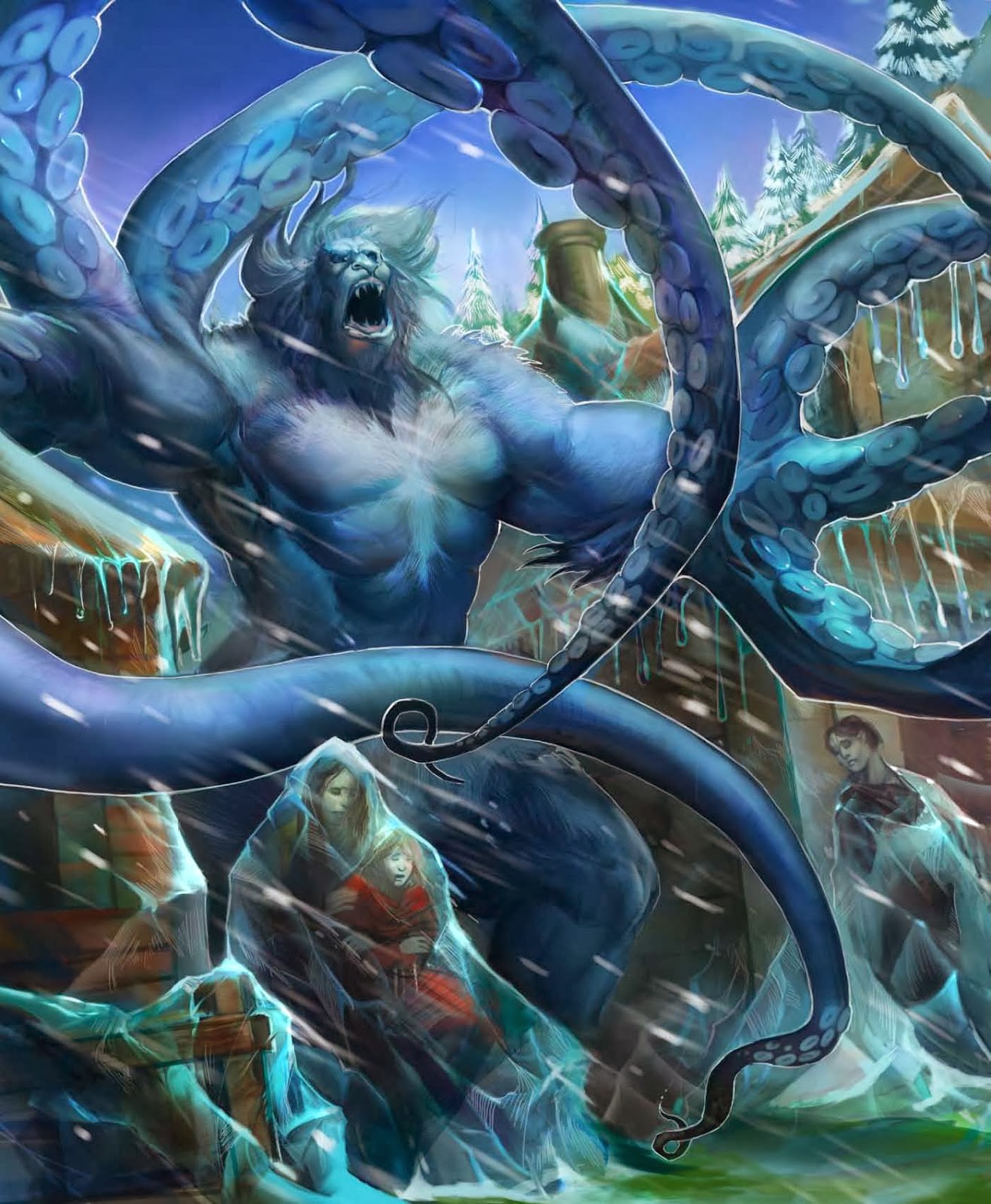 ... the village of Quaervarr where the entire village is trapped under ice and, at the centre of the village, sits a creature of ancient elemental evil, an aspect of Cyronax. A cult of orcs serves his every whim.

In the process of (hopefully) freeing the village from its icy immurement, the PCs will discover that the aspect of Cryonax should rightly be imprisoned by the primal magic of the ancestor mounds of the Uthgardt barbarians.

Whether following that lead or a further quest or mission from Silverymoon, the PCs head deeper into the Glimmerwood to solve the mystery of the...

(Edit: When I was first looking at Quaervarr as a location for the sandbox version of this campaign, it was with a view to setting a revised/adapted version of Crucible of Freya there. I think I would still like to do this and make the Crucible of Freya into a relic of Chauntea or Mielikki that would have protected the village from the unnatural winter but was stolen by drow who plan to use it to fuel the Demon Weave. That basic idea could still work as laid out in that earlier post.)

The Corruption of Beorunna's Well
Levels 7-9

... which has been corrupted because of the return of the nalfeshnee Zukothoth who was revealed in FR5 The Savage Frontier to have met his end in this same location centuries ago in battle with an Uthgardt shaman.

The followers of Auril have used lore provided by the drow to summon Zukothoth and Zukothoth has used his connection with this location to perform abyssal rituals to corrupt the ancestor mounds and free the aspect of Cyronax and unleash an unnatural winter across the Silver Marches.

However, in the course of ending the threat posed by Zukothoth, the PCs discover that anothe created has been freed: Gurt...

Lord of the Pale Giants
Levels 9-11 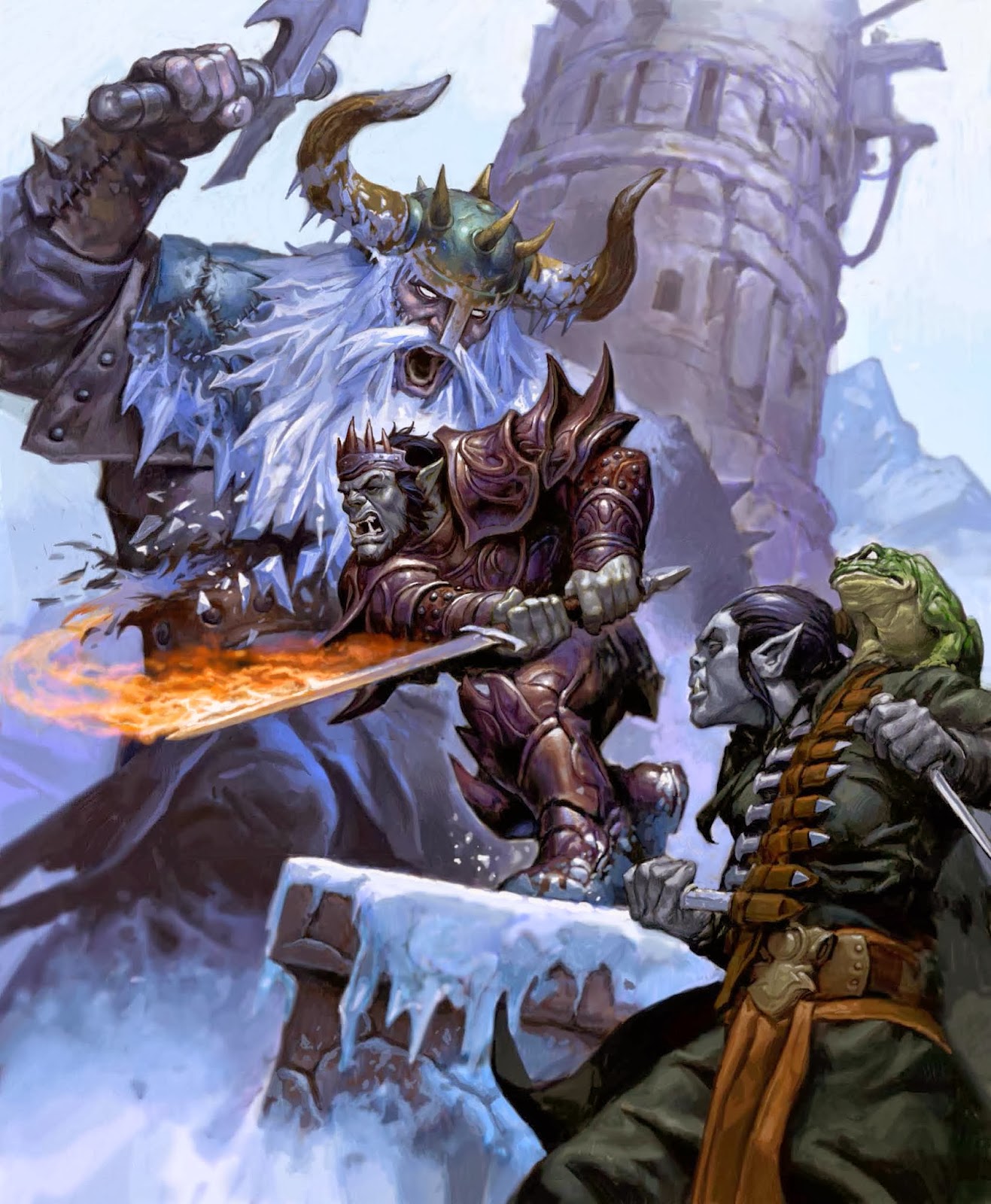 .. who was one of the mightiest foes defeated by Uthgar but also the one that ended Uthgar's mortal life (I think: I better check that).

While the followers of Auril believe that Gurt is the Frostmaiden's champion - and, in many ways, he is - this is all part of Lolth's real plan. She wants to foment war between Auril and Gruumsh-who-was-Talos because it will weaken Auril greatly leaving her vulnerable to the plan of the Queen of Spiders to seize Auril's crown as the Queen of Air and Darkness of the Feywild.

Metaplot aside, Gurt has rallied the hill giants and frost giants of the North and has also appealed to the orcs of Dark Arrows Keep who had grown tired of how the unbroken line of Oboulds had forced civilisation on the orcs. But now the Winter Horde begins to form ready to march south and sweep all before it...

... unless, of course, the PCs can return Obould to his throne. The short version is this: Obould's flaming sword has been taken by the hill giants back to the steading of their most powerful chieftain (and that's my excuse for running my own version of G1 Steading of the Hill Giant Chief). While Obould and his forces take the fight to the traitor orcs and their giant masters, the PCs travel to my updated version of G2 Glacial Rift of the Frost Giant Jarl and there beard Gurt in his new lair and discover that there was something far sinister behind this entire plot than simply Auril seeking to gain power at the expense of Gruumsh... 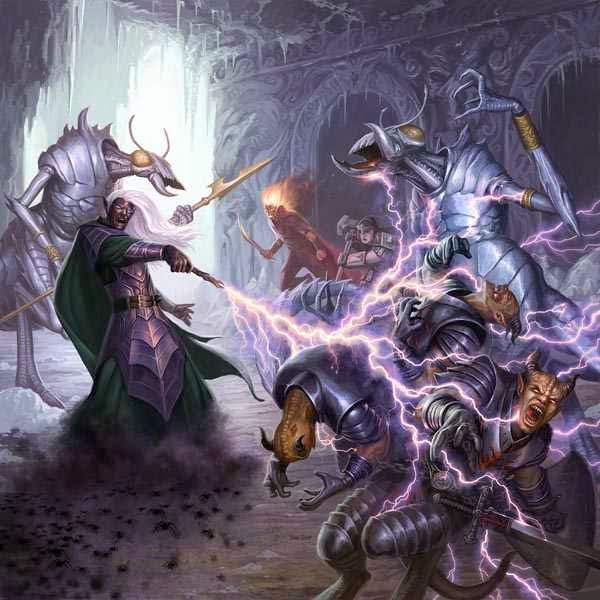 ... and that something is the drow.

But more about that when I post about Menzoberranzan: The Demon Weave.

Suffice to say, it's heavily inspired by the Rise of the Underdark storyline... but I want to draw on D1 Descent into the Depths of the Earth, D2 Shrine of the Kuo-Toa, and D3 Vault of the Drow (albeit set in Menzoberranzan) and another large chunk will be removed from my gaming bucket list.

Anyway, this is just a rough draft of the campaign to give me something to work with. Let's see if I can make it work....