Knights of the North - NPC: Manshoon, The Ageless One 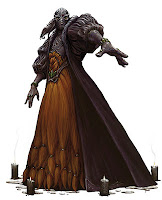 Key Traits: ambitious, ruthless
Goal: regain the power he had, rebuild the Zhentarim
Motivation: bad childhood
Fears: beholders seem too powerful, he feels out-of-his-depth in this post-Spellplague age
Weaknesses: none

This cruel, calculating man heads the Zhentarim; its power and success are largely clue to his efforts, and its collective control of Zhentil Keep, the Citadel of the Raven (and through it, dominance over Thar and the cities of the Moonsea'’s northern coast), Darkhold (and through it, maintenance of the shortest overland trade route between the Inner Sea and Waterdeep) have made him very rich.

Manshoon, a noble of Zhentil Keep, slew his older brother Asmuth and seized control of the city's governing councils by skillful intrigue, staunch allies (such as Lord Chess, a lifelong friend), and the aid of that faction of the priesthood of Bane controlled by Fzoul Chembryl and of the beholder Xantriph. Manshoon’'s own alliances with dark nagas, and his manipulations of the Cult of the Dragon, increased his influence and bought him the time necessary to build his personal mastery of the magical arts without allowing stronger rivals to assume control of the city until he was ready to take it.

Take it he has, and has flourished; his spell library is thought to be the equal of Khelben Arunsun’'s, and his arsenal of magical devices and weapons the largest held by a single mage anywhere in the Realms (although it is scattered, hidden, and guarded by spells and monsters). He is known to possess a staff of the magi and wear black robes of the archmagi, to wear a ring of spell storing and a ring of wizardry (that doubles fourth and fifth level spells), and is quite content to flee danger.

Many have tried to kill him, and none have succeeded; he is careful, never lets his temper master his reason, and is always alert. He seems an unbeatable foe; others face danger to do his bidding, but he's “never there.”

This is the easiest goal to achieve.

Basically, Zhent agents are sent to Phlan to steal every single book in Mantor's Library. Manshoon possesses a ritual that will allow him to read the books very quickly.

There will be a spell-battle over Phlan and Manshoon will defeat the mage of Denlor's Tower and "take his stuff". Other Zhent agents will be on the lookout for spellbooks and ritual scrolls.

3. I need more power - specifically the ability to clone myself because I have too many enemies.

Between Mantor's Library and Denlor's Tower, significant research had been done into the lost empire of the spell weavers. One of its ruins - a silver pyramid - sometimes arises in the Stojanow River and causes problems for Phlan.

More importantly, there is a major spellweaver ruin beneath the Glacier of the Silver Blades. That will eventually become Manshoon's new base. (It is otherwise based on the dungeon in Dungeon 130 - Secrets of the Soul Pillars.)

4. I need the Zhentarim to be stronger.

If the Hammer of Vorbyx is recovered, the Zhents can unite the orcs and ogres of Thar into a single mighty horde, provided they control the wielder of the Hammer.

5. I need to get rid of the Cyricists and replace them with Banites. Those Cyricists are nutbags!

This won't be easy because the Cyricists are entrenched plus their Cyric-granted madness makes them preternaturally paranoid. The Banites will have to be manipulated very carefully... but the beholders may also share this goal.

Sketching Out An Adventure Path

Based on these expanded goals, I think the final adventure (levels 9-11) will take place on and in the Glacier of the Silver Blades while the penultimate adventure (levels 7-9) will take place in the Ruins of the Raven as the Citadel of the Raven is now known. This should include hill giants and ogres and, most importantly of all, at least one beholder.

An adventure involving the orcs and ogres of Thar and the Hammer of Vorbyx - in other words, a rip-off of 3.5E's Sons of Gruumsh - is likely to be the third adventure while the Blade of Lathander than I have already sketched out fills the first adventure slot (levels 1-3) nicely.

Now all I have to do is figure out a second adventure for levels 3-5. Do I go with the pirates of the Moonsea or an urban sandbox based on a siege of Phlan combined with Speaker in Dreams? The latter is a Banite plot sponsored by the Banites of Mulmaster with elements of the Red Hand of Doom as it is the Red Claw goblins of Thar who are laying siege to Phlan.

The natural climax of this series of adventures is a battle with the clone of Manshoon in the depths of an ancient spellweaver fortress. That's a pretty good visual. Also, Manshoon's defeat is a very significant achievement for the PCs who are the new Knights of the North.

What Else To Include?


I want to include frost giants. The Glacier of the Silver Blades is the natural location for them. I would like to include drow but nothing really springs to mind. I suppose they could be competing with the Zhents for the Hammer of Vorbyx but that feels a trifle forced.

Should I include Tyranthraxus? Perhaps he possesses the Lord Protector during the siege by the Red Claw?

Email ThisBlogThis!Share to TwitterShare to FacebookShare to Pinterest
Labels: Knights of the North, Manshoon, The Return of Manshoon, Zhent, Zhentarim