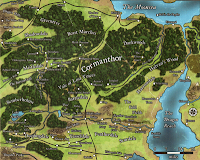 It seems I am on a drow kick.

The drow of Maerymidra are seeking to awaken the quiscient Moander beneath Nightwatch because an awakened Moander has the power to corrupt the mythal protecting Myth Drannor.

The drow plan to corrupt the mythal so that it becomes a thing of darkness thus allowing them to take the city of Myth Drannor for themselves.

The campaign begins with cultists of Moander shattering the Standing Stone. This becomes a signal to Eldreth Veluuthra eladrin and elves, under the leadership of the moonblade-wielding eladrin head of the Starym house, to commence a new campaign against the non-elves of Cormanthor.

There also needs to be a strong Feywild component or, more specifically, a Feydark component.


The Eldreth Veluuthra and the drow are able to move about the forests with seeming impunity. This is because they have access to the network of portals controlled by the fomorian King of Portals.


Using my preferred five adventure format, the fourth adventure is dealing with the drow outpost and the weakened aspect of Moander in Darkwatch while the fifth adventures involves travel into the Feydark to confront the King of Portals and destroy his network of portals (something that the gauntlets of Moander have the power to do). The third adventure could be about ending the Eldreth Veluuthra threat, which would mean confronting House Starym including its moonblade-wielding house head.


I just need to think about the first two adventures some more.