Fimbulwinter - NPCs: Cult of the Dragon

Cult of the Dragon 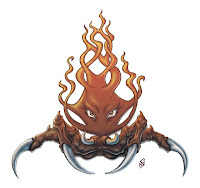 Why is  the Cult of the Dragon in the Moonsea North?


A cell of the Cult came to Phlan - specifically to (name)'s Library - to research dragons in this region. The Moonsea is known as the Sea of Dragons. They decided to focus their efforts on the Twilight Marsh which is reputedly ruled by a black dragon suzerain whose numerous offspring populate the marsh.

She sees herself as Beshaba's instrument. Phlan has thrown off its bad luck and misfortune and now, once more, it thrives again. This is wrong. This is an affront to Beshaba. She has joined the Cult of the Dragon, in part, because a controlled dracolich might possess the power to undo Phlan's rebuilding and restoration.

Email ThisBlogThis!Share to TwitterShare to FacebookShare to Pinterest
Labels: Cult of the Dragon, Fimbulwinter, NPC