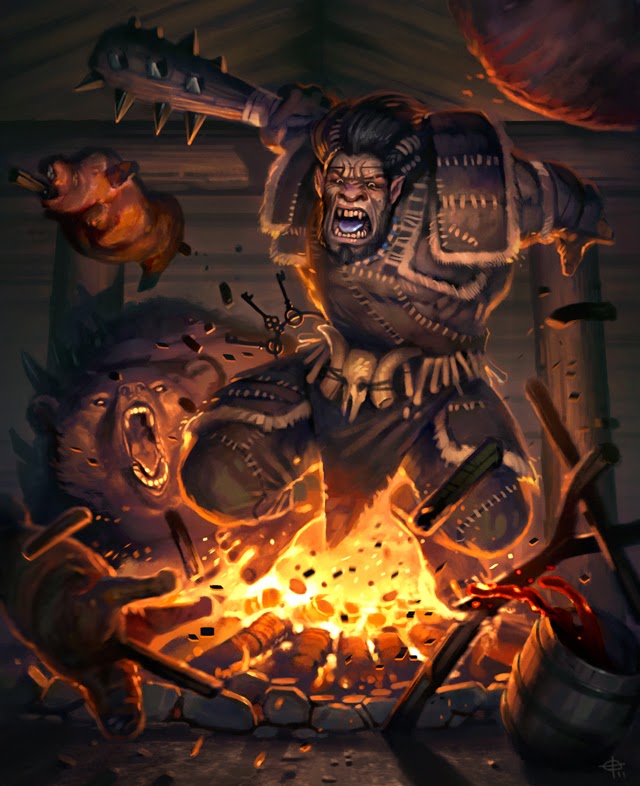 I confess that I am not a fan of AD&D, particularly of 1E. And despite that, AD&D has a lot of influences on my 4E gaming largely because my first experiences with RPGs were largely AD&D (although SPI's rather good DragonQuest played a significant role for a while).

Even though I am not a fan of some of the earliest adventures - aka modules - I still see certain potential in them and, having read them over and over again many times in the past 30+ years, they're firmly fixed in my memory and, when I need to ad lib an encounter or even an adventure, they're what I turn to automatically.

G1 Steading of the Hill Giant Chief is one of those adventures and I have just an opportunity to run a it in the form of, effectively a single encounter but that's the subject of <another post>. Here are the two stat blocks I used. 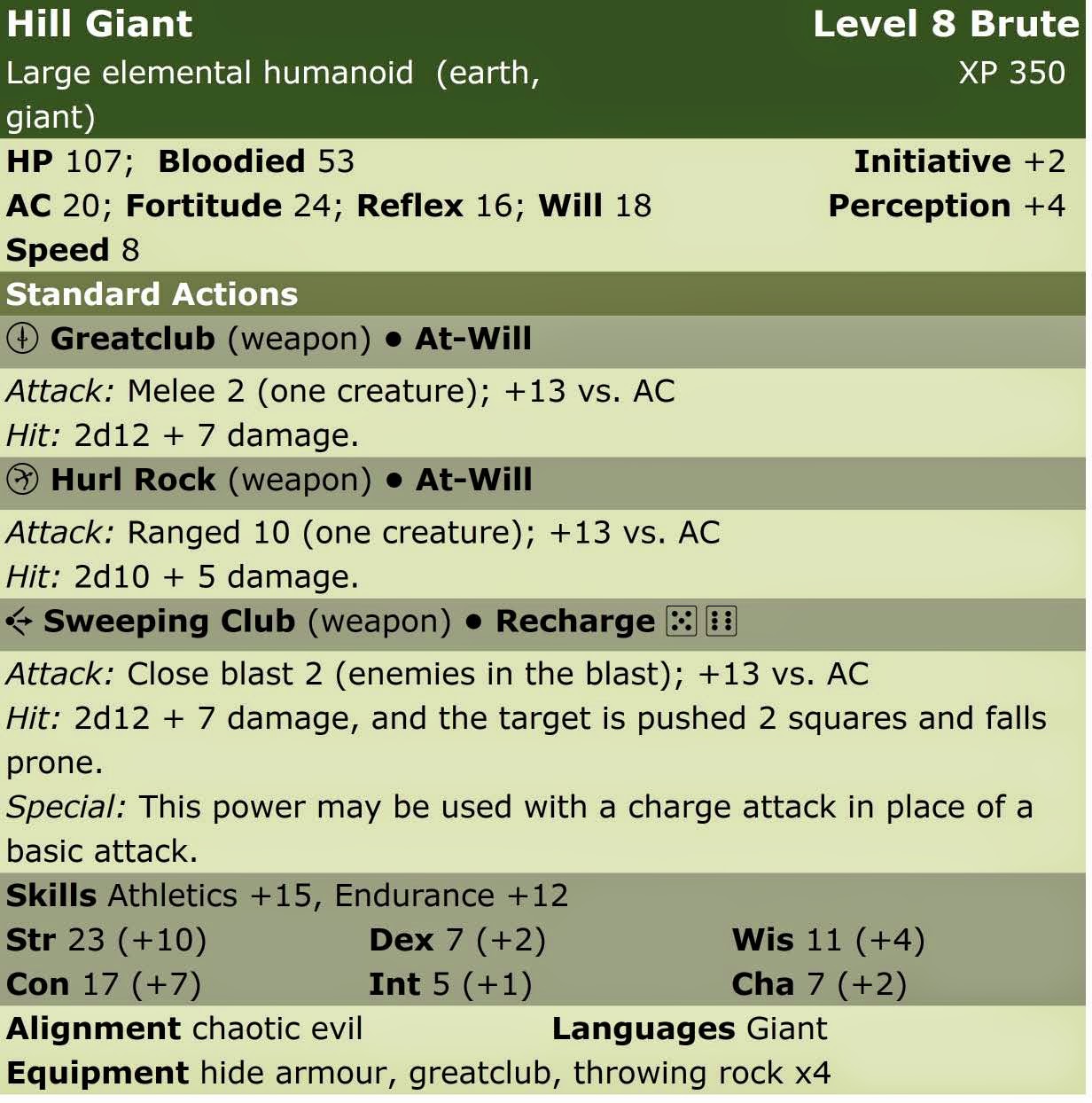 I imagine most 4E DMs are looking at this stat block and wondering why my hill giant is only level 8 when the official version is around level 13 or so.

The primary reason is this and it relates to the way AD&D informs my approach to D&D: I like my 4E monsters to have the same level as their AD&D hit dice, more or less. And hill giants in 1E had only 8 dice (and 1-2 bonus hit points, IIRC).

The secondary reason is that I am really only interested in running Heroic Tier - and maybe early Paragon Tier - games. My players don't have the endurance for longer games and I still want to use the full palette of monsters, as it were. Dropping their levels to match their 1E hit dice allows me to do that.

As a brute, the hill giant is pretty simple but I tend to think the sweeping club may be superfluous. I would have been better off putting a push or prone rider on the greatclub power and making the stat block that little bit smaller. That said, sweeping club is appropriate... and quite effective. It definitely makes my hill giant feel like a giant when it smacks a PC a couple of squares away.

This charming fellow's picture appears at the top of this post.
While I could have simply gone with an elite version of the normal hill giant and left Nosnra as a brute, I wanted something different for him so that he came across in the course of the battle as something more than just a hard-hitting brute.
My first thought inspired by the 4E version of Steading in Dungeon 197 was to give him a giant crossbow and let him use that as a melee weapon but otherwise make him artillery. However, that doesn't match the picture above, nor does it match the miniature I have that basically matches that picture.
Clearly he isn't a soldier and I didn't want something as complicated as a controller even if he is brighter than the average hill giant. So that left skirmisher and I decided to start with the move and attack everyone ability that a marilith has. However, with the marilith, her movement is a shift so she does not provoke opportunity attacks. That didn't feel like a giant to me, so Nosnra moves and provokes opportunity attacks as normal BUT, in doing so, he also has the potential to really boost his damage output.

That skirmishing-style attack then alternates - thanks to the recharge mechanic - with basically a double-damage version of his basic attack. As an elite, Nosnra should be able to attack twice. As I have done with a couple of elite (and solo) monsters in the past, I decided to give him a single attack that would allow him to do double damage instead.

But the really interesting part of Nosnra's stat block for me is the way his two traits work together. I think this is the first time I have seen a leader do more damage, and allow others to do more damage, when he MISSES rather than when he HITS. In some ways, it feels like a monster version of the lazylord: Nosnra can suck in combat and those around him can do better because of it. And considering how high a couple of my PCs' armour classes are, that bonus came to be quite large at one point in the combat.

Anyway, it's a different way for me of looking at a leader-like ability but on the rare chance that anyone else uses this, please do comment on how it went. My own commentary can be found <link to updated in the next couple of days>.