The Nashers played an important role in my Neverwinter: Year of the Ageless One campaign back in 2012 when we first began. (It's been a long haul to get as far as we have!)

I had them as an amoral counterpart to the Sons of Alagondar, with the Sons representing those who wanted a true heir of the last king/lord Nasher Alagondar to rule the city - and considered Lord Neverember nothing but a pretender - while the Nashers were claiming that they were, indeed, the legitimate heirs of Nasher Alagondar and thus should rule Neverwinter.

The Nashers had also attracted quite a following in Blacklake District in part because they were relatively wealthy and ran the district's only abattoir.  They were also loansharks and thugs.

The reason they played an important role is that the best (and first) skill challenge that I ever ran involved a scene where the Nashers and the PCs were competing to sway a crowd to their side and the PCs won. The result was great but, as a DM, I was simply more happy that I was able to get a skill challenge to work!

Anyway, on the off chance that someone is still running 4E and may get some use from their stat blocks, there they are.

The oldest of the four brothers and definitely their leader, the charismatic demagogue Andorn was, in the course of the skill challenge, the one whom the PCs were really competing with. However, he was no match for the thaneborn barbarian Griemolt whose outstanding rolls and good roleplaying - coupled with the voice amplification provided by the bard Aelar (as Aelar had an at-will thunder power, I allowed him to use this to boost Griemolt's voice with a successful Arcana check) - won the crowd over in very short order.

All that was left to Andorn was to order his brothers to kill these "usurpers" but he played a negligible role in the ensuing combat as Griemolt killed him in the first round. Things would have ended very differently if Griemolt et al had failed to win the crowd to their side....

In the picture above, Andorn is the first on the left. 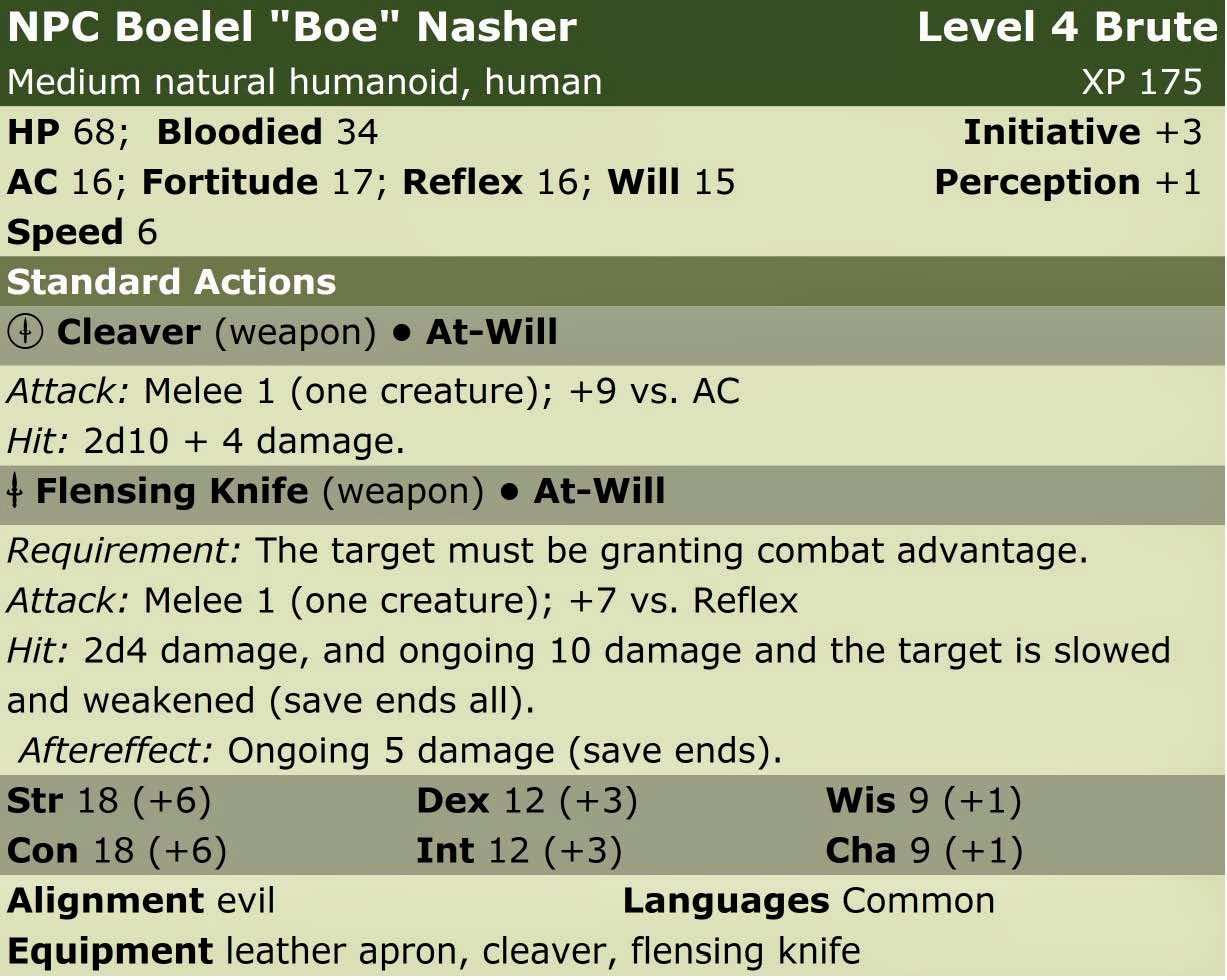 I think my favourite 4E monster type is the brute. They're simple to design and they're satisfying in play. I like combination of low AC (the PCs almost always hit...), high hit points (... but the brute keeps fighting...), and high damage (... and the players are scared).

In the combat that followed, Boelel did something that I think has only happened two times in this campaign: he dropped the dwarf fighter to 0 hit points. I enjoyed that.

Boelel appears on the far right of the picture above.

Darraudan was there for the PCs to hate. In keeping with his chaotic evil alignment, he was the one the other residents of Blacklake complained about and was the casus belli, so to speak, for the PCs' confrontation with the Nashers.

He was fairly effective in combat and his quick feint worked fairly well to set up decent damage.

Story-wise, my plan was actually to have this psychopathic murderer return as a higher level undead mohrg but the PCs chose to take the unconscious Darraudan to be executed and he was beheaded. I didn't think a headless mohrg made that much sense.... However, I still have hopes of running another group through Neverwinter and, if I do, the defeated Darraundan is definitely going to come back!

He's the second from the left in the picture above. 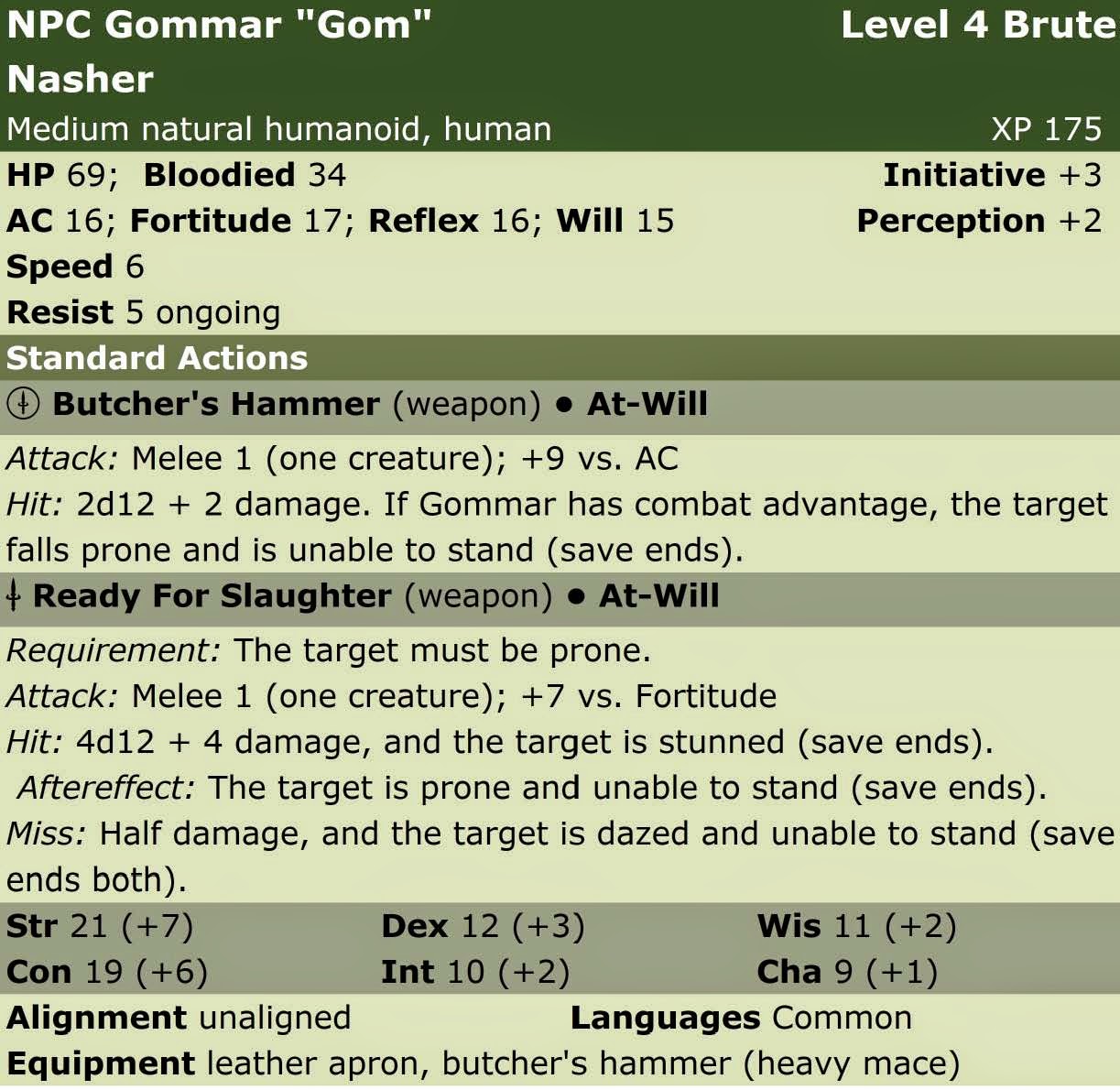 My predilection for brutes appears once more.

While Andorn may have dropped the PC dwarf fighter, it was Gommar who did the damage in the first instance. Oh yes, I enjoyed unleashing this brute against the PCs. One of the things I like about both Andorn and Gommar is that you can see their pictures and imagine exactly what they do in the course of their butchery business, and then the stat block reflects the way that would translate into a fighting style. That's something I don't you can do in 5E.

Obviously, Gommar is the second from the right waving a butcher's hammer above his head.

A Note on Formatting


I don't know what goes wrong with Blogger so often. I cannot put the pictures where I want them to go, nor can I get the fonts to stay constant through my posts. And, consistent with the saying "beggars can't be chooser" I cannot really complain as this is a free product. Nevertheless, it is still annoying....
Posted by Scrivener of Doom at 23:32

Email ThisBlogThis!Share to TwitterShare to FacebookShare to Pinterest
Labels: 4E, Neverwinter, Stat Block, Year of the Ageless One