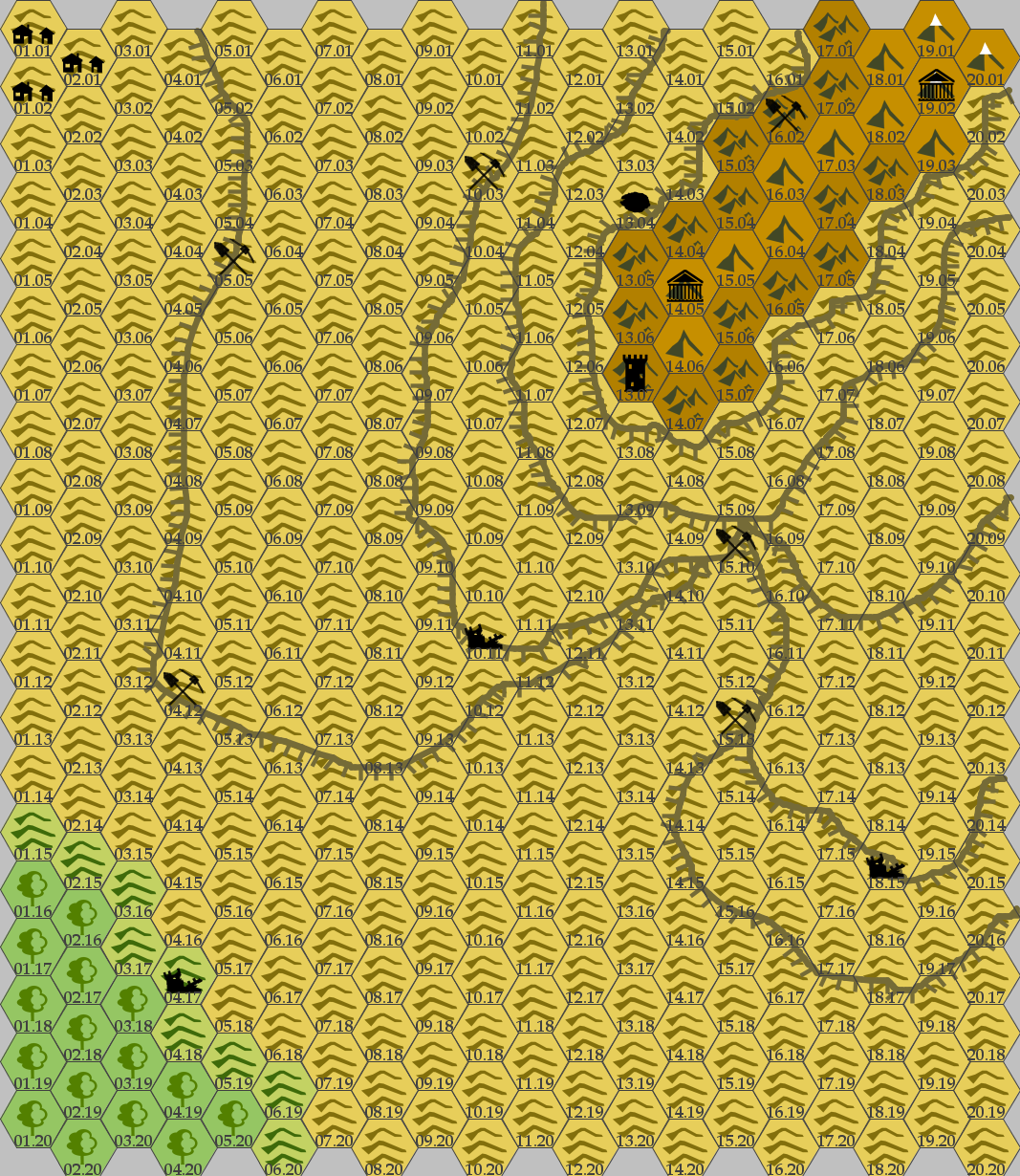 In my previous post, I mentioned that I had now begun a 5E campaign set in and around Phandalin which I am currently calling The Twilit Land: Rise of the Zhentarim but may eventually be called by its original name - Tyrant of the Twilit Land - after a few more sessions. And If I end up with a beholder as the BBEG, it may even become I, Tyrant.

For me, 5E is the third edition of AD&D, although I also recognise the influence of both 3.xE and 4E in its design, but it feels and plays like AD&D, IMO (and YMMV).

And in a conscious homage to that old school vibe that it gives me, the campaign has begun with the basic idea of having an updated version of the Caves of Chaos from B2 The Keep on the Borderlands as its centrepiece. However, besides the Caves of Chaos, and in keeping with the old school vibe, I wanted to throw in a hexcrawl with various locations that can be explored and/or avoided.

So that's all a long way of saying that I've prepared a hexcrawl map for the 10 mile x 10 mile area south and east of Phandalin and some other DMs may find it useful. The scale is 1/2 mile per hex. (It was created using Hexographer which is such an elegant programme that I wished I had used before.)

And for those who want a little bit of inspiration for the locations I have placed on the map, here are my rough notes which I will gradually expand as we play.

This also includes hexes 01.02 and 02.01. This is the village of Phandalin described in Lost Mine of Phandelver.

Although these mines are rich, nobody will go there because of the petrified miners around the entrance and through the entrance tunnel. Basilisks lair here… and grimlocks can also be found.

The grimlocks worship a petrified, coiled, purple dragon (aka deep dragon) that "resides" in the middle of a vast amphitheatre-like cavern. The petrified dragon has been rubbed smooth over the centuries by the hands of grimlocks devotees.

I think anyone reading this blog is familiar with the the Moathouse from T1 The Village of Hommlet or the execrable T1-4 The Temple of Elemental Evil. I think it's a fantastic little dungeon and I think it might work here. Otherwise, this could instead be the Place of the Unicorn or even The Shattered Circle.

(I note that the Place of the Unicorn should probably be northwest of Phandalin rather than south... but maybe the Spellplague caused it to shift? That statement, of course, is entirely tongue-in-cheek....)

This is the location nearest to Phandalin and thus the one most likely to be explored first. I've already set up a Zhent-sponsored goblin threat to Phandalin in my game so this set of mines is going to be ruled by a goblin "king" but there will also be a Zhentarim presence.

… and are notorious for bad luck so lots of small shrines to Beshaba can be found along the way. Failing to pay homage at these shrines - or, even worse, desecrating same, can result in the Maid of Misfortune visiting the unbeliever with disadvantage on all saving throws, attack rolls, or skill/ability checks, or even all three.

It would also be a good location to run 2E's Dungeon of Death (which includes mines), although that adventure is set in The North so would require a few changes to place names and background details. And for those running it using 5E, you would need to convert a few monsters including the nabassu demons.

I am probably just regurgitating some ideas I had for the Old Owl Well, but I want at least one "weird dungeon" location in this area and I am thinking these could be something like S4 The Lost Caverns of Tsojcanth.

Frankly, I should also take a fresh look at the wilderness portions of Lost Caverns and see if I can translate them to this hexcrawl map....

I want to take the basic idea of The Shattered Circle but have access to it be via a sinkhole or pit which resonates with weird whispers from the ancient past.

Ahhh, this is the orc-raised tower from the classic 3.5E adventure Sons of Gruumsh. Besides orcs - and orogs! - this adventure also conveniently includes Zhentarim which suits my purposes perfectly. It's one of my favourite adventures that I have yet to run and the maps are simply superb.

One of the few dungeon locations I used in that campaign was a lost temple of Amaunator that dated back to the Netherese era and still contained the clerics of that time, albeit as undead huecuvae (I am hoping that's the correct spelling of the plural of huecuva). The map was actually based on the dungeon in B3 Palace of the Silver Princess.

Anyway, I want to use it again. It's high up on a cliff top and accessible by a carefully hidden switchback path.

These are the Caves of Chaos from B2 The Keep on the Borderlands. They're supposed to be the focus of my new 5E game but I'm now not sure if the PCs will get there! :)

To support their activities in the area, and the eventually fitting out of the army they're raising, the Zhentarim have reopened some iron mines at this location and have pressed slave labour into doing the work. I don't have a published adventure to steal from at this point, but I may use the maps for the first section of the Mines of Tethyamar that appear in 3E's Lords of Darkness.

I want these to be active mines because the PCs have met a band of dwarven miners who were heading there... but I am also so very tempted to run 3E's Forge of Fury at this point, in large part because this campaign needs a dragon and there is a black dragon in Forge of Fury....

Alternatively, this could also be 4E's Orcs of Stonefang Pass....

This is from the DDi adventure of the same name.

This is based on the Lair Assault involving the temple of Shaundakul. However, it may now be the demesne of an ogre mage or three.

Basically, I want one location on this map to be up in the Sky. Temple of the Skygod is probably the best published fit, although I recall there is at least one published Dungeon adventure set in a cloud castle....
Posted by Scrivener of Doom at 23:43