The story of these kobolds has appeared in Dragon magazine - IIRC - and, of course, on the internet. As far as I can tell, it was an Old School attempt to make the weakest of the humanoid monsters into a credible threat by tactics which relied largely on DM fiat.

4E has provided the DM with a better toolset to try and make kobolds a threat - while still remaining "one hit wonders", so to speak - without simply resorting to DM fiat. While I do like a lot of the later kobold designs, as part of my desire to reduce the levels of my 4E monsters to better match their hit dice in 1E (or 2E in some cases), my basic kobold is a 1st-level minion lurker. 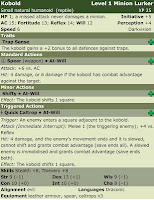 As you can see, it's a surprisingly long stat block for a monster that is only a minion largely due to the quick caltrop power. And while it is statted as a lurker, it could easily have been a skirmisher or even a controller and utilised the same stat block.

4E already established that a kobold can shift as a minor - rather than move - action and I wanted to combine that sort of quick movement with the flavour text surrouding kobolds that they are noted trapsmiths (and a standard version - as opposed to this minion version - of this stat block would probably be called a kobold trapsmith and I would simply add the encounter power for the trapsmith character theme from Into the Unknown: The Dungeon Survival Handbook).


With quick caltrop, even approaching a kobold becomes both annoying and dangerous, especially if the kobold is allied with a dragon and now the slowed or immobilised PC cannot simply run away. It also makes it difficult for the PC to strike at the kobold in melee whereas, on its turn, the kobold can dart in and out striking with combat advantage for extra damage.

I haven't playtested this stat block yet but I think it might have a Tucker's Kobold-like effect on teaching a new generation of players to respect the self-titled Sons of the Dragon.

(By the way, if you're wondering why the stat block includes green plus signs on the same line as the name of the power, it seems that there is yet another bug in Adventure Tools. Any time you add even a single power from another monster, this sign appears on all of your monster's powers. At least that is what has been happening for the past couple of days....)