For me, the best part of 4E is the ease with which a DM can make monsters while also capturing their flavour. It's an area where 4E is simply so much superior to the pre-3.xE versions of D&D which largely relied on the ability of the DM to vary his descriptions. After all, pre-3.xE most monsters only differed in terms of armour class, hit points and damage dealt; without a DM's off-the-cuff descriptions combat against a kobold or an ogre simply felt the same, more or less.

3.xE went a large way toward fixing that but, in the end, it became time consuming to make interesting stat blocks. 4E, however, got it right from the beginning and then perfected the maths after the Dark Sun Creature Catalogue and Monster Manual 3.

I've been meaning for a while to create more stat blocks to bring the levels of 4E monsters into line with their hit dice in 1E or 2E. As I've decided to stick to Heroic to early-Paragon games from now on, I needed, inter alia, giants of a more appropriate level. Of course, once your hill giant is reduced to an 8th-level brute, the other humanoids - such as orcs, ogres and trolls, also need to be reduced in level as well. I'll be posting these stat blocks as often as my internet connection allows but I wanted to first post my new stat block for the Aspect of Bane.

One of the best things about 3.5E's Miniatures Handbook was that it introduced the concept of divine aspects - significantly (!!!) lower CR versions of divine avatars that were also easy to run. The aspect of Bane did not feature in the Miniatures Handbook but the miniature itself was released for sale and so Wizards of the Coast created a stat block for it that was printed on the card that came with the miniature.

The aspect of Bane was a CR 11 encounter and so I decided to stat my 4E version at 11th-level as an elite controller. I had thought of making it a solo and also as a soldier but elite monsters can be more interesting as it's easier to include other monsters with them.

My plan is to use this stat block in my future Black Age of Bane campaign but I'm posting it now as I rather like the way it came out.

At the moment, the stat block includes the leader keyword although the aspect of Bane has no leader powers. I'll fix that after I have left it to "brew" for a while.

The stat block may be quite complicated to run although I think that if you grasp the essential theme it becomes intuitive.

Basically, as the aspect of a deity of tyranny, you don't want to fall prone near it - it wants you to bow before it! Besides the extra damage the aspect of Bane does against prone targets, to stand up from prone first requires a successful saving throw before a move action can be spent on the PC's next turn to allow the character to stand. (Of course, leaders generally have a way to grant saving throws at other times.)

The crushing fist of spite power was inspired by the spell of the same name from 3.xE's Book of Vile Darkness, althought it was actually more inspired by the accompanying illustration:

Of course, the crushing fist of spite evoked by the aspect of Bane is going to be a thing of darkness.
One last thing, here's a picture of the miniature that inspired this stat block: 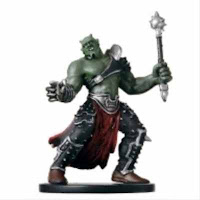 Unfortunately, the resolution is not particularly good... but I'm going to enjoy its presence at my table one day!
Posted by Scrivener of Doom at 19:23