Welcome to My Realms 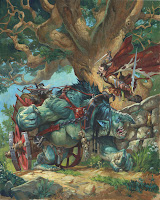 I'm a long-term Forgotten Realms fan who was originally disappointed with the post-Spellplague version of the Forgotten Realms. However, as someone who always DMs and who was growing frustrated with the inordinate amount of work involved with creating adventures and whatnot in 3.5E, the simplicity of monster and NPC creation caused me to have another look at 4E which was followed by an embrace of the 4E Realms so that my players and I could use the electronic tools.

Nearly two years later, I've become quite a fan of the 4E Realms but there are two things I really dislike:

1. The map for the 4E Realms was, without me being guilty of hyperbole, possibly the worst map for a RPG world published in the past decade or so. It's a disgrace. Inaccurate. Blurry. Lacking detail. Truly horrid. I often wonder whether the poor quality map is another reason so few seem to be embracing the 4E version of the Realms.

2. There is no place you can really go on the internet to discuss the 4E Realms without being buried under the enormous e-turds of various professional and semi-professional threadcrappers. I don't understand this. I don't like Dragonlance so I simply avoid those threads. Why can't those who dislike FR extend the same courtesy? (And that, obviously, is a rhetorical question.)

I've decided to start a blog about My Realms, hence the rather obvious title, primarily for my own enjoyment but also on the off chance that some other 4E FR fans may see it and, in due course, start sharing their thoughts and creations.

One of the reasons I have started this blog is that I am trying to come up with my "perfect" FR campaign. Of course, such a thing does not exist. However, these are the things I want to incorporate in one or more campaigns:


One of the reasons why I want to create the "perfect" FR campaign is that I suspect I may only have one more campaign in me as a DM. I'm at the point on my life personally and professionally - and also geographically! - where regular D&D gaming is getting to be impossible. I would love to go out with a proverbial bang, as it were, and finish a campaign using most or all of the ideas I have had swirling around in my head for a while.

As I write this updated post, it is May 2012 and I am finding that the idea of a campaign set in Elturgard involving a clash between that nation and the Zhent forces of Darkhold is the one that really appeals to me. Let's see if I can get it off the ground....

Map of the Forgotten Realms

When you look at the thumbnail version you may wonder, "How bad could it really be? It actually looks quite nice." However, it's when you try to actually use it for your games that the problems become apparent....