Creating the NPC
As my plans for the Black Age of Bane campaign require that followers of Bane represent one of the major groups of enemies, I want to introduce Banites into the very first adventure. The only thing is, it just doesn't seem right that a 1st-level cleric of Bane should be a BBEG even in an introductory adventure but this is where, for me, 4E really shines with its minion, standard, elite then solo system.
A "boss" Banite to me should be around 6th-level and an elite "monster". I like the idea of Banites being controllers so I'll run with a 6th-level elite controller as my BBEG. That means he is worth 500 XP. Looking at the XP for monsters table, a 1st-level solo monster is also worth 500 XP. With that as my logical underpinning, I will create this NPC as both as 6th-level elite controller and also a 1st-level solo controller. When the party first meets him he will be a 1st-level controller, probably supported by a squad of minion soldiers, but something that can be legitimately encountered when the PCs are still 1st-level.
I suspect that when (or if) the party meets him again when they are around 4th- or 5th-level that he wil still feel like a significant threat, albeit requiring some more significant allies that 1st-level minion soldiers to provide a meaningful encounter.
Describing the NPC
One of the WotC designers came up with a handy "stat block", as it were, for creating a shorthand description of an NPC and that's the format I've been using for a while.
However, first things first: I need a name. The 2E adventure Halls of the High King involves a group of evil Banites and is full of Ed Greenwood-created names that drip with FR flavour. I'm going to steal, in the nicest possible way, Thendulryn Dhravn. To give him his full name, he is Dreadmaster Thendulryn Dhravn of Bane, a male human cleric of the Black Lord.
Using the NPC stat block previously mentioned I note:
Key Traits: Thendulryn is cold, deliberate, domineering, haughty and ruthless (this is standard for all Banites, I think).

Goal: He seeks to learn more about the Black Age of Bane, revealed to him in his dreams by Bane's exarch, Fzoul Chembryl, and to usher in this Black Age while sitting at the Black Lord's left hand (and possibly even supplanting Fzoul from his position on Bane's right).
Motivation: The dreadmaster is a religious fanatic but he is also scarred by his experiences with the Zhentarim in his youth and particularly the chaos of the coming of the Cyricists. Basically, he is a perfectionist and only the tyranny of the Black Lord promises perfect order and perfection.

Fears: Thendulryn is terrified by two things: being buried alive (he is very claustrophobic) and falling. The threat of holding him over a dark pit or open grave can be enough to reduce him to a quivering mess.
Weaknesses:  His fears are a significant weakness, particularly for a dreadmaster of Bane, as his is overweening hubris. He believes he has been specially chosen by Bane's exarch for a special task that will herald the Black Age of Bane.
That's a start at least, although it is also horribly generic. However, it's enough to provide some ideas for the first adventure (and I can also see how he could play a role within the Sceptre Tower of Spellgard should I decide to run that adventure).
The more I think about it, the more I want to focus on his perfectionism combined with his fears and weakness. I can imagine that he has, inter alia, a pathological distaste for being dirty or for his chambers to be anything other than perfectly clean and well-organised. Such a man would definitely need servants to cater to these whims.


The Stat Block
One of my D&D joys until a few months ago was building monsters and NPCs using Wizards of the Coast's Monster Builder, one of its electronic tools accessible to DDi subscribers. Unfortunately it was too good to last: the last update created a range of new bugs that make it difficult to use and even more difficult to get a stat block in a usable format.
I've just spent more time compensating for the bugs than I did actually creating the stat block but here it is in .jpg format. Sadly, I can't print it in the nice MMIII-style format because one of the bugs causes the icons to corrupt when printing to PDF. I've had to convert to .rtf format and, from there, print to PDF and then convert to .jpg to get this file. (Of course, until that last update this wasn't an issue at all. Well done, Wizards of the Coast; you've succeeded once again in screwing up one of your electronic tools.) 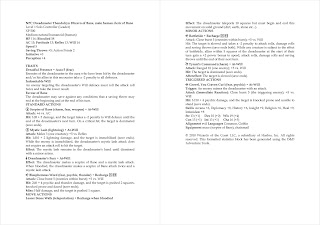 I've also statted up some sword fodder for him, mercenaries he has hired and trained to defend his person even at the cost of their own lives (probably due to some ritual fuelled hby is ability to dominate at will). 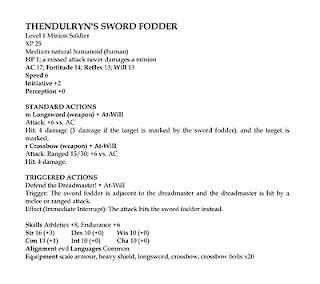