I have mentioned before that I am trying to reduce the level of 4E monsters to match the hit dice that they had in 1E, more or less. This also has a knock-on effect with other published 4E stat blocks, such as the Zhents that appeared in the Forgotten Realms Campaign Guide, because they're probably too powerful as rank-and-file members of that organisation.

As a result, I've prepared a number of my own Zhent stat blocks to better match the power level of my campaigns. 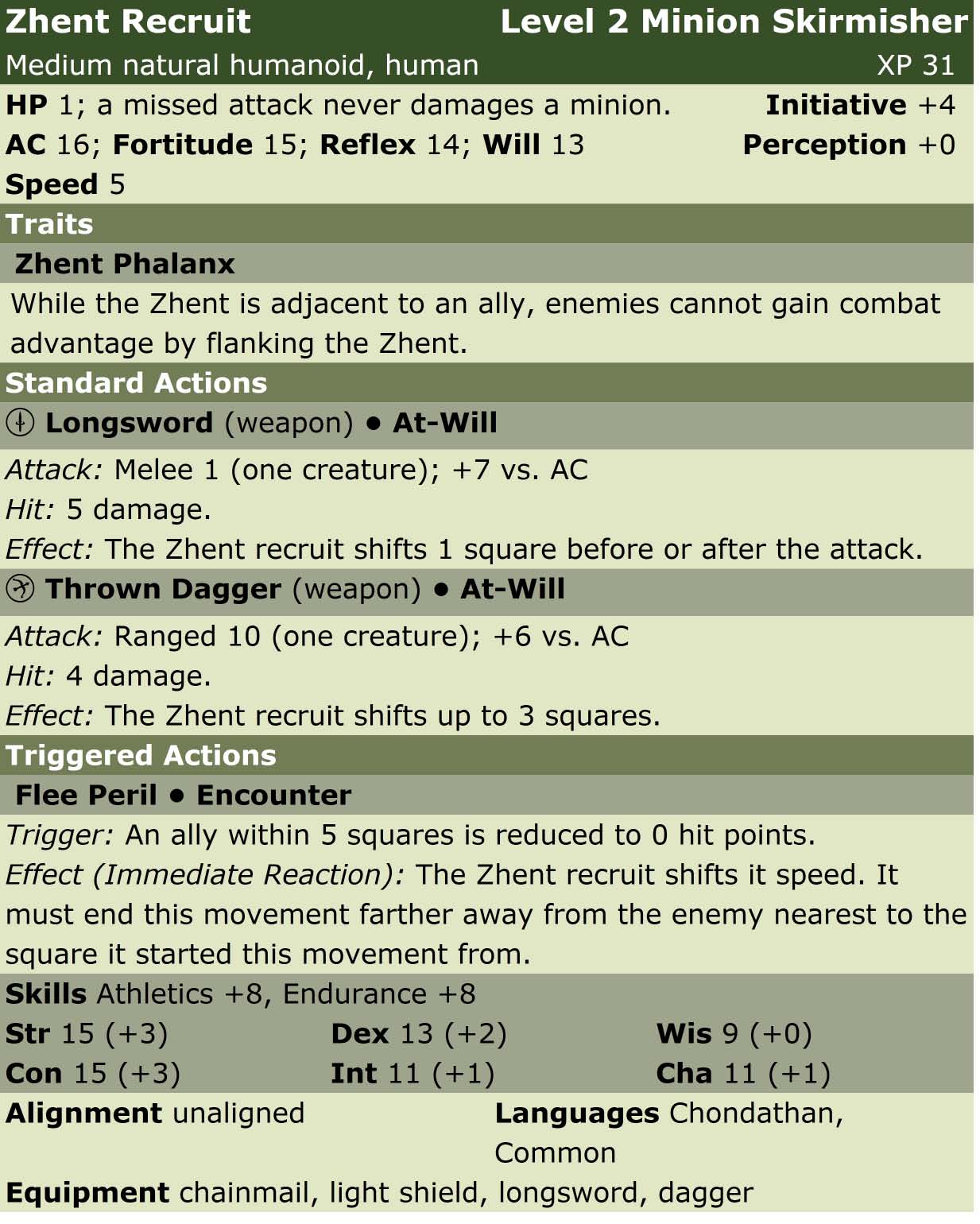 The Zhent recruit is likely to be the weakest Zhent that the party fights. The combination of the Unaligned alignment and the flee peril power, not to mention the fact that they are minions, is meant to suggest that they are not yet fully committed to the Zhent cause.

The Zhent mercenary is meant to represent a common Zhent soldier. It is based off the Zhent soldier that appears in the Forgotten Realms Campaign Guide but I have reduced its level and added a couple of powers that came from the Mercenary character theme.

Unlike the Zhent recruit, the Zhent mercenary is Evil. This is a hardened sellsword who will do whatever it takes under the Zhent banner.

The Zhent reaver was actually inspired by the Zhent Champion miniature. I had always thought of Zhents are being sword-and-shield soldiers but that miniature has a Zhent wielding what is probably a bastard sword and no shield. Rather than creating a champion I decided to make it into something more akin to a barbarian. I also drew some inspiration - if not one or two of the powers - from the Reaver character theme.

The reaver's rampage power comes from the tanarukk entry in Monster Manual 3, and it is something that I also incorporated in my own version of the tanarukk posted on this blog.

Like the Zhent reaver, this stat block was inspired by a miniature, in this case the Zhent Cavalry figure. Rather than statting up the rider and mount separately, I decided to combine them into a single elite creature. I haven't playtested it yet to see if it works but it looks like it does.

The LFR adventure, QUES1-1 Black Cloaks & Bitter Rivalries, mentions that what I assume is the equivalent of a Zhent sergeant is actually called a jack.

(Power of Faerûn provided a detailed list of Zhentilar ranks for the 3.5E era which are not used in the post-Spellplague era. For the purpose of my campaign, I treat the modern Zhents as a shadow of the former Zhentarim with less precise organisation due to the strong Cyricist influence... but when the Banite influence returns, the structure of the Zhentarim including the old ranks will also be returning.)

I see the Zhent jack as a battle-hardened veteran who is both ruthless with the troops under his command (unabashed treachery) but also capable of seeing them through hard fighting (cf hold your guts in!). Again, the stat block has not yet been playtested but I think it will work well with a dozen or so Zhent recruits in particular. 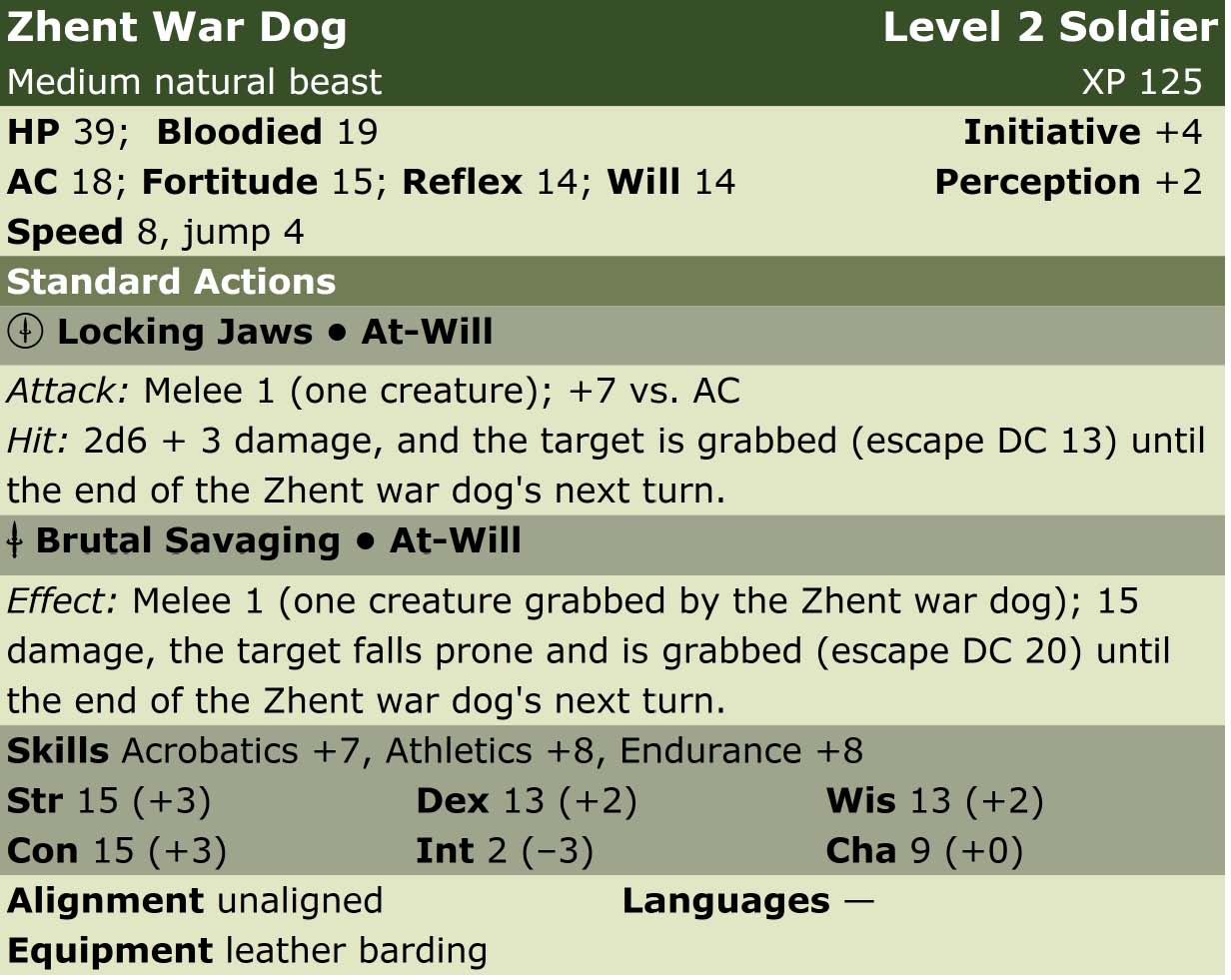 My final Zhent stat block for this post is for a Zhent war dog. This was also inspired by a miniature. What I thought was a War Dog miniature is actually a Hyena miniature: I would never have guessed!

Again, this stat block is unplaytested but it looks like it will do its job as a soldier and protect Zhent magelings etc....