A few weeks ago, I posted some thoughts about creating a megadungeon for the Forgotten Realms. It seems I rather disliked my own post because I also deleted it although I don't remember doing so.

I want to revisit this idea largely in the context of my planned Neverwinter: The Year of the Ageless One campaign but also because I think it has potential for a megadungeon that can be used for a variety of playstyles and RPG games and editions.

The core of the idea is Nuur Throth, the Great Door. This is the information I have gathered from a couple of sources about Nuur Throth:

Beneath the Sword Mountains on the western edge of the Northdark lies the vault of Nuur Throth. This place is one of the most powerful earth nodes known to exist. At the heart of this cavern is a twisted, spear-like craggy outcropping of black, dense iron ore that constitutes a Class 6 earth node.


Nuur Throth is linked to six similar nodes that extend in a rough line from Icewind Dale down to the Kryptgarden Forest. They are all at a consistent depth of 12 miles and relatively accessible from several Middledark sites, notably the duergar Deepkingdom. These other nodes range in strength from Class 2 to Class 5. A spellcaster using the node door spell can transport to any of these linked earth nodes, even if he has never visited the destination before.

The cavern of Nuur Throth is a strange place. Curtains of wizard fire dance constantly in the upper reaches, and circular groves of sussur trees surround weird, pockmarked stones that cover deep, black wells. Something terrible was once imprisoned here, but no one knows for sure what it might have been - or whether it is even gone.

Also, the sheer power of an earth node - 3.5E's Underdark spelt out the powers in some detail; I would probably add a lot to that - also provides a hook for all types of creatures to gather at the site of each node. Wizards - whether Red Wizards of Thay or Zhent war mages - would seek to tap its power, merchants - both of the surface and Underdark kind - would love the nodes as a means of moving scarce commodities, Lolth-worshipping drow following the Queen of Spiders' command to aid her in controlling the Weave might simply be seeking to tap the nodes' arcane might etc.... Also, if the nodes act as seals on the prisons of a primordial - most likely Ogremoch - then elemental/primordial cultists might seek out the nodes with a view to corrupting same so that the seals can be broken and the primordial freed.

So far I can think of three sites I want to link to the node network of Nuur Throth:

- The Seven-Pillared Hall of H2 Thunderspire Labyrinth (this site will also be part of the Northdark's Labyrinth) will contain an earth node that is used for trade (perhaps the wizards controlling the 'Hall also control a passel of portal drakes that can use the node to open portals to other places).

- The ruined city of the Sinister Spire from the 3.5E adventure The Sinister Spire will be a House Xorlarrin outpost where they experimented with the spellplague until the experiments got out of control. Now the Netherese are here trying to tap into the power of the earth node believing that it might aid them in raising Xinlenal.

- The dwarven dungeon of Southkrypt is located on the final node in the network. It is the location of a dwarven cult of Ogremoch plus their norker servitors. The dwarves have the stone-based character theme from Into the Unknown: Dungeon Survival Handbook. As noted in an earlier post, I also want to incorporate a lot of Orcs of Stonefang Pass in my Southkrypt dungeon, albeit with norkers (and dwarves) instead of orcs.

I only need three more sites and I have my megadungeon. :)

Oh, and this is my temporary name for this megadungeon:


The Chaos Cultists of Nuur Throth 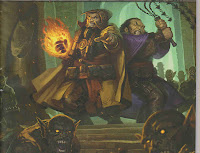