New Players in the 4E Realms

I live in the Philippines and my gaming group is in Oz. Due to some internet connection problems in my new house here I have not been able to get an internet-based game started yet but it is going to happen. However, I am also thinking that in a nation with around 60% unemployment (the real number as opposed to the government's lies) - and a family-in-law with an even higher unemployment rate! - that maybe I should also start a group here.

Everyone is familiar with World of Warcraft - they all play a pirated version called Dawn of the Ancients - so basic concepts of race, class and hit points won't need too much explaining. For once the complaints that 4E is like a MMORPG will be arguably working in my favour, except that I have no personal experience with playing MMORPGs.

Unfortunately, I need dice. I have almost everything I own on my laptop as PDF files and, while dice rolling programmes and apps are a dime-a-dozen, I think it's an important part of the tabletop experience that dice are rolled. Hopefully I can address this on a trip to Oz next month.

I also need a battlemat but that's simply a trip to one of the local hardware stores for a sheet of white board of some sort and a Stanley knife. I won't have miniatures but I can just use home-made counters from the art that WotC (and Paizo) has published.

(I am hoping on my next trip to Oz to ship all my RPG stuff and quite a few other things here. It might take a few months but it will be exciting to take delivery of it all here and then organise everything in the library/game room that is currently being built).

I suppose they're the practical, physical issues so now to the real meat of this post: system, world and adventure/campaign type.

4E is quite a complicated system but being able to present character sheets that have been prepared electronically and look rather professional is a big deal, IMO. Plus the character sheets are basically complete: there's not a lot more that a player needs to look up other than a list of conditions and what they mean.

Anyway, as I will be the one preparing the PCs - and probably focussing on simpler, Essentials-style characters - I can always assist if a player is having problems making a decision on what to do. Hopefully someone will be up to the challenge of playing a wizard because they really are the best controller as far as I can tell.

I think it's important for a first game of D&D to run it in a "normal" D&D world. I love Dark Sun but I can't imagine Athas being the sort of place to introduce new players and perhaps Eberron has too many non-standard fantasy tropes.
As it stands I think I will stick with the Forgotten Realms - and the less-detailed 4E version, at that - simply because it is a fairly standard fantasy world and I know it well. Plus I have so much material for FR games that it simply makes sense.

The other reason I want to go with the Forgotten Realms is that I think one of the perfect introductions to D&D is a delve into Undermountain. Check this out: 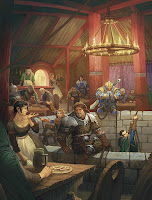 Something about this picture screams "adventure" and "D&D" to me.

It's the Yawning Portal tavern in Waterdeep and it shows adventures descending into the titular yawning portal for a foray into Undermountain. I think this picture really shows some of the tropes I want my new players to experience.

I've also got the adventure Halls of Undermountain to run, plus a DDi adventure, What's Up in Downshadow. Halls of Undermountain has three adventures plus some plot points that could be developed into another adventure in Waterdeep itself. I've also got the 3.5E Dungeon issues with Eric L Boyd's Vampires of Waterdeep trilogy. These adventures are far too high of a level for beginning PCs but I can certainly steal the maps, room descriptions, NPCs and some of the background.

And look at the map: 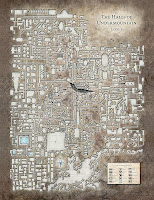 There's lots of room there for all sorts of dungeon-y goodness. I need to give some thought to "zones" and themes for those zones. That will make it easier to come up with material on the fly should the PCs wander off from the beaten path of the Halls of Undermountain adventures.

I have already mentioned Halls of Undermountain and the DDi adventure What's Up in Downshadow together with Eric L Boyd's Dungeon trilogy comprised of:


This is one of the pieces of art from the Dungeon 127 adventure that I definitely want to use:

In addition, I have the D&D Encounters season titled Halaster's Lost Apprentice. My favourite part of this is the stat block for a deformed and de-powered beholder runt. I am definitely going to use that!

Finally, there is a Backdrop - Skullport article published for DDi in the online version of Dungeon 200. I suspect that will also play a part.

Looking at all of this, it's plain that I have plenty of material for dungeon adventures but I also need to give some thought to city adventures plus possibly adventures in the wilderness outside the walls of Waterdeep.

I love this sort of preparation!

Putting It All Together

This is a placeholder for the moment.

I rather like the idea of a beholder as a BBEG as it is one of the quintissential D&D monsters as it was specifically created for D&D. And, of course, Waterdeep - more particularly, Skullport - has a long history of being influenced by beholders.

Vampires seem to be another possibility for a BBEG. They play a role - obviously - in the Vampires of Waterdeep trilogy and they also feature rather prominently in Halls of Undermountain. They're also a good monster to include with new players as they are well-known. (As these new players are Filipino, I think I might even include a penanggalan as that is a vampire-like undead from Philippine mythology.)

Beholders and vampires give me two factions but I also want a third faction. As my blog clearly shows, I rather like drow. I also like Ghaunadaur and the oozes, ropers and drow that follow him. It's probably a cop-out as I have so much material to work with already, but I think Ghaunadaur-worshipping drow will be my third BBEG faction.

And this is where the placeholder kicks in because I need to go back and read the source material I have selected to see if I can tie this all together.

Earlier tonight I noted that this month's DDi editions of Dungeon and Dragon are going to include, inter alia,  an adventure involving The Xanathar and an article about the Xanathar. There might be some good ideas for how to expand my preliminary notes above especially if I go the route of a Heroic Tier campaign where the ultimate BBEG is a (or the) beholder crime lord of Waterdeep.

It looks like I have a name for this campaign, even if it only turns out to be a placeholder:


Companions of the Yawning Portal

As I am uncertain of the group's ability to deal with really supernatural horror - as opposed to vampires - I will avoid using demons and devils and I will also avoid well-organised religions. Followers of Ghaunadaur are perfect for the latter because they really are more of a cult (although I may not use them).

I definitely want to include:
Of course, I will be including Waterdeep itself - more correctly, a subset of this enormous city - and I may also use the lands outside. Fortunately, Eric L Boyd wrote a tremendous web enhancement for 3.5E's Waterdeep: City of Splendours which gives a lot of information on the areas surrounding Waterdeep. Hmmm, I wonder if I can use Goldenfields....

The backstory of Halls of Undermountain is really the starting point of my plot. (Name) is trying to take over the noble house of (name). She is, however, but a pawn of The Xanathar who has decided it needs a noble house to act as a front on the surface world. Why is this? Demand for slaves in Skullport has increased markedly and The Xanathar needs to cast its slaving net much wider than it has before.

Another important consideration relates to determining what monsters to include. Obviously, I want a core of the basis evil humanoids - kobolds, goblins, orcs, hobgoblins, gnolls, lizardfolk, bugbears, ogres and trolls (and I should probably add drow to that list) - but I also need some D&D-isms.

I've already noted that I am going to use a beholder as the ultimate BBEG but here are some other monsters I should include even if simply to showcase different rules and different types of threats:
It's time to re-read my material about Skullport, Undermountain and Downshadow to see what else I can come up with.

Ideally, the climax of the campaign will occur at the end of the Heroic Tier and involve a grand melee against The Xanathar and some of its minions (which will be minions).

That, of course, is the climax for the characters. Just as importantly, what about the players? As this will be their first time playing I would - ideally - like them to be hooked. That means the climax is important because it needs to give all of the preceding events, encounters and adventurers meaning and also resolve all the hanging plot points and it needs to give them a real sense of accomplishment. After all, you cannot "win" in D&D: what I need to give them is a sense, though, that they have indeed won.

On that note, I think it is vital that the entire campaign be structured around quests. This is probably something that will come naturally to them from playing so many CRPGs but it also makes it easier for them to grasp that this isn't a variation of a first-person shooter but, rather, there is a story to be explored as well (which FPSs probably do these days, anyway).